Visiting La Rioja in Summer? Totally Spain asked long-term Riojan resident Tom Perry about visiting La Rioja during the summer. Having worked in the wine exportation business for almost four decades, he knows the La Rioja wine region and the industry better than most. Take it away Tom!

“Here in Rioja we really look forward to summer. After a long, cold, gray winter, summer is a time for midday naps, long early evening strolls, wine and tapas and weekend trips to the country.

Visiting La Rioja in Summer
“Lots of people here work in the Rioja wine business, so naturally we follow both the evolution of the vineyards and sales. By June, most of the work in the vineyards has already been done and the growers anxiously wait for Mother Nature to guide the vines through flowering, fruit set and ripening. This year was unusually wet, so farmers have been especially vigilant to treat the vines against oidium [a fungal spore] and mildew. What the vines need now is abundant sunshine, warm days and cool nights until mid-September when the harvest begins. 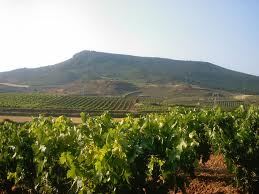 Summer is a quiet time for Riojan winemakers but not for the sales force in the wineries. About 60 per cent of annual sales take place during the last four months of the year so salespeople are working their customers to prepare for the busy holiday sales period. Wines are being moved from tank to barrel and to bottle, as fermentation and storage tanks have to be ready for the 2013 vintage.

In Rioja we say that the climate is nine months of winter and three months of hell, so keeping cool is a must. Spaniards have inherited, from the Arabs that lived in the Iberian peninsula for 700 years, the custom of opening windows at night to let in the cool air and closing them in the morning to keep the house cool all day. I remember the heat wave of 2003 when dozens of people in France died from heatstroke after throwing open their windows during the day, mistakenly thinking it would cool them off. Spaniards know better.”

How the locals holiday in a Rioja
“Vacation habits have changed a lot in the forty years I’ve lived here. In the past, husbands would take their families to their parents’ villages or the seaside as soon as school was out in mid-June, leaving them there until September. Except for weekend visits and a month in August, the husbands were alone in the big cities to fend for themselves. Since cooking was unfamiliar for most of them, they would eat at restaurants and go out for a few drinks at night. Men in this situation were said to be ‘de Rodríguez’. The story goes that if they ever struck up a conversation with someone from the opposite sex and were asked their name, instead of giving the real one, they said “Rodríguez”. The expression stuck. Nowadays, families divide up their vacations into smaller chunks and more and more women are a part of the workforce, so the three-month holiday in the village or at the seaside is a thing of the past, but people still flee the cities in the summer months. In fact, Spain is one of the countries with not only the highest rate of ownership of homes, but of holiday apartments as well.”

What to Do when visiting La Rioja
“With most locals away on holiday, summer is a great time for visiting La Rioja, as long as one understands that it can get really hot during the day. Winery tourism is becoming popular with hundreds of wineries catering to tourists. And the temperature inside the wineries is always pleasant and cool. A good source to research a trip is the Great Wine Capitals Global Network and the winners of their annual ‘Best Of Wine Tourism’ awards for the Rioja region. The Rioja Alavesa Winery Association also has an interesting site for wine tourism.” [Of course, you can contact us at Totally Spain to prepare a package – you’ll find our details at the end of the post].

La Rioja’s Wine Festivals
“If you want to see the locals at play, you shouldn’t miss visiting a festival in a Riojan village, where you can eat, drink and dance until the wee hours of the morning. Festivals almost always take place in July, August and September. This calendar of events and locations is useful when planning a trip. NB It’s wise to take a bus [or arrange a taxi or a driver] because the police are out in full force checking for DUIs [drivers under the influence].” 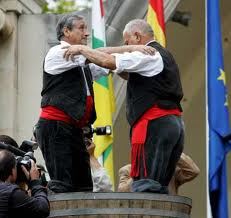 “If you’re into both wine and partying, the Rioja Harvest Festival on the third week in September is your best bet. Other wine-based festivals here are the Haro Wine Battle (which just took place on June 29), the Battle of Clarete in San Asensio on July 25 and the Rioja Alavesa Wine Festival, usually held in the middle of September.” 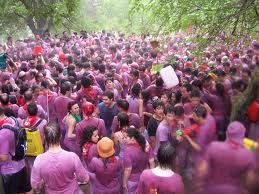 And for the Golfers…
“There are several championship golf courses in or near the Rioja region: El Campo de Logroño, just outside Logroño, Sojuela, a few kilometers south of Logroño near Entrena, La Rioja Alta near Santo Domingo de la Calzada and Izki Golf, a 30-minute drive north of Logroño near Bernedo in Álava just over the spectacular Cantabrian mountain range north of La Rioja.”

• The village of Laguardia in Rioja Alavesa, about 14 kms from Logroño;
• The wineries located near the train station in Haro: Muga, La Rioja Alta, R. López de Heredia Viña Tondonia, CVNE, Bodegas Bilbaínas, Roda, Gómez Cruzado and Rioja Santiago;
• Modern architectural masterpiece wineries: Bodegas Campo Viejo and Bodegas Olarra in Logroño, Ysios and Viña Real near Laguardia, and Bodegas Baigorri in Samaniego;
• Ezcaray, at the foot of the mountains south of Santo Domingo de la Calzada;
• The old town in Logroño, with over a hundred bars and restaurants. 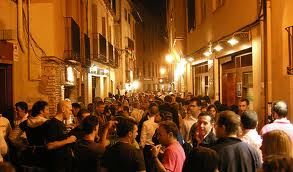 Cheers Tom! You can keep up to date with Tom, who works as a marketing consultant for the Spanish wine industry on his blog about the Riojan wine industry.

If you are visiting La Rioja, you might want to read our blogposts about La Rioja, La Rioja Alavesa and visiting Spain’s best wineries with art.