Paella is one of the most popular dishes from Spain and is always on the menu in Spanish tapas bars and restaurants abroad. If you are visiting Spain and want to try authentic paella, here’s what this Spain-based travel specialist thinks you should know…

The name ‘paella’ (pronounced pa-eya) is the old Valencian word for the flat frying pan used to prepare the dish. Today it’s often prepared with seafood but it started out as a very humble affair when it was first prepared in Valencia, the major rice-growing area in Spain as a cheap and convenient meal for the workers in the rice fields. You don’t have to travel to the Valencian countryside to taste this dish today – although we have done just that ourselves and adored the paella there. Just as you saw in our guide to Spanish tortilla, there are countless recipes for these Spanish classics. The order in which ingredients are added varies from family to family and region to region – but the basics are really very simple.

Short-grain rice is an essential. This is an easy task in Spain as it’s usually the only rice you’ll find on sale. You’ll see it called ‘arroz bomba‘ or ‘arroz redondo’. You might also come across the more expensive short-grain rice from Calasparra in neighbouring Murcia that is equally good. Some international recipes say it’s ok to use ‘arborio’ (the risotto rice) but we’ve tried and it makes the dish a bit too creamy. Internationally, it’s becoming easier and easier to source the Spanish short-grain variety and when you do come across it, buy a few kilos.

2 And the important seasoning – saffron!

In addition to onion and garlic, the seasoning is key. Saffron is the main spice although in Spain you can buy a paella spice mix that has a few extras added in. Saffron is an expensive spice and you might come across recipes that recommend turmeric or food colouring instead. Don’t be tempted – it’s not the same.

You can be very relaxed about the vegetable choices. You might consider using grated tomato, some peppers (roasted for presentation and raw for cooking) and green beans. And if you have a few frozen peas and an artichoke or two you could stick them in also.

Whether you choose a meat or fish paella or a mix, is up to you. Of course, you can leave both out and just make vegetarian paella which is delicious. But if you like to follow the traditional recipe, you’ll need some rabbit, chicken and snails (if available). If you’re going for the seafood option, you’ll need a combo of prawns, clams, squid and mussels. Many international recipes use chorizo but it’s never used in a traditional paella. If you like the chorizo taste, use the spice that flavours chorizo which is called ‘pimentón‘ or smoked paprika.

Many chefs say the stock makes the difference between a good paella and an excellent one. Your stock can be either fish or meat based (unless you’re making a veggie paella of course!) If you are feeling either adventurous or thrifty and making a seafood paella, you can make pre-cook some clams and use the juice, and peel a few of the prawns and add that to the clam juice and boil up with some other fish bones to make a decent and cheap stock. But if this sounds like a lot of hard work, don’t be afraid to keep it simple when starting out. 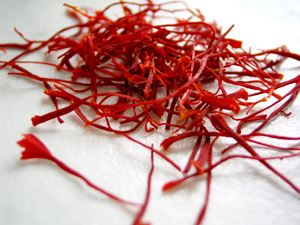 Saffron is one of the pricier spices but a few strands will make the difference. Photo credit: zoyachubby via photopin cc

Skin and chop the meat into pieces and season and brown it in oil. Move it to the edge of the pan when it is browned. Grate the tomatoes and place them in the centre with the white beans. Chop up the green beans and add them to the centre. Add the water, season and add the saffron and leave on a moderate heat for 18-20 minutes.

Taste for seasoning, and add the rice. Cook for 6-8 minutes on a high heat. Reduce the temperature and cook for a further 10-13 minutes. Add the rosemary for the final 5 minutes. Leave it to rest for 5-8 minutes, remove the rosemary, add the parsley and serve.

7 The Tools Necessary for Making Paella

You can start out by making paella on a non-stick frying pan. (No woks or curved bottoms – you want everything to cook evenly!) If you’re looking for the best results and a great dish to present the food in – you should consider buying a paella pan when here in Spain or you can order one online. There are dozens of stores selling paella pans and handy adaptors for gas and induction hobs and stands for cooking outdoors. They are quite reasonable and make a big difference because the ingredients all cook at the same time. 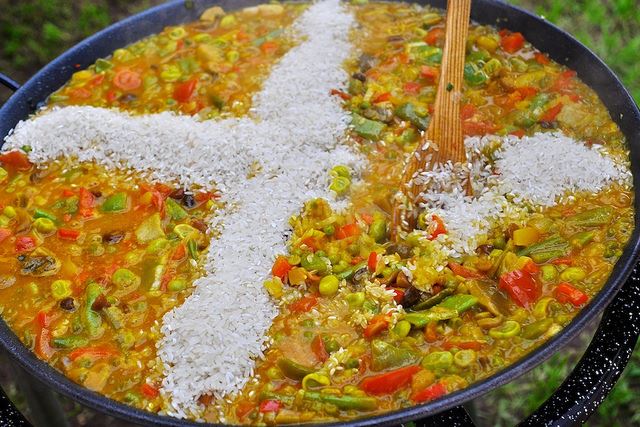 The rice goes in. You can stir now but only now. Photo credit: Mário Tomé via photopin cc

8 The Method to Making Paella
Above all else, don’t stir the rice. It’s not risotto. In fact the sticky glazed bits at the bottom of the pan are called ‘socarrat‘ and are very tasty and much sought after in Spain. A bit like crackling on a roast beef.  And remember to place a clean tea-towel on top of the paella for 5-10 minutes after it’s prepared to absorb the excess steam and help the rice to swell. A newspaper can also be used for this purpose!

9 Where to Enjoy the Best Paella in Spain

You don’t have to be in Valencia to enjoy good paella (but it helps). Remember when ordering paella out, that it takes about 40 minutes to prepare paella fresh and is usually made for a minimum of two people so if you are in a rush it’s not the dish for you. The exception here is when it’s part of a set-course menu or  ‘menu del dia’ and the cook will be turning it out in large quantities. If you want to have a perfect paella, we’d ask at the hotel for recommendations. Every town or city will have a few places that do it really well and it’s worth doing your research beforehand.

Of course, paella isn’t always about perfection. It’s also a relaxed party food in Spain. Most Spanish families will have a designated paella chef for occasions such as communions, birthdays and anniversaries. It’s a convenient party dish in the summer because the cook can have the ingredients pre-chopped and some of it pre-cooked that morning or the night before, and it can be all pulled together over a glass of wine or beer in the garden. Perhaps for this reason, rather like a BBQ, paella is often a party dish prepared by the guys.

And if we are talking about catering for large groups – when in Spain you should keep your eyes peeled for village fiestas that have a giant paella. It’s amazing to see the dish come to life before your eyes and the end-result is always pretty fantastic too. Here’s a video of Jamie Oliver making a paella for 500 people at a fiesta in Andalusia.

If you thought that was a big paella, have a look at the photo below of the Guinness World Record breaking paella in 1992 in Valencia which was 20 metres in diameter, and 1.7m in height – large enough to make paella for 100,000 people. Manuel Velarte of Paellas Velarte in Valencia was the man responsible. The ingredients included 1,000 litres of olive oil, 6,250 kilos of chicken, 2,600 kilos of rabbit, 400 kilos of duck, 1 kilo of saffron, 1,000 kilos of snails and 5,000 kilos of rice. As you can see in the picture, it was a feat of engineering as much as anything else. In 2001, the same man went onto to break his own record – this time with a 21 metre wide paella pan using 6,000 kilos of rice. It was prepared in Moratalaz, Madrid but none of the images are as striking as this one. 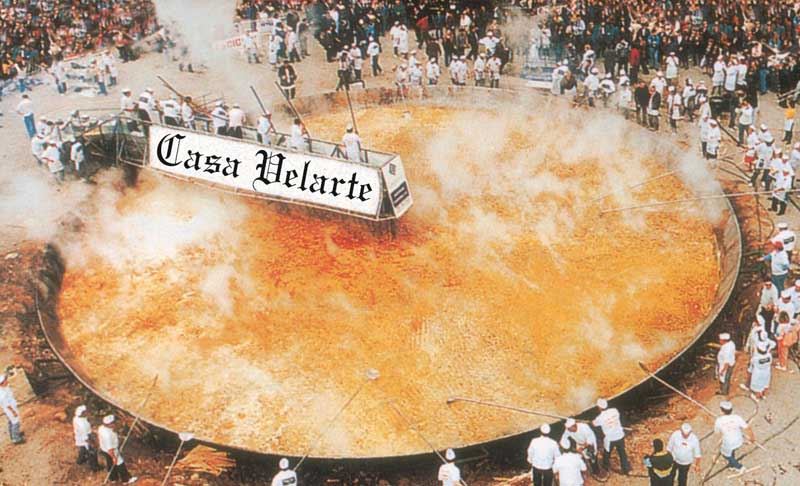 11 Other Rice Dishes in Spain

Paella is the most famous of all but there are a few other popular rice-based dishes such as fish soup called ‘sopa de pescado’, a rice stew known as ‘arroz caldoso’ or ‘arroz meloso’ and ‘arroz negro‘ which is rice cooked with squid ink. And there is the very simple ‘arroz a la cubana’ which is a plain-white rice dish served with tomato sauce and a fried egg.

Fideua is a paella style dish made using a vermicelli or thin pasta called ‘fideos’ instead of rice. It is often served with the garlic ali-oli sauce. It’s delicious. If you are a fan (and we are massive fans), you might want to see a clip from the Fideua Competition in Gandia (home of the recipe) held every year in June. 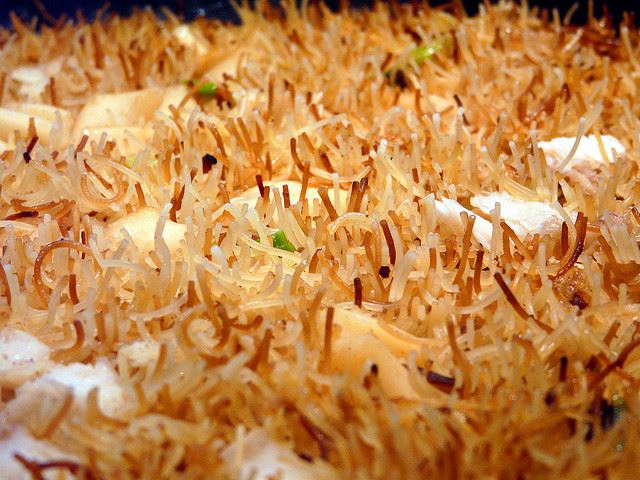 Fideua – or pasta-based paella instead of rice. We love the way it stands up. Photo credit: JaulaDeArdilla via photopin cc

13 What to Drink With Paella

If you’re eating seafood paella, it seems to make sense to have a white wine or rosé – although in Spain, you’ll find most people drinking a red wine with their paella. If you have the option of sangria, and it’s warm outside, it’s a great combination. If not, probably have a white with seafood paella, red with a meat and rosé with a mixed.

The region of Valencia is still a major producer of rice – and you should visit the Albufera National Parkland – one of the largest freshwater parks in Spain – to learn about the ancient cultivation traditions still in use such as the flooding of the fields. You can visit the village of El Palmar and eat some wonderful rice-dishes using local ingredients. And how about a relaxing boat-ride after lunch on the lagoon where you can enjoy the wildlife of the parkland? 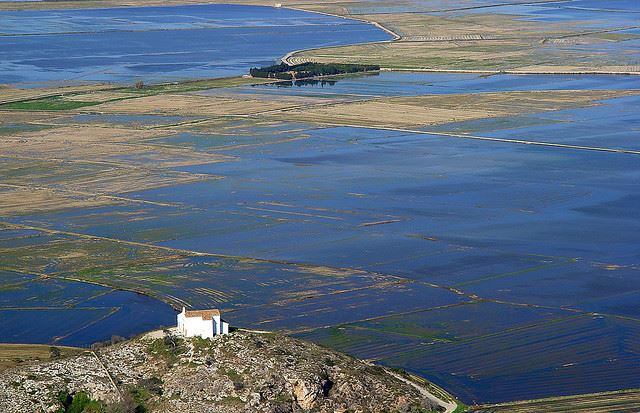 15 Learn How to Make a Paella in Spain

If you’d like to try making the perfect paella, we can arrange classes for you in a number of cities across Spain in either English or Spanish. You can start by shopping for the ingredients in the local food market and then you’ll see how the dish is prepared and finally, you get to make it yourself. Oh – and you get to eat it also. Mmmm! 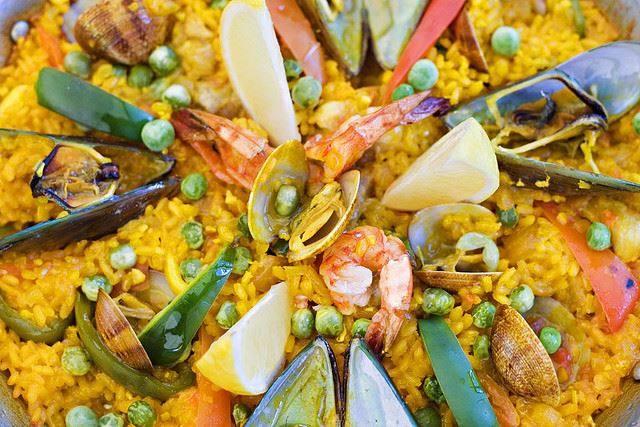 16 Planning a trip to Spain? Want to learn how to prepare paella in either Spanish or English? Would you like us to arrange a giant paella to be prepared for you (large groups only) if you a travelling through Spain? Or perhaps you want to visit the home of paella – Valencia and have us prepare some foodie visits to the rice plains and some great restaurants in the area. We have lots more foodie suggestions for you including why w recommending taking a food tour! Check out our other blogposts on Spain’s Gastronomy! And read about the nine other Unmissable Dishes you need to order in Spain.