If you love Spain, you’re going to adore Extremadura. It’s got everything you want from a trip to Spain – interesting history, stunning landscapes, a blend of old and new architecture, and amazing food and fun. Although you may not be familiar with the name – it’s a popular destination with Spanish tourists for its Roman ruins and its connection with the Discovery of the Americas. See what we recommend to our Totally Spain clients when visiting Extremadura and start planning your trip!

An Insider Guide to Extremadura

It’s impossible to describe the beauty and majesty of the UNESCO-listed city of Merida that dates back to 25 AD. Its Roman treasures include the Temple of Diana, the amphitheatre, The Roman theatre, the 792 metre long Roman bridge and the Concatedral of Santa Maria. We recommend you read the UNESCO page on Merida which contains detailed maps, photos, videos and much more. It is an amazing place. 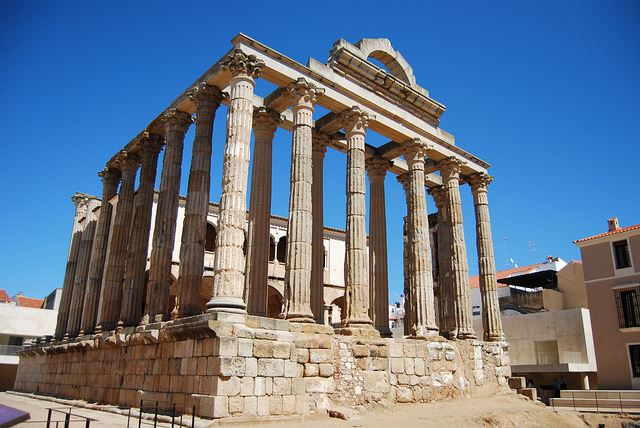 The Templo de Diana in what was then called Emerita now Merida. Photo credit: Rocío Martínez P. via photopin cc 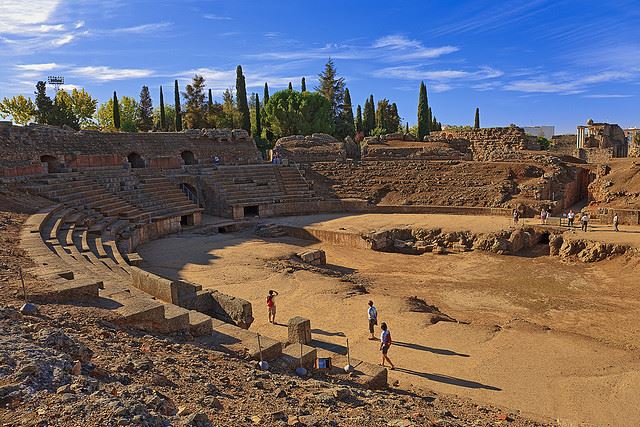 2 The City of Caceres to Experience Mediaeval Spain

Walking around the old town of UNESCO-listed Caceres is like walking through a history of the middle ages. You’ll love Plaza San Mateo and Plaza Santa Maria. And see whether you can find the 30-plus towers from the Muslim period of rule. Again, consult the UNESCO website for the architectural specifics. Stunning! 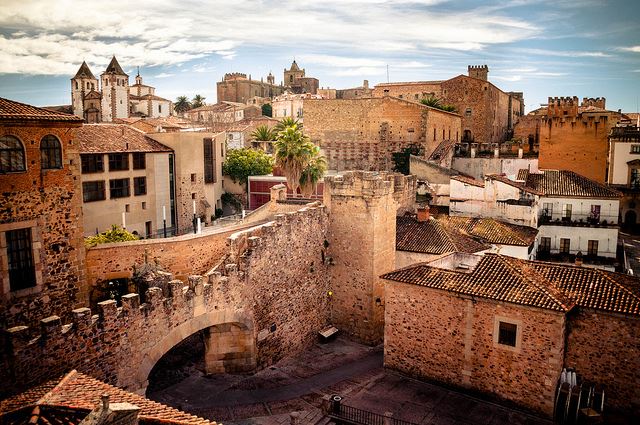 Caceres – where architecture tells the history of a city perfectly. Photo credit: Twisen33 via photopin cc 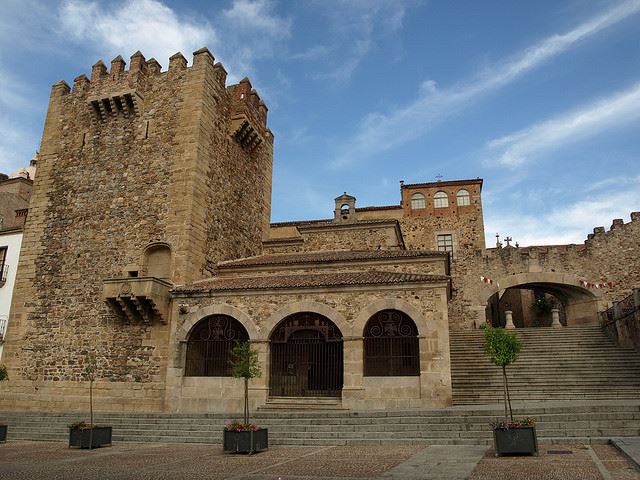 The Bujaco Tower in old Caceres city is one of the many fortifications and towers open to the public. Photo credit: TonioMora via photopin cc 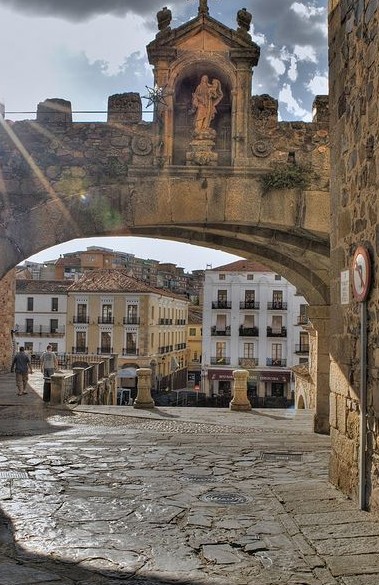 The Arco de la Estrella or Star Arch is the main entrance to the walled city of Caceres. Photo credit: Dieg082 via photopin cc

3 The Monastery of Guadalupe for its Art Collection and Architecture

The third UNESCO-listed site in Extremadura is Guadalupe Monastery – which is not only an exceptional architectural site where you can examine sections from each century dating back to the 1300s, you can also enjoy artwork by Zurburan, El Greco and Goya. Get the maps, images and architectural observations from the UNESCO website. 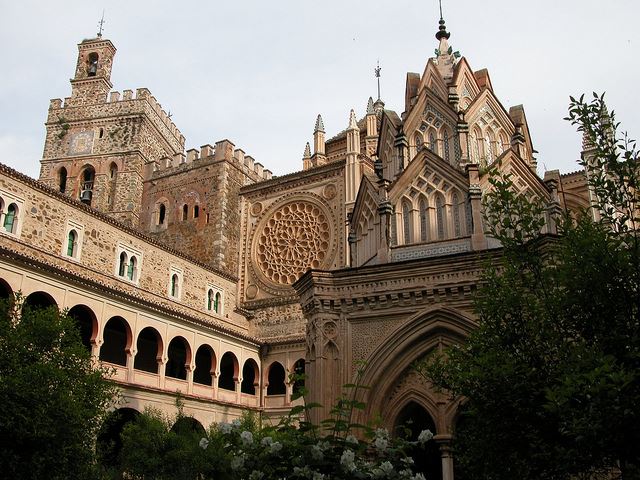 The Royal Monastery of Santa Maria de Guadalupe where Christopher Columbus visited before and after discovering the New World. Photo credit: james_gordon_losangeles via photopin cc

4 The Monastery of Juste for its Royal Connections

Following his abdication from the throne in 1556, Charles V retired to the Monastery of Yuste in Extremadura where he died two years later. His body was buried in the monastery church but are now at El Escorial in Madrid. The monastery, including Charles V’s apartments, is open to the public and is well worth a visit.

You might also want to see what is now a Parador at Jarandilla de la Vera, just 10km away from Yuste. In 1556, it was the castle and home to the Count of Oropesa who opened his residence to Charles V for three months while reformation work was being carried out at the monastery at Yuste.

If you are interested in Spanish royal history, you probably know that Ferdinand II of Aragon died beside the shrine to Guadalupe in Madrigalejo in 1516, on his way to Seville. Guadalupe had been an important saint for the monarch especially in the discovery of the New World. The shrine can be visited and the house, Casa de Santa Maria, where he wrote his final will and died, is open to the public. His body was taken to Granada to be laid beside that of his first wife Isabella. 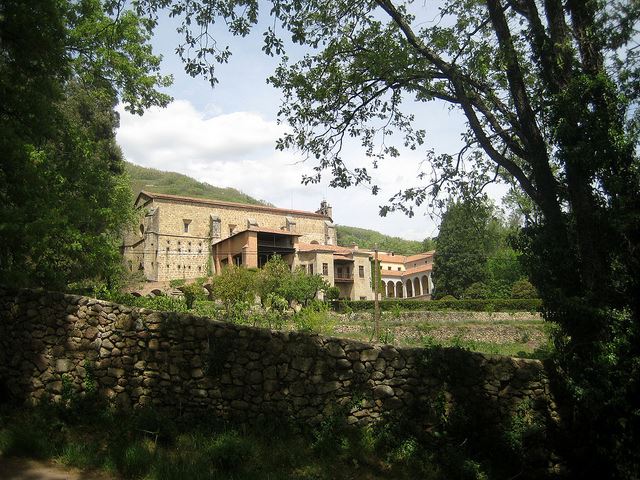 If you’ve ever read about Hernan Cortes, Francisco Pizarro, Pedro de Valdivia, Vasco Nunez de Balboa and Hernando de Soto, you’ll have heard of Trujillo – the town that is labelled the cradle of the Conquistadores – also referred to (and very worthy it is of the title) as the gem of Extremadura. This walled city is stunning. Just by sitting in the Plaza Mayor or by walking around the Palacio de la Conquista you can see and sense that chapter of history. Don’t miss the Iglesia de Santa Maria la Mayor. 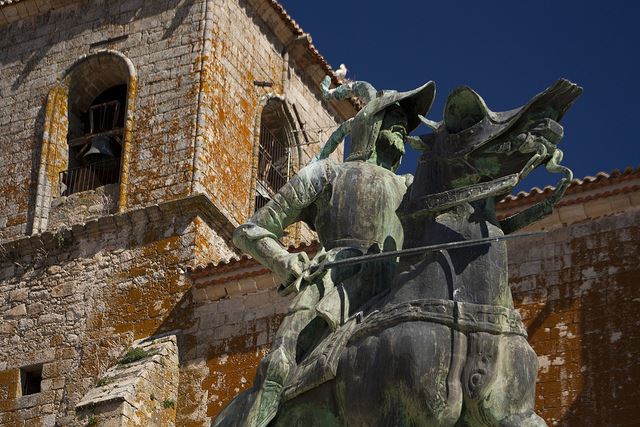 A statue to Pizarro the conquistador in Trujillo, Extremadura. Photo credit: hgomezherrero via photopin cc 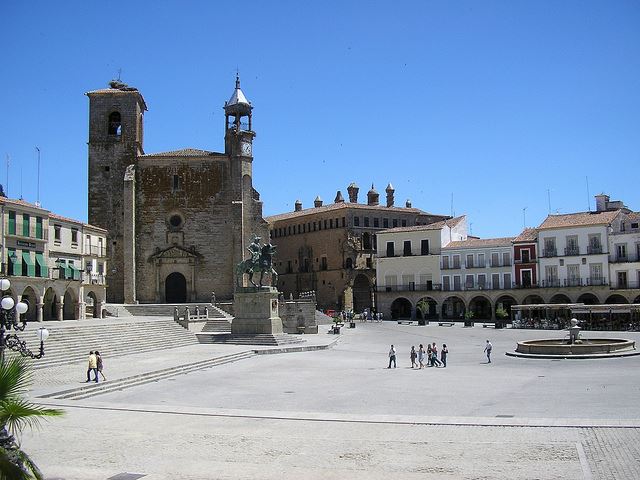 The Plaza Mayor in Trujillo – the gem of Extremadura. Photo credit: Nigel’s Europe & beyond via photopin cc

6 Monfragüe National Park for its Wildlife and Rock Formations

Only a small section of this parkland is open to the public but don’t let that put you off. There are great walking and driving routes and the viewpoints offer excellent bird watching including rare species of vultures, eagles and owls. Keep your eyes peeled for otters, wild boar, foxes and deer also. If geological rock formations and cave art are of interest, you’ll be kept happy too. 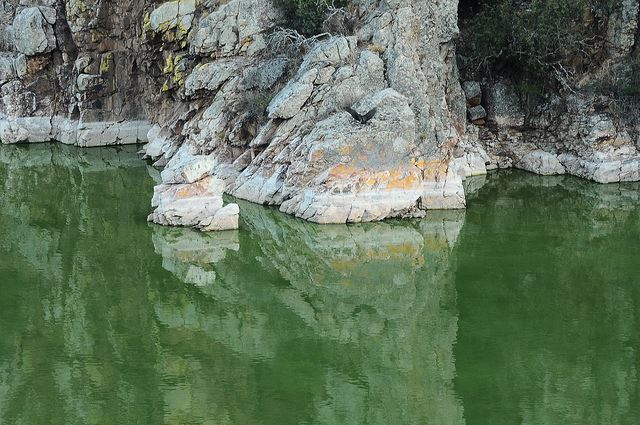 7 The City of Badajoz for its Citadels, Castles, Walls and Towers

On the borders of Portugal and in between the regions of Castille and Andalusia, Extremadura has more than its fair share of castles, towers and other battle-ready buildings. La Alcazaba citadel in Badajoz city (which is just 6km from the border with Portugal) is a history lesson in itself. It started out life in the 12th century and the passage of time has been recorded inside and around the walls in terms of purpose (from mosque to cathedral to hospital) and style of architecture (you’ll see Roman, renaissance and mudejar)

And if castles are your thing, you should also try to visit the castle at Trujillo. And the fortress at Olivenza on the border with Portugal, and the castle in the village of Fregenal de la Sierra in Badajoz that defends the road to Seville is also interesting. If you’re looking for an impressive keep, visit the Castillo de la Luna (dating from the 13th century) near Alburquerque which has been a youth hostel since 1945. The five-storey keep is striking. Further North into Castile, you’ll also find dozens of castles and alcazars which we have written about here. 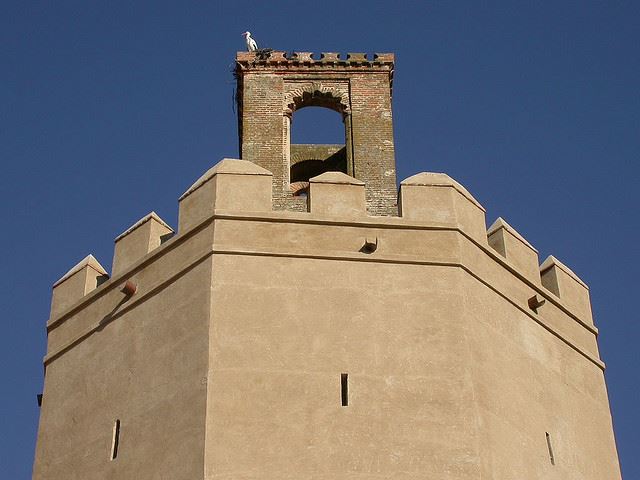 A stork perched atop the Atalaya Tower in the Alcazaba area of Badajoz. Photo credit: Paco Vila via photopin cc 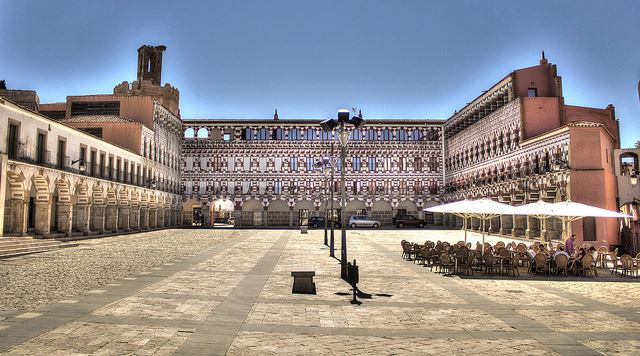 Inside the citadel in Badajoz. Photo credit: Philips Communications via photopin cc

8 Modern Extremadura – Just as Exciting as the Roman, Medieval and Renaissance parts

It’s not all about Roman and renaissance buildings. Those into the 21st century architecture will have plenty to see also – for example The Bus Stop in Casar de Caceres and Hotel Altrio in Caceres, the platform beside the Temple of Diana in Merida, and the Congress Centre on the site of an old bull ring in Badajoz. If modern architecture and its interaction with older surroundings interests you, there’s a great video by El Pais journalist Anatxu Zabalbeascoa in English here. 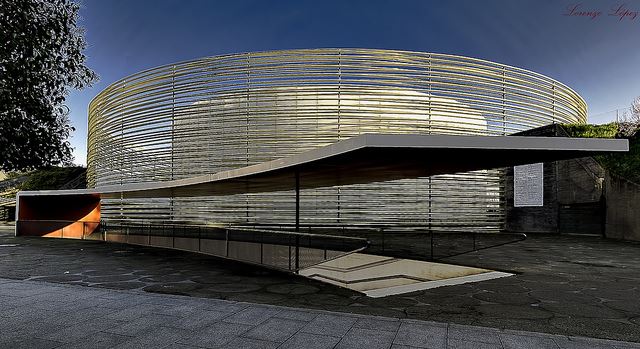 The new conference centre on the site of an old bull ring in Badajoz. photo credit: Lorenzo Lopez Photography via photopin cc

Food is the way to most of our hearts and Extremadura doesn’t disappoint. If you like you jamon you won’t find better  – especially in the area around the Sierra de Montánchez. And if you haven’t tried the Torta del Casar sheeps cheese, try it this very week. It’s a wonderful creamy texture – that’s perfect as a starter for a dinner party. Make sure it’s served warm – just cut of the top and use the cheese itself as its own serving dish. Of course, you’ll know pimenton de la vera as well. That’s the red spice that gives so many Spanish dishes its colour and an extra depth of flavour. You might also like to try migas or crumbs. If you see game on the menu in Extremadura, it’s a great place to try it. And fruit – especially figs, melons and cherries, when in season, are spectacular. 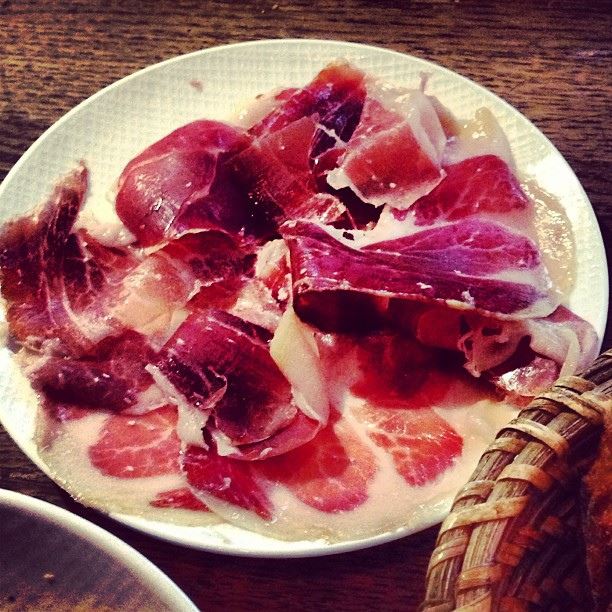 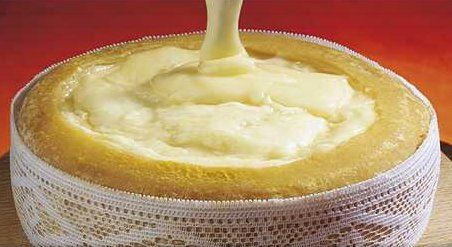 The creamy Torta del Casar is made from the milk of Merino and Entrafino sheep that graze on acorns and fresh grass. Photo credit: extremaduradirecto.com

Planning a trip to Extremadura?

You might like to check out our Seven Nights Enchanting Extremadura Tour. We can arrange tours to the sites, drivers to get around, tickets for the festivals and our course, excellent accommodation options. We always recommend visiting artisan food-producers and in Extremadura can arrange a visit to a cheese maker. We can also arrange a wine and jamon-tasting session. If you’d like to learn how to prepare regional dishes and get the most from the local ingredients we can also organise a private cookery class. Or what about a travel programme that starts in Madrid, stops off in Extremadura and finishes up in Lisbon?