We are huge fans of a busy city break or a long weekend of pampering but sometimes our bodies and our brains need a complete change of pace, a place to de-compress from our busy schedules, in a location where time seems to last longer or has stopped altogether. When we need one of those days, we know just where to go  – one of the many beautiful walled towns in Spain. That’s where we put all our day-to-day concerns on hold, we step back in time and really absorb the history and the architecture. We’re not talking about sleepy hollows or museum-like communities. Spain’s walled towns are lively places where real families live and go to school and run businesses. Here’s our list of Spain’s most interesting and enjoyable walled towns  – perfect for a daytrip or that mid-week break you’ve been promising yourself for ages.

The Romanesque walls of Avila from the 12th century have been listed as a national monument since 1884 – and if you walk the perimeter which is 2516m long taking in the 2,500 battlements, 87 towers and 9 gates, you’ll agree it is pretty remarkable too. Check out this great website to see wonderful pictures of the walls today and in the past.

Useful for protecting against epidemics, controlling trade and of course, keeping out the enemy, today the Castilian walls are one of the main reasons for this town’s appeal to day-trippers from Madrid. Inside and outside the gates, you’ll find the other reason – dozens of churches as this is the place from where St Teresa of Avila established her ‘barefoot’ or reformed Carmelite convents. This year, you’ll find more visitors than ever as the churches celebrate the 500 years since Teresa’s birth in 2015. As you explore the walls and the Museums and churches, make sure to stop at one of the many pastry shops selling ‘yemas’ which are made in honour of St Teresa. Avila is included in our Best Day Trips from Madrid post. 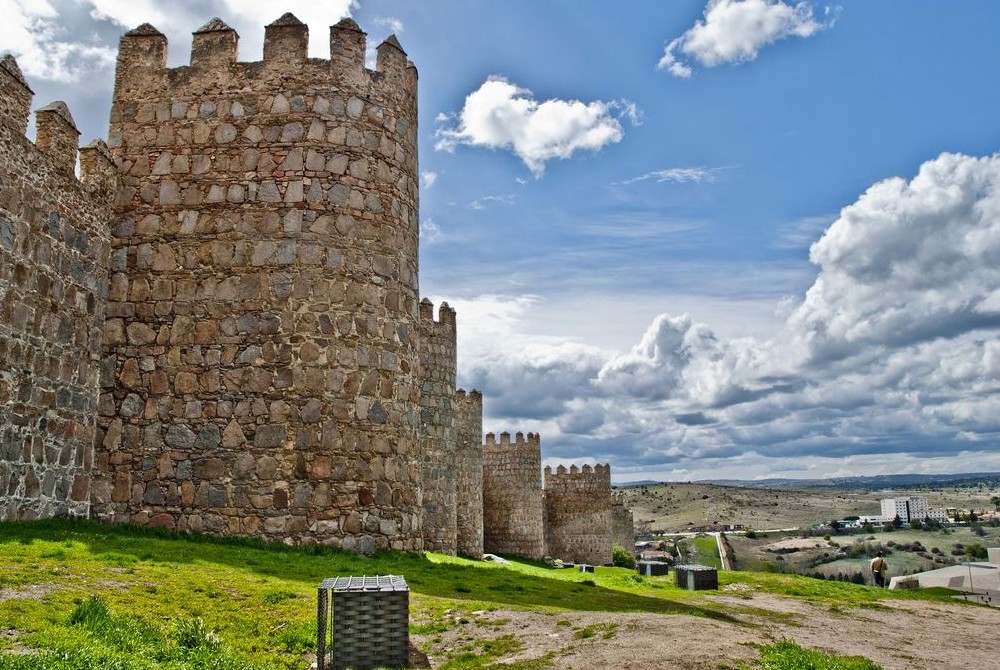 These 12th century walls of Avila have been listed as a national monument since 1884. Photo credit: Murallas de Ávila via photopin (license) 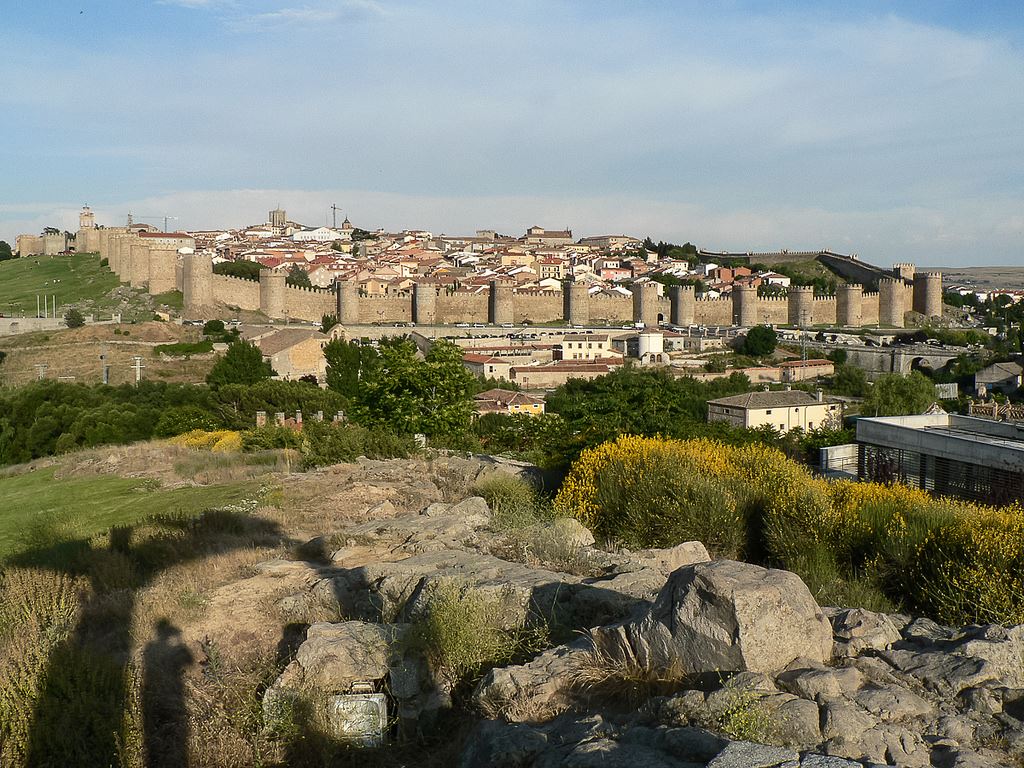 The UNESCO-listed Roman walls of Lugo date from the third century and were built to protect the old city of Lucus Augusti, founded in 15-13 BCE, from the Moors and Barbarians. The entire circuit measuring 2km long is intact and features close to 100 towers, 46 of which are in great repair. Although impressive looking, the walls did not prevent the city from being taken by the Visigoths, Moors and Normans. Visit the 10 gates and stroll down the impressive parapet walk (which you can see in the photo below) as you absorb the history of this great small city in Galicia which is a 90mins drive from Santiago de Compostela. 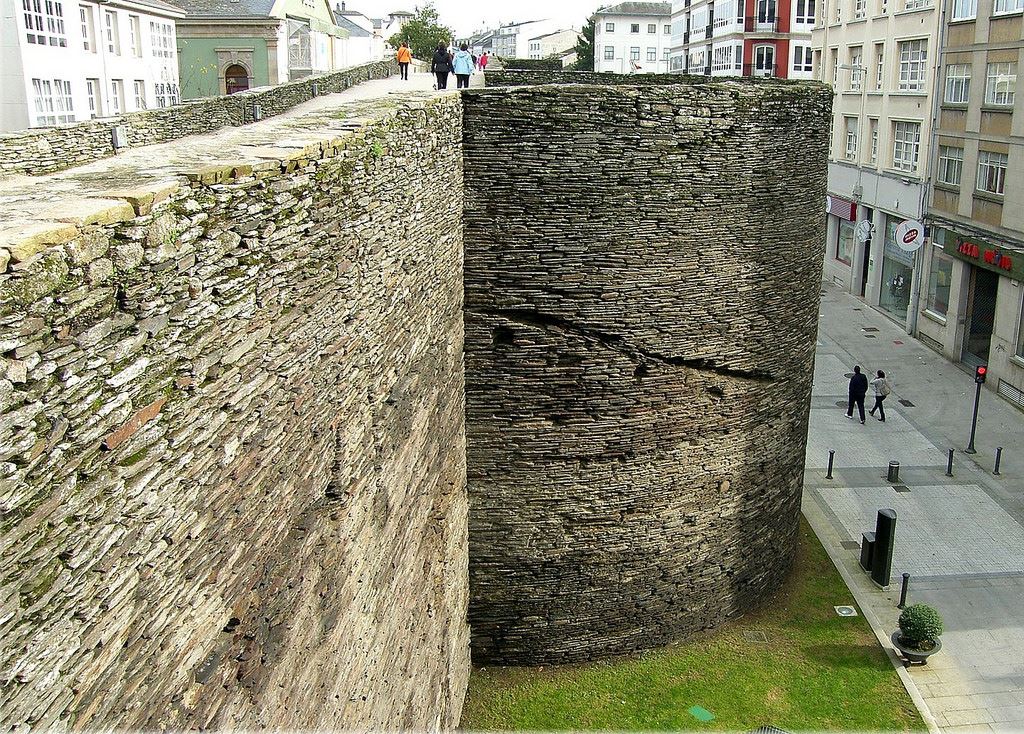 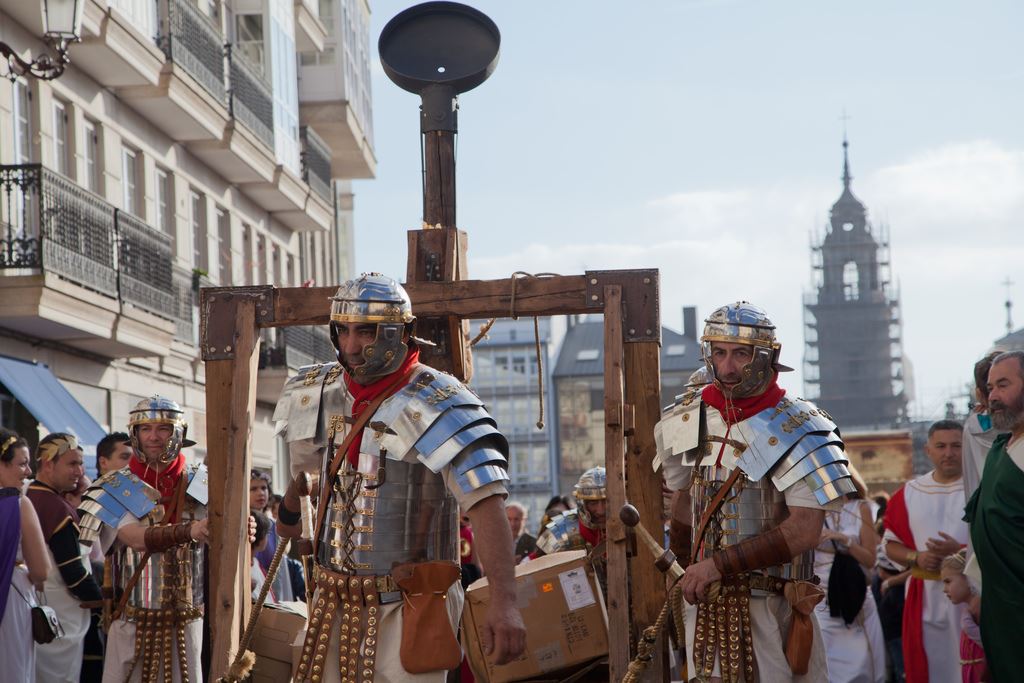 You can’t beat a good re-enactment to really show off a medieval town! Here’s one called Arde Lucus held every June in Lugo. Photo credit: Onager via photopin (license)

You might know this stop on the Costa Brava coastline for its beaches but it’s hasn’t always been so welcoming. In the 12th century, the town was walled off to protect it from attack. The ‘Vila Vella Enceinte’ is still fortified and many of the beach-goers enjoy exploring the town’s original perimeter, the turrets and parapets. The old castle was unfortunately replaced by a lighthouse in the 19th century when it became more important to demarcate the coastline rather than protect it. A nice day trip from Barcelona – at just 100km or 75 mins. When in town, check out the statue to Ava Gardener overlooking the beach. She was in Tossa del Mar to film ‘Pandora and the Flying Dutchman’ in 1950. We’ve provided a trailer of the movie on our post on Totally Spain’s Guide to Popular Movies Filmed in Spain here. And you can also find lots more ideas here over on Travelling the Costa Brava. 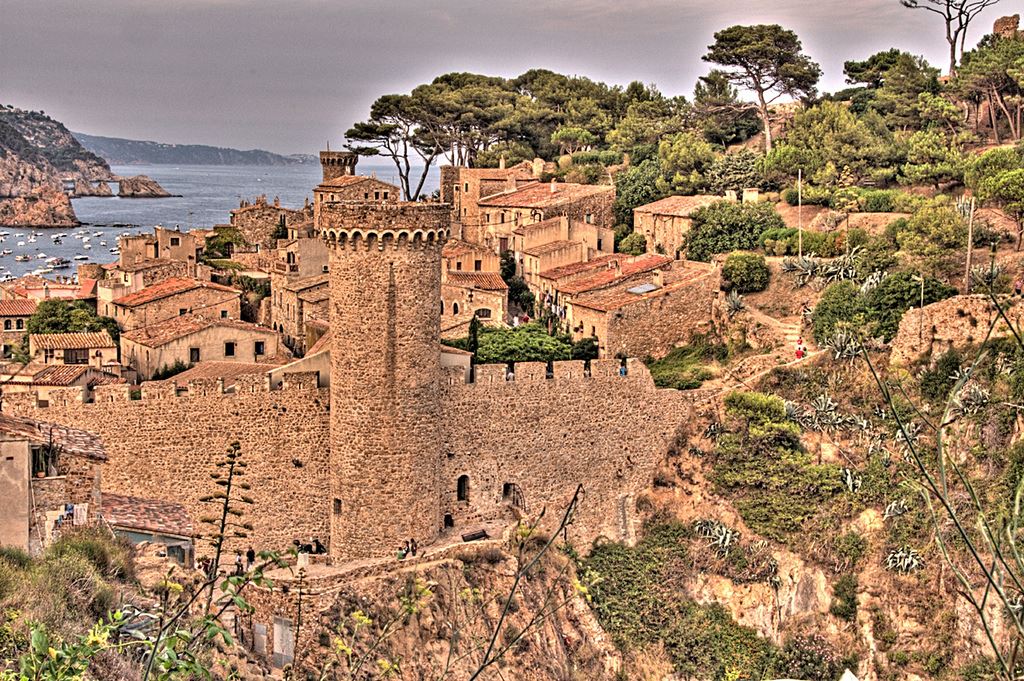 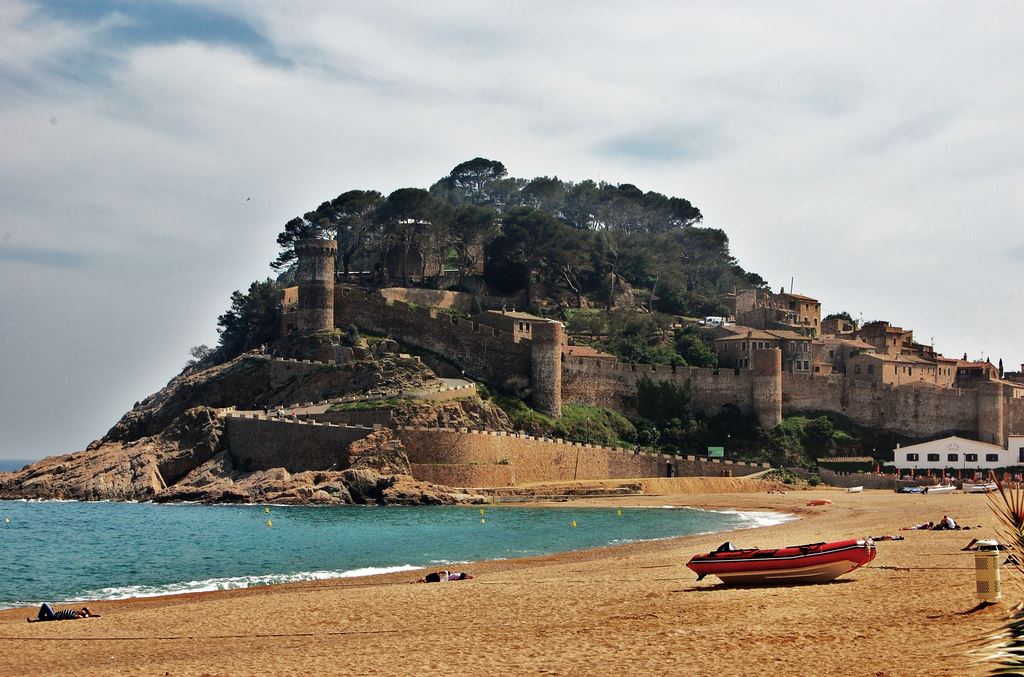 We have so many reasons for recommending a visit to Toledo. This small fortified city is an easy day trip from Madrid and in addition to seeing a stunning medieval town that was home to large Christian, Jewish and Islam communities,  it was the seat of Charles V, and is the best place to see El Greco’s work. And we haven’t forgotten the walls – we love the Puerta Vieja de Bisagra – the Old Hinge Door – which dates from the 10th century and is the only surviving remains of the Arab wall. It should not be confused with the Puerta de Bisagra Nueva dating from 1559! Toledo is one of our recommended Day Trips from Madrid. 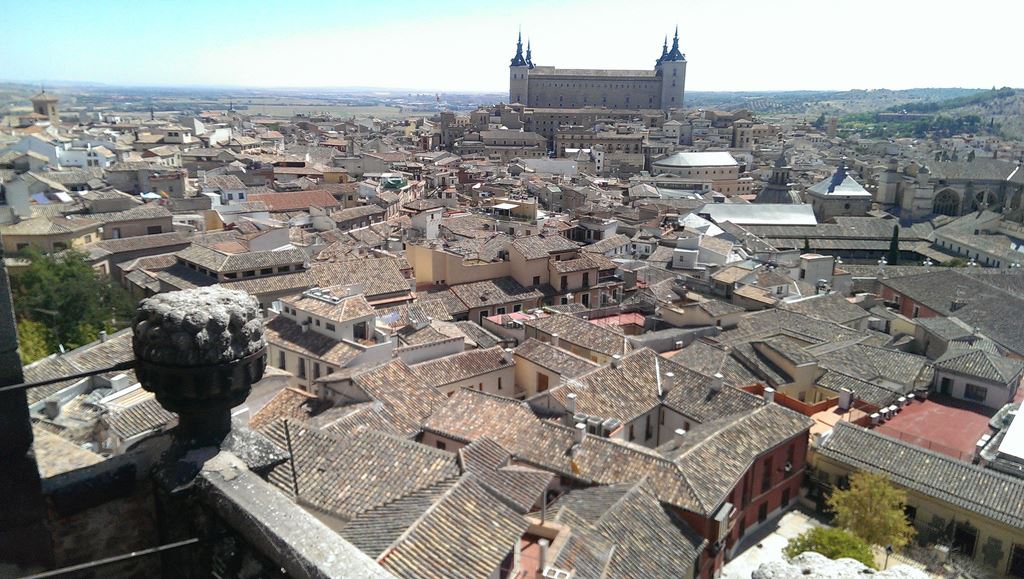 Inside the walls at Toledo Spain with the Alcazar in the distance. Photo credit: rooftops in Toledo via photopin (license) 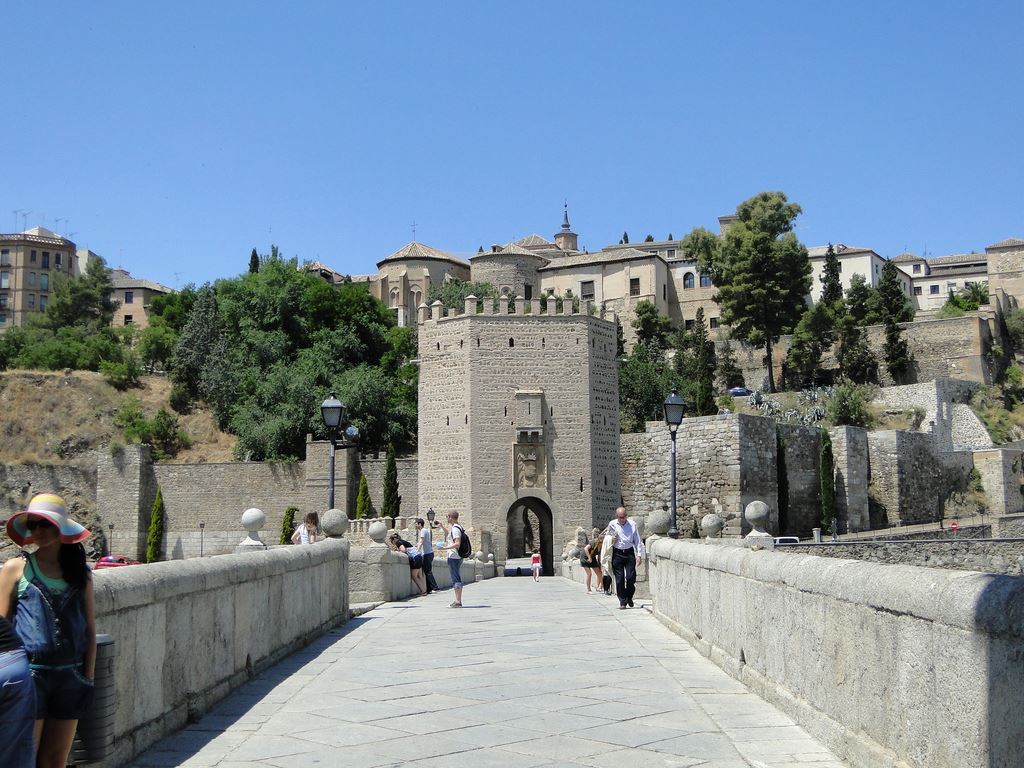 The curious agricultural town of Cuellar offers a charming glimpse of medieval life in Spain’s Castile. We know its walls pre-date the 13th century as King Alfonso X is recorded as having asked whether the collection of taxes could be used to repair the walls. What you see today, is the fruit of the strengthening of the walls undertaken in the 14th and 15th centuries. The most curious thing about your visit will probably be when you see students emerge from the castle which houses a tourist office and a secondary school! Now that’s one way to put history in the curriculum. At just under 2 hrs from Madrid, it’s worth visiting in conjunction with the nearby Coca castle (see our post on the Castles of Spain) or as part of a Ribera del Duero winery trip. 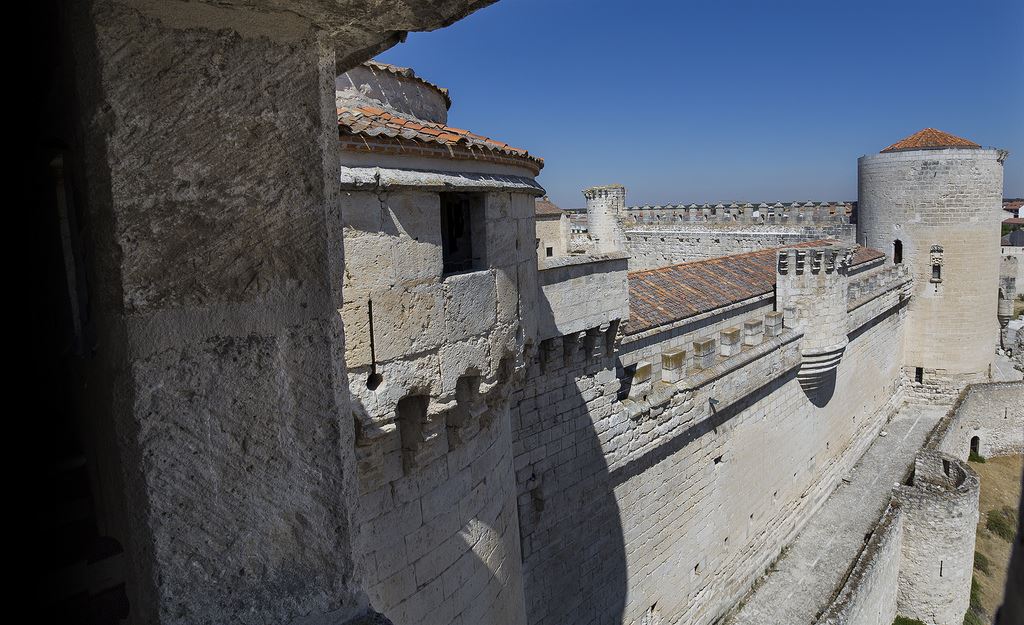 The walls at Peñafiel are actually the facade of an old castle that overlooked the Duratón and Botijas valleys. Built in the 15th century, the current castle has been listed nationally since 1917. The town is actually outside the walls and castle but don’t let that put you off visiting. The old square is beautifully rustic and of course, the Wine Museum inside the castle is also well worth some time  – as this is the exclusive Ribera del Duero wine country. Make sure to take part in a tasting inside the museum. Just as with Cuellar, you can also factor in a visit to Peñafiel as part of a Castles of Spain or Ribera del Duero winery trip (see above). 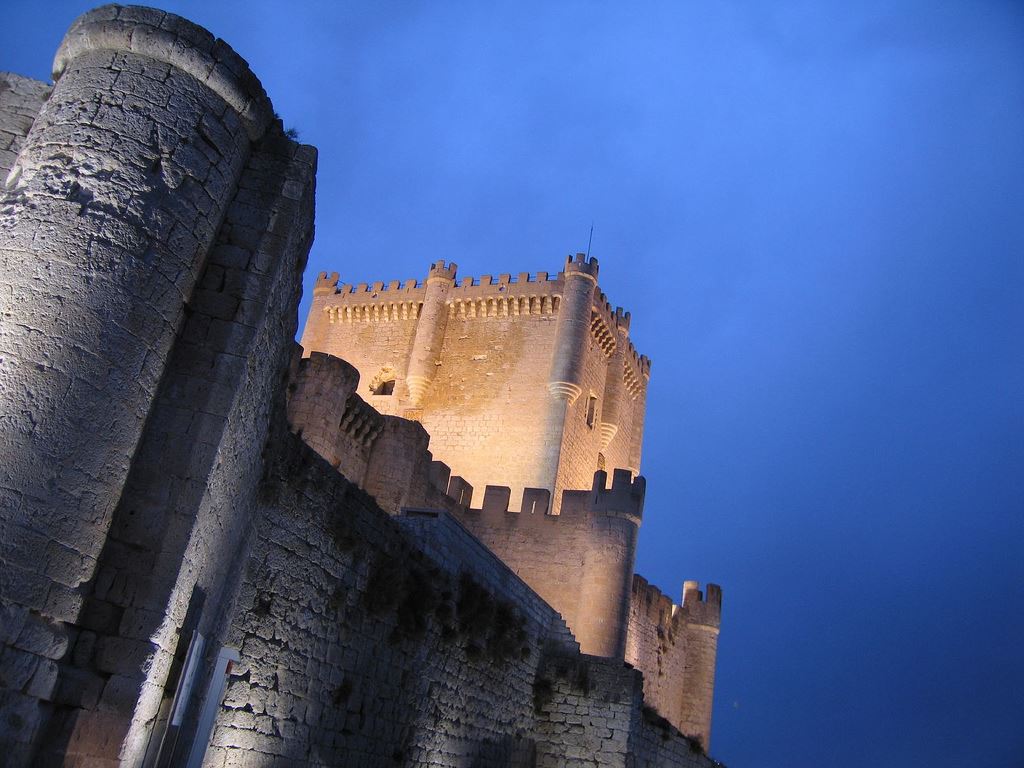 The walls of Peñafiel are actually the old walls of a previous castle. Photo credit: 17392 Castillo de Peñafiel, Valladolid via photopin (license)

A beautiful place to spend a day – this restored Medieval town in Aragon is every photographers dream. Wonderful curling streets set into the side of a hill. An impressive castle and cathedral. Lovely wooden beams on all the houses which are clad in a ruddy coloured plaster. There’s lots for historians to digest here from the Middle Ages plus a chapter on the Spanish Civil War to take in. And the walls – we love the walls. It’s not exactly a hike but you will need comfortable shoes as the track up to the perimeter is very rough and ready and not suitable for people with reduced mobility or buggies. But if you are nimble, the views from the top will reward you for your efforts. Clocking in at 3.5 hrs from Madrid, it’s a bit of a drive. We’d recommend it as a daytrip from Cuenca (2 hrs away) which also boasts some pretty spectacular walls. Cuenca is another of our recommended Day Trips from Madrid. 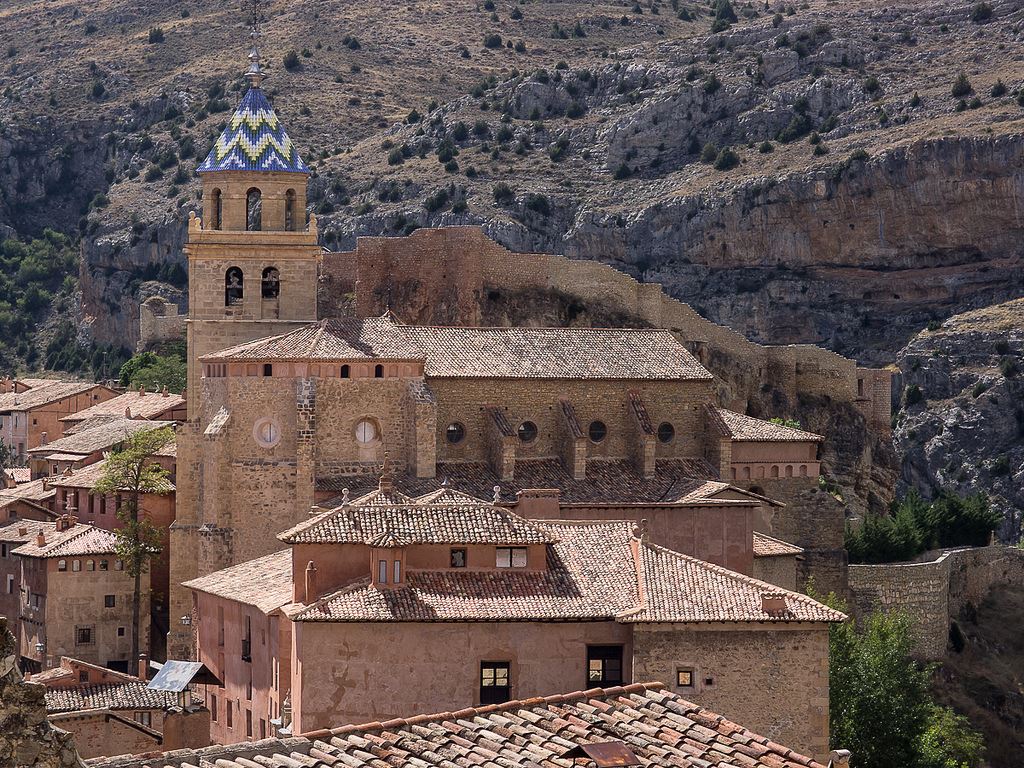 Being big fans of the world-class wineries in La Rioja Alavesa, we adore the medieval look and feel of Laguardia in the Rioja Alavesa countryside. We’ve written about it in detail in our guide here and recommend everybody visit at some time in their lives. Today, Laguardia’s 12th century walls protect the town from traffic and noise rather than protecting it from attack. Only tractors carrying grapes are allowed inside the gates which makes it a great place to visit with small children who can wander the streets freely. It’s a 2hr drive from San Sebastian and just 1hr20mins from Bilbao. 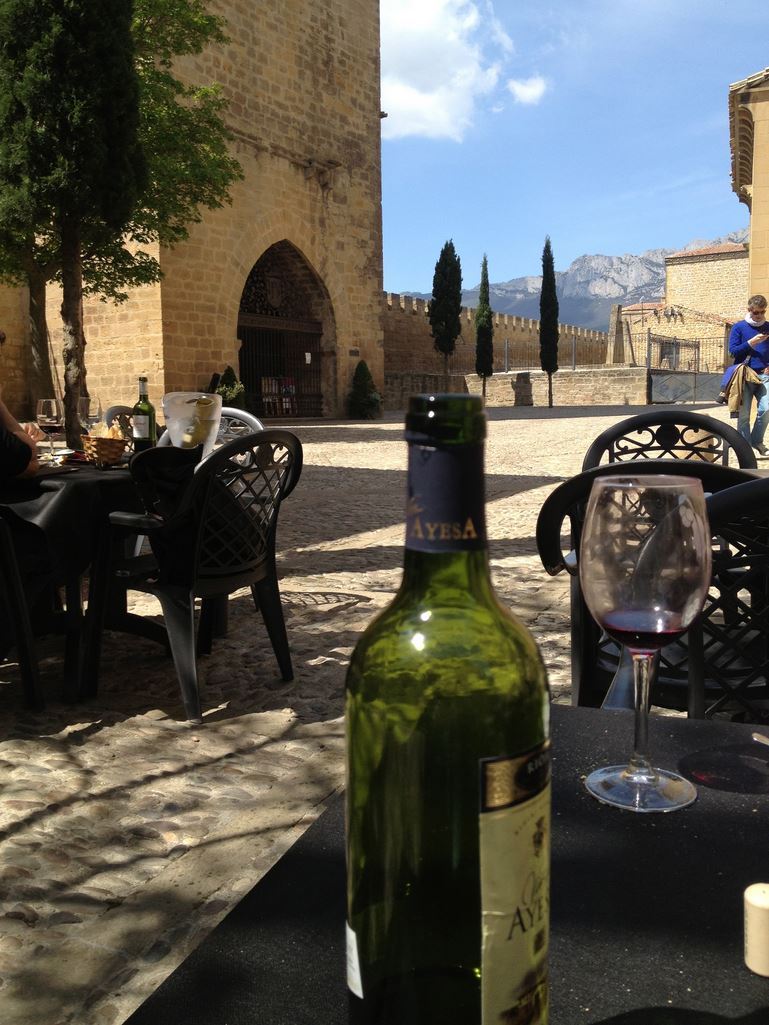 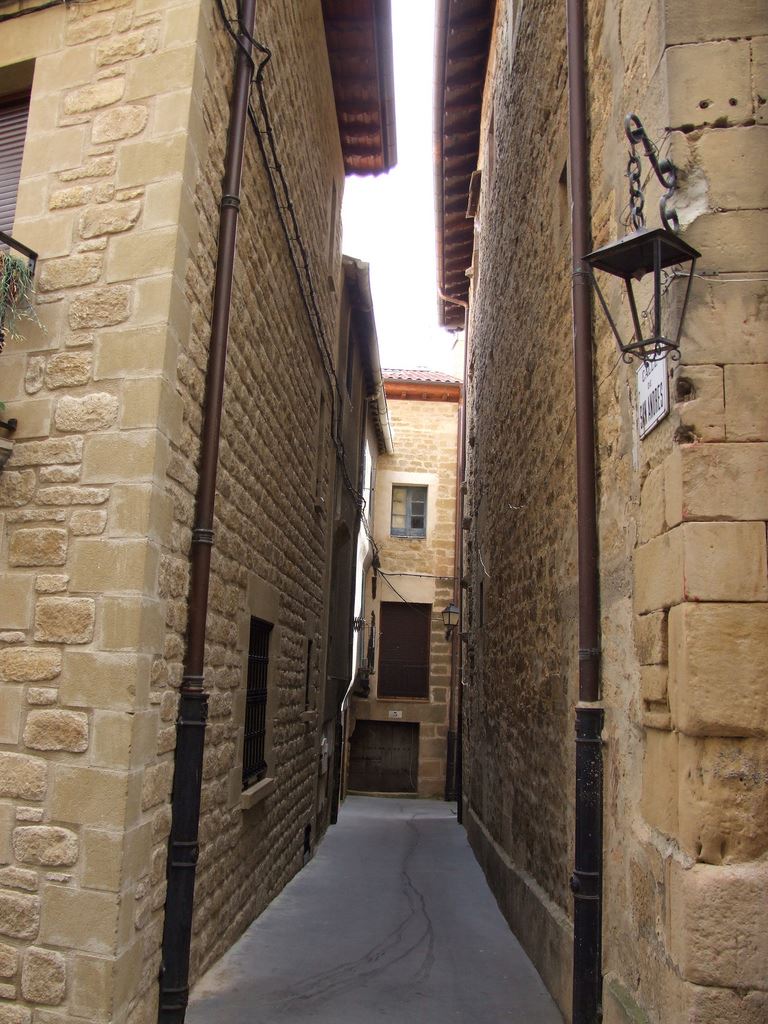 One of Laguardia’s narrowest streets – you can see why it’s not open to cars! Photo credit: Calle Estrecha via photopin (license)

You probably don’t know this but the World’s Walled Town of the Year in 2008 was Labraza in Spain. It’s on the border of Navarre with the Basque Country and only 15 mins from Rioja’s capital Logrono. You can see some images of it here. If you are a fan of wineries and enjoy stepping off the beaten track, we can’t think of a prettier and more unusual place to do this. The town’s walls and towers date from the 15th century with the majority of the 55 houses dating from the 16th century. It’s tiny – just three main streets which makes it the Basque Country’s smallest medieval town. In recent years the town has embarked upon a tourism drive and has staged open air plays featuring actors in period costume. Although it is hot in the Summer here- the town’s fiestas in the first week of August is when everybody with family connections comes back to party with the town’s 300 year-round residents. Just like Laguardia, Labranza has a number of underground wineries operating inside the town walls. But unlike Laguardia, there are not officially open to the public – but if you’re really keen, you could probably convince one of the 300 locals to open up their cellar for you! Labraza is a 50 min drive from Bilbao and also 50mins from Laguardia. You can read about the nearby Rioja wine region also.

On a tight timetable but want to see as many of Spain’s walled towns as possible? Fly into Madrid and visit Cuellar, Penafiel, Toledo and Avila. You should also check out our post on Castles and Alcazars near Madrid and Daytrips from Madrid. 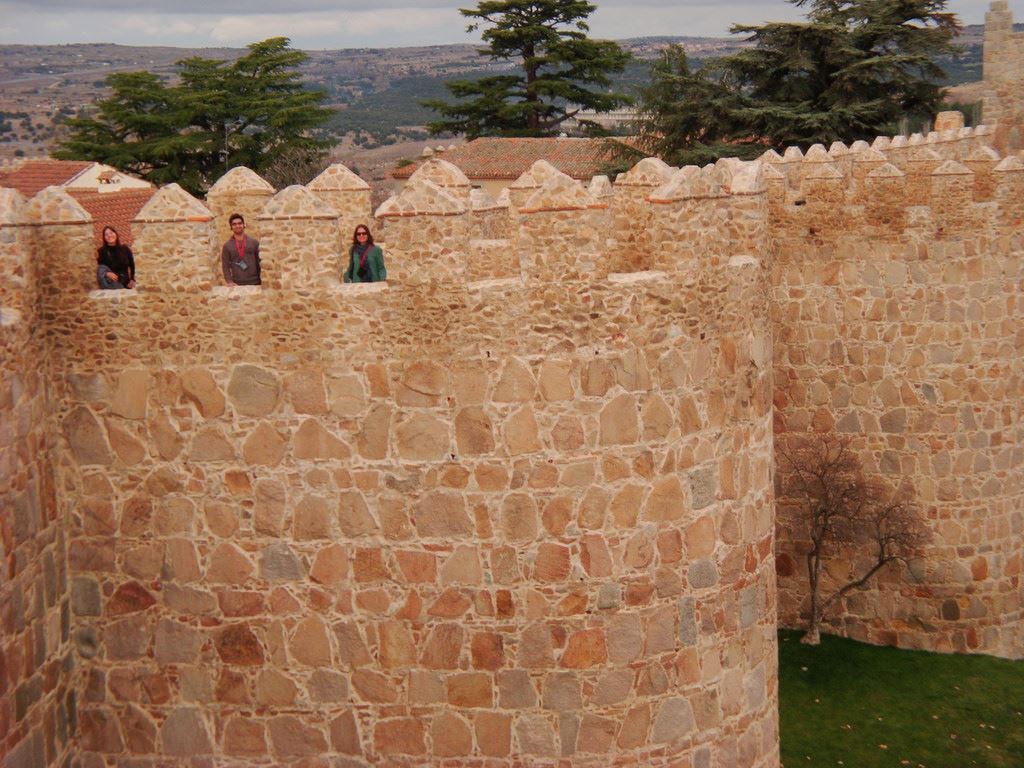 Larking about in Avila – there’s something very comforting about being surrounded by walls that are hundreds of years old! Photo credit: DSC04678 via photopin (license)