Planning a Spain vacation and looking for guidance on what Spanish cheeses to order, buy and eat? We’ve been planning gastronomic tours of Spain at Totally Spain since 2000 and suggest that you seek out and try a chunk of each of these very special Spanish cheeses below!

Top Cheeses to Try in Spain 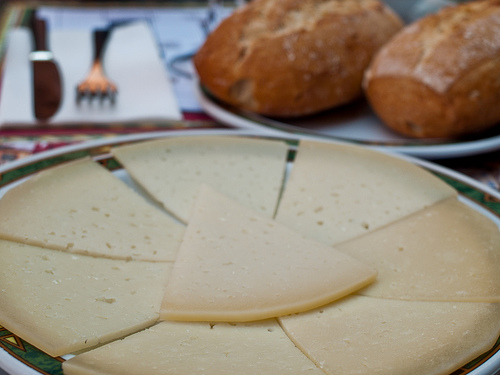 Manchego is the most popular cheese in Spain. This sheep’s cheese should be ordered semi-cured (medium) or curado (mature and is actually quite strong). Remember if you buy this yourself – you need to cut it into triangles like you see in the image. Any other way and it doesn’t taste as nice. 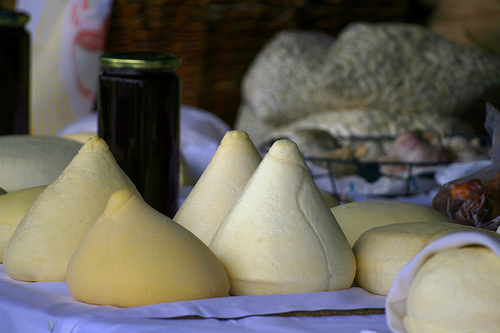 Tetilla is a cow’s milk cheese made in Galicia and shaped in the form of the breast – really! It’s quite a mild cheese and great to offset some of the stronger pungent ones. 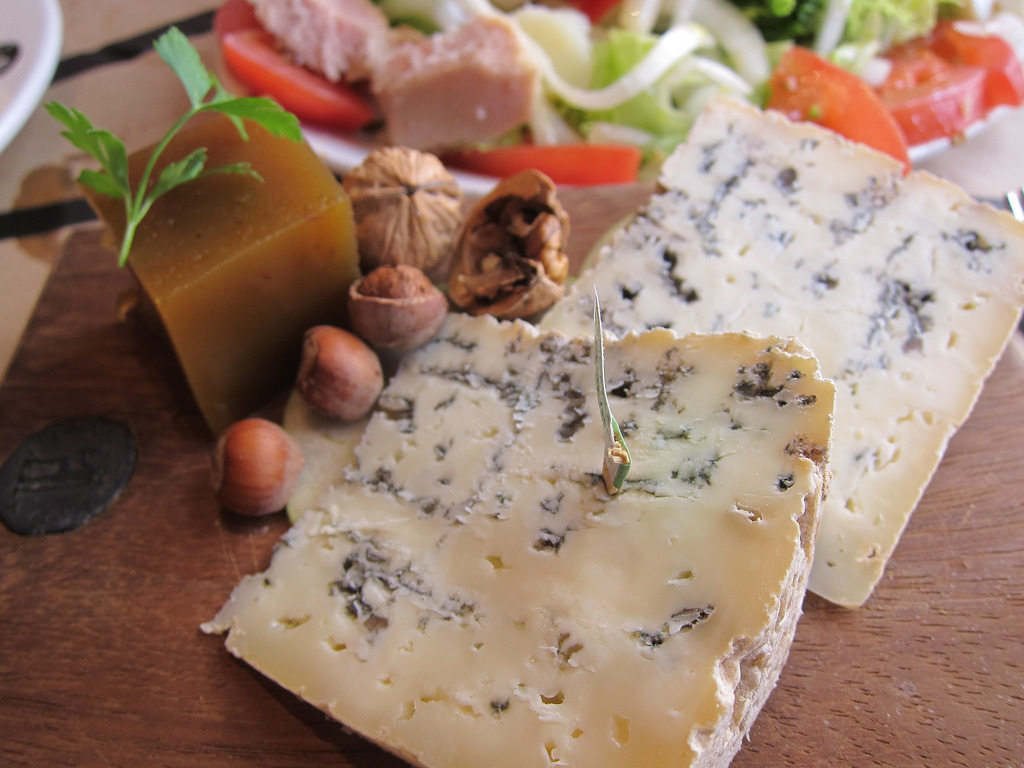 If you are as big a fan of blue cheese as we are you’ll love the Cantabrian and Asturian blues! photo credit: Cabrales, walnuts and quince via photopin (license)

Spain’s best known blue cheeses come from the Picos de Europa in Cantabria and Asturias. If you want hard-core blue cheese, you’ll want to ask for the Cabrales. If you’re not so sure, you are best starting with the Picon blue cheese which comes wrapped in leaves! Blue cheeses are always best purchased from a place where stock shifts quickly – if not, you’ll be eating something that taste’s like old socks, without knowing if that’s how it is supposed to taste or not! 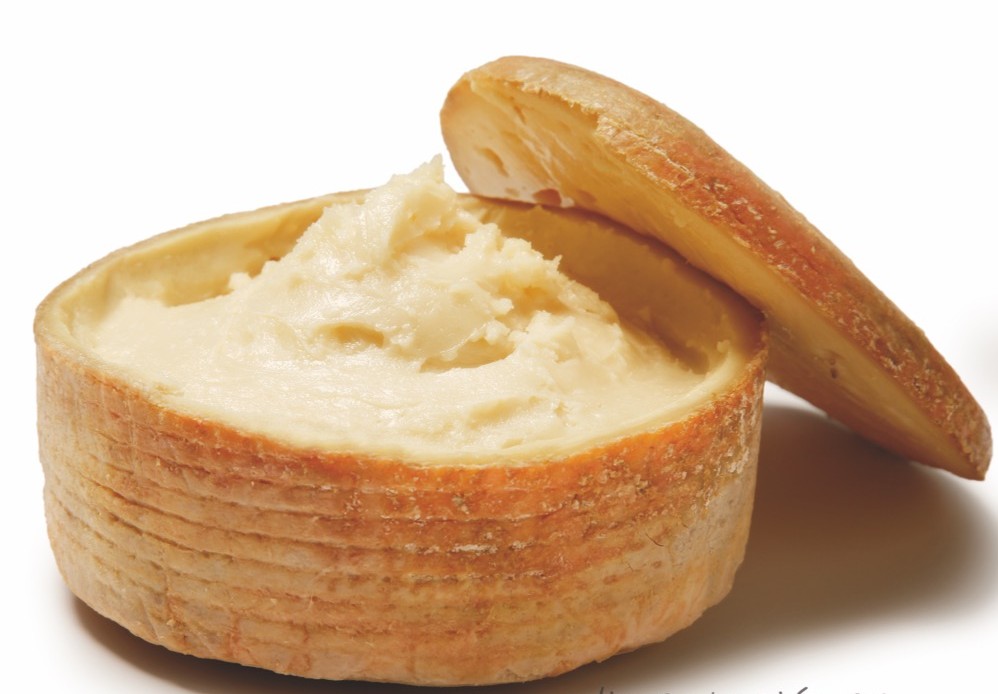 Perfect for picnics and casual meals – this ingenious Torta del Casar cheese is served in its skin and you scoop out the lovely creamy goodness with a spoon or knife! photo credit: Ministerio de Agricultura, Alimentación y Medio Ambiente

Torta del Casar cheese from Extremadura is another taste sensation entirely. It’s creamy and spreadable and served in its own skin – that’s why you always need to buy a full cheese rather than a chunk. Serve warm and just flip off the top which acts as a lid. This cheese is a meal in itself. Get some chunks of rustic bread and open a bottle of something tasty from Extremadura and while away a perfect hour tucking in. Serve at room temperature – if you are tasting it in a cooler climate – you might want to warm it up for literally a few seconds in a warm oven. 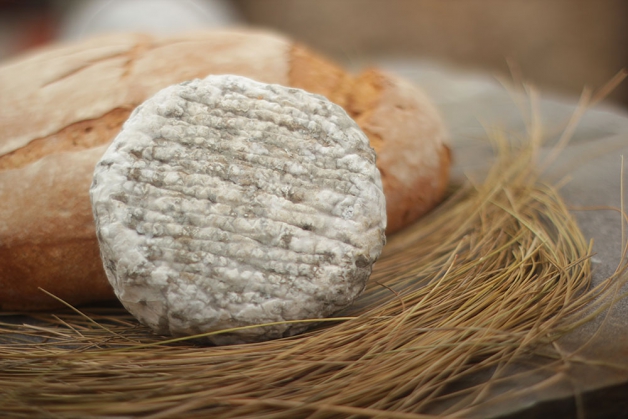 Spain is home to 27 DO’s so there is something local and delicious worth trying in every corner of the country. It may be a wonderful goat’s cheese or a smoked cheese. Here in Cantabria, a region known for its dairy herds, green pastures and caves, we are spoiled with some amazing cheeses. Along with the blue Picon cheese we mentioned earlier, we love the creamy queso de nata from La Cavada and the award-winning Jarradilla from the Pasiego Valley is really delicious too and you’ll find these in most bars, deli’s and supermarkets in the region. 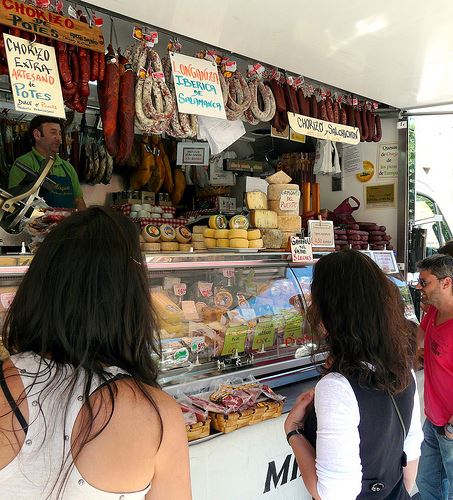 Where to Buy Cheese in Spain

Most supermarkets have an excellent range of Manchegos and whatever is the local specialty. You might even find a few international cheeses behind the glass but we recommend you keep it Spanish. If you want to see cheese at its best, you should check out some of the amazing food markets in Spain. That’s what we do when we want to come across new cheesemakers. The farmers markets in Lierganes and Potes and the main city foodmarket in Santander are fantastic places to see the massive wheels or drums of manchego, fresh quince paste and all our other favourites you’ve read about above. Cheese is one of the easiest things in the world to order also. The most popular cheese on sale throughout Spain is the Manchego semi-curado which is neither too mild or too dry. If you like mature hard cheeses, we recommend asking for “un trozo de un Manchego semi-curado y otro trozo de curado” which will get you a chunk of the medium and another of the mature Manchego. Ask about “quesos locales” – you’ll probably be given a taster before you decide what you want to purchase.

How to Order Cheese Out in Spain
Cheese is either served as an aperitif in Spain or as part of the first course for a larger meal. You will never find cheese as a dessert here – although if you ask nicely, some restaurants will of course hold your cheese order off until the end of the meal. To order cheese, you need to ask for a “racion de queso” or “tabla de quesos” which is a platter of cheese or a selection of cheeses. If you’re not a massive cheese fan, ask for a “media racion” or “media tabla” which is a half platter or half cheeseboard. The platter tends to be one or possibly two types of cheese that are simply presented whereas the ‘tabla’ often comes with some honey or dried nuts such as walnuts or some other garnish. The dry cheeses as you have seen above, are served in the classic triangles. You can pop a slice on a chunk of bread but you’ll find the Spanish enjoy the slice on its own and eat the bread separately. The bread will be used for the softer cheeses and you’ll also see short breadsticks called palitos or picos which are much more common in Spain than cream crackers.

Remember that in Spain, the earlier the hour, the blander the cheese. If for example you try a ham and cheese croissant for elevens in Spain, don’t expect more than a mild slice of something quite conventional. By lunchtime, you’ll find some decent cheeses on offer especially at weekends. It’s really at the evening meal (check mealtimes in Spain here) when the heavy armoury comes out. 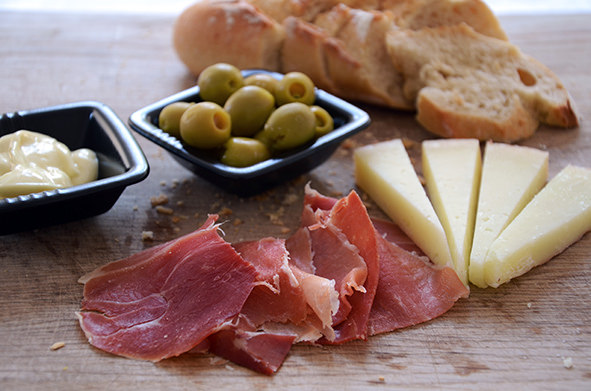 Enjoying Spanish Cheeses at Home
If you are staying in a self-catering apartment or planning a picnic in the park or by the beach, you mind want to try a few different combinations that you don’t see so frequently in the bars and restaurants. We love picking up a dozen figs and serving them with cheese when we are at home. Another combo that you don’t find in Spanish restaurants is the classic cheese and grapes. Pop to your local fruitstore where you’ll find some amazing Spanish grapes and you’ve got the making of a great cheeseboard. If you are in a market, pick up some almonds, olives and a slice or two of jamon serrano and it’s a classy meal! Another cheese combo we enjoy is a soft goats cheese served with Cantabrian anchovies and a decent jar of chargrilled red peppers from Navarra. Skewer a bit of each onto a toothpick or piece of bread and you’ll be so impressed with yourself!

What to Drink with Cheese in Spain
It might sound a bit obvious but you can’t beat a decent Rioja or Ribera with your cheese. But if you’d like to push the boat out even more, try an Asturian cider with the blue Picos cheeses, a crisp Rias Baixas with the Tetilla or a cold ‘fino’ sherry with the Torta del Casar cheese (although we have read about cava pairing and a Pale Ale pairing that sound quite good too!) For those too young or too sensible to drink alcohol, we’d recommend something like a tonic water, grape juice or alcohol-free beer especially when tasting some of the more pungent goat or blue cheeses. (Check out our handy guide to delicious alcohol-free drinks in Spain here.) 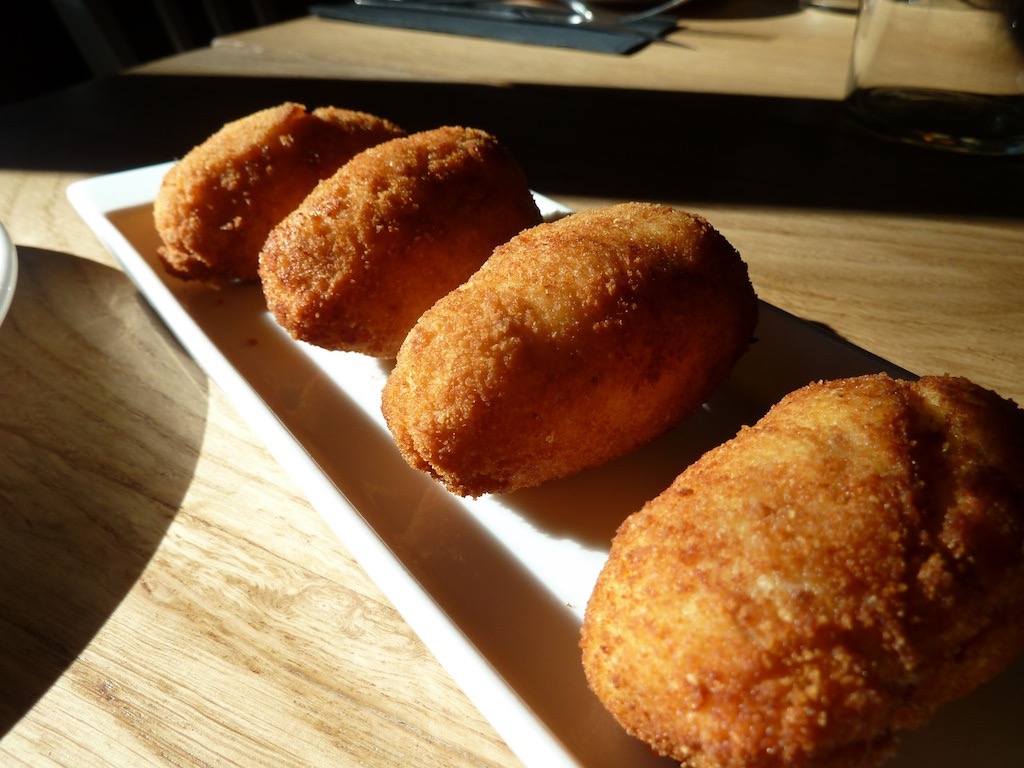 While these look unassuming, the Spanish croqueta is going upmarket and now features specialty cheeses in some delis and restaurants! photo credit: Croquetas via photopin (license)

Spanish Dishes and Recipes that Feature Cheese
We love the new croqueta deli stores that are cropping up in every city where you’ll find lots of cheese varieties including Idiazabal, Cabrales, Manchego etc. Many of these places not only sell the fresh croquetas which are perfect for taking home and preparing yourself but they now fry the croquetas to perfection on the premises so if you are peckish and see one of these types of stores near you, give them a go! Another oozy cheese favourite is the San Jacobo – a square of breaded ham with béchamel sauce and cheese that’s available from good butchers and delis. It doesn’t sound like much but they are tasty and comforting and perfect for preparing quickly back in the apartment. For more kid-friendly meal and snack ideas, see our food guide for families.

If you like your blue cheese, you’ll want to know that in the Picos de Europa, you can ask for a chunk of the local blue cheese to be served on your steak. Throughout all of Asturias, meats often come accompanied with a blue cheese sauce on the side.

And when we said earlier that cheese is never served as a dessert – technically we weren’t 100% accurate. Cheesecake in Spain is nearly always baked cheesecake and is well worth a try! You’ll also find ‘quesada’ in Cantabria – a popular sweet dessert which is hard to describe but well worth a taste. And in Asturias, we love ‘requeson’ which is a light fresh cheese mousse-like delight! 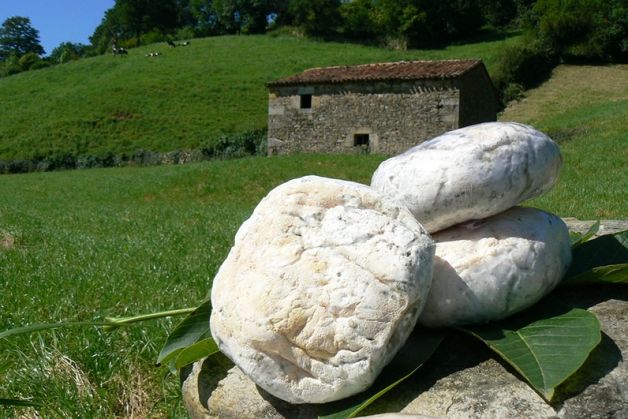 Visiting cheesemakers usually means taking in scenes like this one amongst the green pastures of Cantabria. photo credit: QuesosLaJarradilla.com

Like what you’ve read but think you could benefit from some one-on-one tutoring? Would you like us to book you on a food tour or prepare a bespoke cheese tasting session for you in Spain? How about a visit to an artisan cheesemaker or two? Or perhaps a tour of a food market or two with an emphasis on the local and national cheeses? Just let us know that cheese is your thing and we can handle the rest in conjunction with your custom Totally Spain tour!