We’ve just been contacted by a very happy honeymoon couple who wanted to thank us at TotallySpain.com and the Parador of Baiona for a wonderful experience. Michael told us – in his own words – how he found love, how he found us and how much he and his wife Niamh loved the paradores. 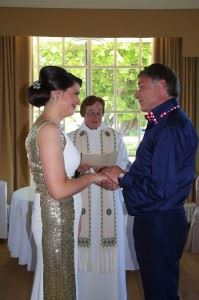 Michael & Niamh on the big day

“Niamh and I met in October 2006 in a wee small local pub called the Bridge bar in Ramelton, Co. Donegal about 4 months after I had separated from my wife and about 18 months after Niamh separated from her husband. We both lived locally and met up regularly but really took our time building a relationship as we both had been badly burned. After about six months, we knew we wanted to stay together but we then had to wait until our divorces were sorted out. In the meantime we had 3 yes 3 babies. Two little girls and the finally a little boy. My divorce was finalised on the 17 October 2012. And the following week I flew out to my parents in Marbella and bought an engagement ring. And presented it to Niamh on the 24th November.

We then started to plan a small wedding. Shortly after Christmas when we finally fixed a date and venue we started thinking of a honeymoon. We went through loads of different ideas and locations but in the end decided not to travel too far. We remembered having flown over northwest Spain on a return from the Canaries and thought the landscape looked lovely so we started looking at flights to Santiago from the 11 – 18th of June. Then we looked at hotels on the beach for that area and when the Parador in Baiona popped up Niamh loved it. We discovered that if you book several stopovers you get a better deal.

Just by chance I clicked on TotallySpain.com and saw they get special rates and also handle car rental. We decided to call them and explain our requirements. Ken outlined a few ideas that we liked and after that it was plain sailing. Having Totally Spain do all the legwork saved a lot of time and phone calls and emails and we really liked the quick response and attention to detail.

The honeymoon was perfect. We stayed in the Parador in Santiago for one night and also ate in the bistro – which was really good. The following day we drove to the Parador of Baiona and were blown away by the beauty of the place. We loved it there and after the second night we were to move to another hotel but we rang Totally Spain and they helped us change our bookings to stay on in Baiona for two more nights. The parador presented us with free champagne and homemade chocolates. My new wife was thrilled. The weather was great and the little tapas bars and waterfront area were really nice as were the people of that region.

Dealing with Totally Spain was a pleasure. I have travelled all over the world in my 50 years and never before have I felt so comfortable dealing with an agent or so pleased with the total package.”

See the Paradores where Michael & Niamh stayed in Santiago, Baiona and Cambados. 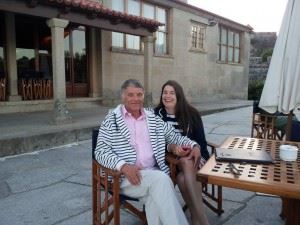 The happy couple at the Yacht Club in Baiona, Galicia 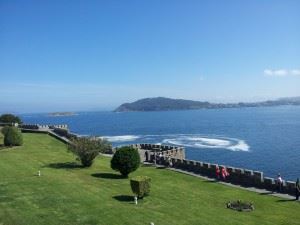 If you are thinking about a romantic getaway or a honeymoon in Spain, look at our Paradores in Spain page.