Did you know that Joe Strummer, former frontman of The Clash who passed away in 2002, was honoured in the Andalusian city of Granada, Spain in May 2013 with his own small square – the Placeta Joe Strummer? This followed a campaign by locals on Facebook which reached officials at City Hall some of whom turned out to be fans.

Strummer went to live in the city of Granada in 1984 when his group the Clash were going through a crisis. His ties to the city though went back before the formation of the Clash to his former girlfriend Paloma Romero, with whom he shared a London squat, and who came from Granada.

Strummer became very interested in Spanish history, the Civil War and the works of the Granadino poet Federico Garcia Lorca who was shot by a right wing death squad during the war. This interest inspired his song Spanish Bombs written in 1979 and which featured on the London Calling album.

For those keen to visit the site, it can be easily found in the shadows of the Alhambra in the Realejo district of Granada where the Cuesta de Escoriaza meets the Calle Vistillas de Los Angeles. 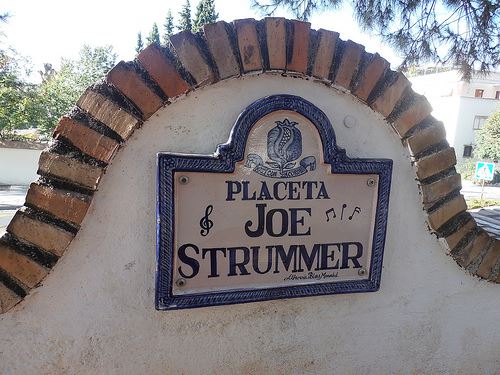 Fans should also check out the film by Nick Hall about Joe’s time in Spain called I Need a Dodge.

At Totally Spain it’s curious to us what motivates people to visit Spain and we understand that there can be many reasons, some of which are obscure.  If you would like to arrange a unique trip to Spain and would like to deal with an agency which will strive to understand your exact needs and motivations for coming to Spain, then please contact us.