As a part-time travel writer, Angela Clarence has journeyed far and wide for glossy magazines and broadsheets. She spent 13 years working for Nobel Prize Winning Author Harold Pinter. She divides her time between southern Spain and southern England editing holistic non-fiction and writing a historical novel. In between chapters, Angela nipped over to Jerez for us to try some sherry, see the horses and watch some flamenco.

It’s a fascinating year round destination. Bodegas produce sherry; Flamenco throbs in bars; Andalusian Horses are bred and trained; not to mention the feast of winding streets lined with architectural gems.

The venenciador is the name of the person who serves the sherry from a cup with a long handle. You’ll often see this at Spanish weddings and special occasions. Photo credit: Neil Buchan Grant

I’m just back from a few days break in Jerez. I was invited to a classical concert performed by members of the Soloists of London as part of their annual summer tour in Spain. It was held in the renowned Tio Pepe/Gonzalez Byass Bodega which is one of the largest and best known of the many Jerez sherry producers offering daily tours. But if you are able to attend one of their ‘special’ evening events – viewing the cellars and gardens at night is a truly romantic experience. My evening included a tour of the Bodega, a sherry tasting with tapas, as well as a varied programme of classical music. 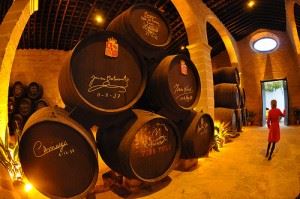 The sense of tradition at the Tio Pepe bodega is ever present. Photo credit: amycgx via photopin cc

Exploring the Sherry Wineries in Jerez

A Bodega tour here is not only fun but fosters an appreciation of this fortified wine in all its forms. Wine making was originally introduced to the area by the Carthaginians; continued by the Romans; followed by the Moors who added their knowledge of distillation but mainly used the grapes dried as food for their soldiers; and finally the Spanish when they re-conquered Andalusia in the thirteenth century. When Francis Drake conquered Cadiz in 1587 he also bagged the 2,900 barrels of sherry or ‘sack’ sitting on the dockside and stimulated the long British love affair with this intriguing, complex drink.

I thought it would be good to also visit a second smaller bodega and went to Bodegas Tradicion that produces aged-sherries for a niche market. The personalised tour includes a viewing of its small but celebrated exhibition of Spanish art. At 20€ per person it is a fraction more expensive than most, but definitely worth it. Housed in one of the oldest family-owned winery buildings in Jerez and restored in 1998 by the descendants of the original family, it follows the ancient tradition of ageing and maturing sherry by hand. 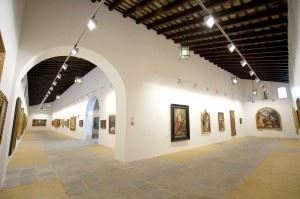 The unexpected but amazing gallery at Bodega Tradicion in Jerez that includes paintings by Velasquez, Zurbaran and Goya

The fragrant aroma of the wine cellars is distinctive, the richly sweet smell of ageing sherries, the tang of the American oak barrels combining with just a hint of damp oozing from the old walls. The west facing windows are designed to allow the Atlantic sea breezes through the high ceilinged rooms to cool the barrels, although in high summer the stone floors and barrels are sprinkled with water to help regulate their temperature. The barrels gradually become saturated as the sherry matures, at which point the golden liquid is moved up into another barrel and then another and another. And the hand siphoning process ensures that the sediment at the bottom of the barrel doesn’t interfere with the developing flavor. The bottling is also done by hand and even the wax seals are hand dipped.

The art gallery offers a beautifully lit, jewel-like collection, hung chronologically from the fourteenth to nineteenth centuries, tracing the development of Spanish painting. A third of the family’s art collection is on view at any one time and includes paintings by Goya, Zurbaran and Velazquez (occasionally lent out to international exhibitions). The enthusiasm of our guide, who was charming, attentive and tremendously knowledgeable, also gave us space to appreciate the works, but was on hand to explain some of the unique details within the works. The viewing felt like a microcosmic tour of the Prado!

I planned to sip just one of the four sherries on offer as we settled down for our tasting (I’m not usually a big fan of sherry!). However, after savouring the exquisite, aromatic, creamy, heady yet light, Pedro Jimenez I was hooked and sampled them all, as well as the two fine brandies! Imbued with happy warmth, deliciousness still coating my tongue, I even bought a highly-priced bottle of my favourite. These high quality wines are produced for the luxury market with none aged less than twenty years and some more than forty-five years. Their best brandy is presented in a hand-blown crystal decanter and costs over 200€! But do not let this put you off! You are not obliged to purchase and will experience the very best of the best, as well as having the opportunity to enjoy great art. 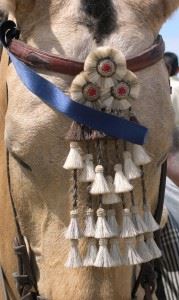 Many consider Jerez to be the cradle of Flamenco, an art form lauded by UNESCO as a ‘Masterpiece of the Oral and Intangible Heritage of Humanity’ in 2010!  And there can be no doubt that this passionate explosion of song, dance and musicianship cannot fail to stir the blood. The beat of hand on drum box; the lightning pluck of intricate guitar chords; the passionate cries of the singers; the pounding of stamping feet; the flicking of fingers; and twisting of sinuous frames over tautly stretched costumes is irresistible. Whether you attend a staged show for visitors, or happen upon aficionados performing in small bars around the city such as Tabanco El Pasaje, this Spanish style of dancing is a joy to behold and should not be missed in Jerez. 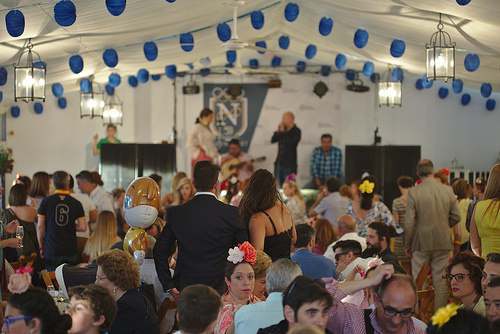 Enjoying the atmosphere of the Horse Fair in Jerez! photo credit: Lanzen In the txosna via photopin (license)

The qualities of Andalusian, or Pura Raza Espanola horses are renowned for their beauty, intelligence and huge hearts. The mounts of kings, conquistadors and equestrian champions, they are supremely adaptable and extremely comfortable to ride.  Once you have owned one, they say no other horse can satisfy. Their history is filled with myth, drama and controversy, much of it linked to the Carthusian monks who first bred them in the 14th century at the Monastery of La Cartuja on the outskirts of the city. I went over to the original ranch which is still in existence at the Yeguada de la Cartuja Stud Farm. Every Saturday morning you can visit the stallions in their boxes; walk among the mares with their foals; and watch a dynamic display of wild young colts and beautifully trained mares and stallions in the covered riding school, followed by a glass of sherry and possibility of purchasing souvenirs at their elegant gift shop. 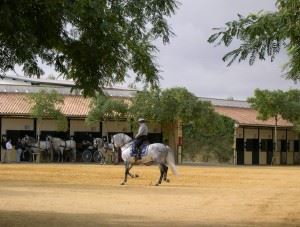 Meanwhile at the Real Escuela Andaluza del Arte Ecuestre in Jerez city centre, a spectacular show features horses with riders dressed in 18th century costume performing to stirring music. Their astonishing feats of delicate footwork, high stepping, hopping, skipping, jumping, and leaping in the air like Russian ballet dancers appear to the uninitiated to be unnecessarily contrived. I was told, however, that the subtle combinations executed by horse and rider are integral to their work in the fields both herding cattle and outwitting bulls; as well as for drawing carriages without falter; and once upon a time, for facing down opponents on the battlefield! The show lasts an hour and a half and takes place several times a week. There is an option to go behind the scenes and watch the horses being schooled.

And after you have seen a horse show, flamenco and visited a bodega or two – just enjoy the city itself. Explore the narrow streets of the Islamic part of the city and weave your way past the elegant squares. Jerez is full of with interesting buildings that should not be missed, including the Archeological Museum; the Moorish Alcázar; the Monastery of the Cartuja; the Cathedral and many of the smaller churches. 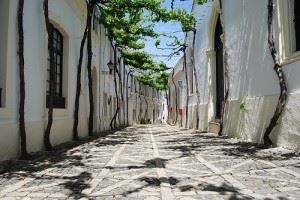 One of the beautiful treelined streets in Jerez. Photo credit: van.brussel via photopin cc

Jerez is beautiful all year round. Whether you spend a couple of days or a couple of weeks, this Andalusian city cannot disappoint. And in case you need another reason to visit, here are some annual fiestas in Jerez: 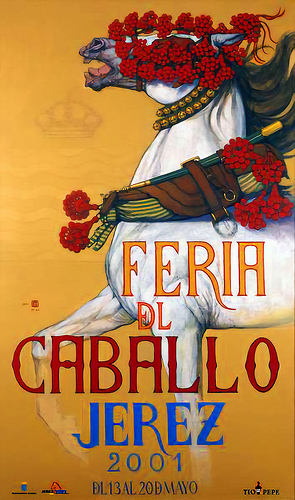 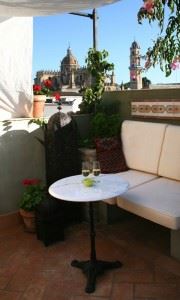 Thanks Angela! Good luck with the next few chapters!

How to get to Jerez

It’s easy to access with an international airport; a mainline train station; and express bus services, Jerez is also just 92km from Seville and 39km from Cadiz. If you’d like to enjoy what Angela experienced including the amazing Jerez wineries, why not let Totally Spain organise your hotel and tickets to the equestrian shows, bodegas and flamenco performances in Jerez? See the TotallySpain.com Package for Jerez which also includes suggested day-trips to Ronda, Seville, Puerto de Santa Maria, Cadiz & Cordoba.

And if you’re looking to visit more wineries in Spain, check out our Best Bodegas in Spain post plus our detailed guides to other wine regions in Spain including La Rioja Alavesa, La Rioja, Ribera del Duero, Rias Baixas and Cantabria.