It’s sailing trials time in Santander. With one year to go before the ISAF World Sailing Championships, this year’s Ciudad de Santander Trophy is more important than ever before. We asked Santander resident & writer Pamela Cahill to take her notebook and camera down to the bay. Take it away Pamela! 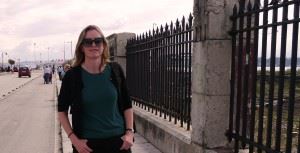 I’ve been looking forward to the start of the trials for a number of weeks and it’s been everything I expected and more. The skill and enthusiasm of the competitors, the beauty of the boats and the thrill of the race were a pleasure to witness – and all that against the nicest backdrop I can imagine – the bay of Santander. All 53 countries participating this year are here to check out conditions and prepare for the world event in 2014. Spain had the largest number of entries (39) followed by Great Britain (18) and Sweden (15).

I went along to the launch party on Sunday evening to see Olympic champions mixing with volunteers, local dignitaries and residents. The two rock bands, the mojito and beer stand and two bouncing castles kept just about everybody happy. 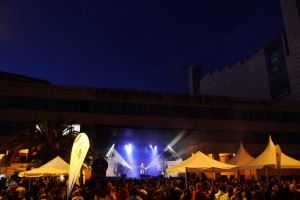 The launch party for the Ciudad de Santander Trophy 2013

Next morning – I took my freshly printed press pass, a warm layer of clothing (just in case) and my packed lunch, and I joined the rest of the press pack on the pier in front of the Spanish Centre for Excellence in Sailing (CEAR). Out on the water – I was struck by how beautiful Santander bay looked. As the competition warmed up and prepared to race, we photographed the line-outs in front of the landmarks in the bay – the lighthouse, the Sardinero beaches, the Magdalena palace, and the protagonist of the event – the open sea. 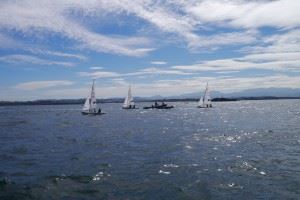 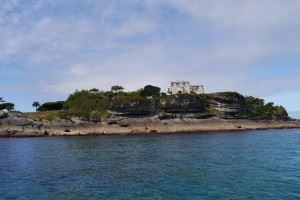 We passed by the Magdalena Palace where Spanish royalty holidayed. Today it used by the International University (UIMP) and for civil weddings

The races that day were in the Alfa and Charlie sections of the bay which you can see in a map here. We were out to observe two classes competing – the 470s and the Finns. The double-handed 470 (named after the boat’s length) was designed in 1963 and has been an Olympic sailing class since the 1976 Games (1988 for women’s event). The Finn is a men’s single-handed classic – and has been competing in every Olympics since Helsinki 1952. With just a 6 boats competing in the Finn class, we focused mostly on the 470s class which had 18 boats competing in the women’s class and 32 in the men’s. 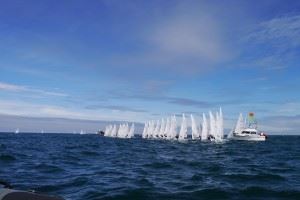 The 470s line up in Santander bay 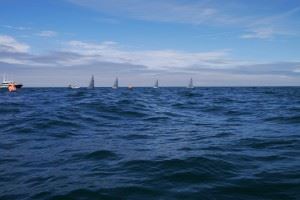 The single-handed Finns were competing by the Somo coastline

Enjoying the speed of the motorboat, we zipped from buoy to buoy, clicking on our cameras as we marvelled at the twists and turns– groaning when we thought a boat was too close to another. We felt the wind changes, heard the competitors’ gripes at the recalls, and clung on the side of the boat as we watched the others dangle from their harnesses. 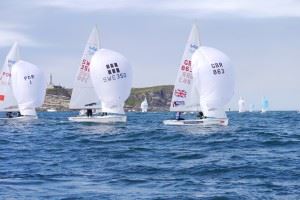 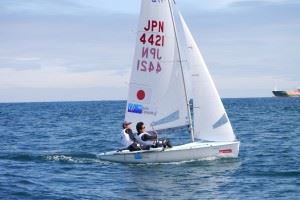 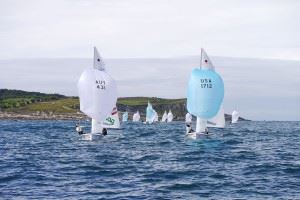 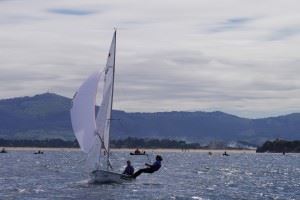 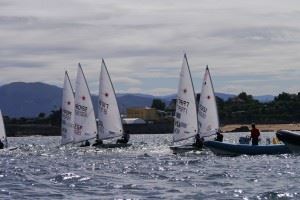 Not competing but out training by the Sardinero beaches in Santander

We were out on the water for five hours but it felt much shorter. Back on dry land – I made my way home to upload my photos and check the results to see how the various teams had performed. While each of us on the press boat had our own national team or personal favourites – our collective support on board went to Angola – one of the 7 ‘emerging nations’. This programme began at the last ISAF championships held in Perth in 2011 and aims to bring emerging nation sailors back to compete next year and on to the Olympics in Rio 2016. [Unfortunately, as I write they are at the bottom of the results board but the experience is invaluable for them. Come on Clube Naval Luanda!] 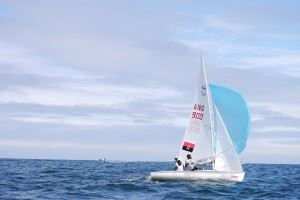 Having seen the race, I wanted to meet some of the competitors and two days later I went to Gamazo where the crews keep their boats and prepare and disembark for races. In addition to the 470s, I got to see the Nacra-17 (catamarans) and the RS-X class (or windsurfers as I might have called them) preparing to compete. I was curious to see how independent these competitors are – even the windsurfers go out with backpacks on – containing whatever supplies they need for the day they spend in the water. 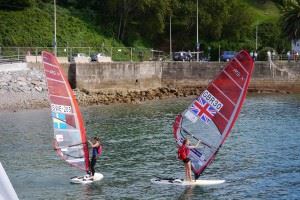 I asked the competitors how they were enjoying Santander. It didn’t take me long to realise these sportspeople don’t get a lot of time to relax or sightsee. Most are staying in self-catering apartments in the city or have rented houses near the capital. Their daily routine is to breakfast at home, make a packed lunch to take out on the water, go to Gamazo and set up for the race, compete and then go back to their accommodation after the race to shower, recover, eat and rest before the next day. Most of the competitors were in Santander for the first time – they liked it – but weren’t getting any free time to see the city or the surroundings. 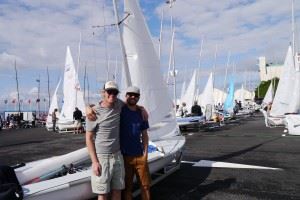 Sweden’s Fredrik Bergstrom & Anton Dahlberg. Anton came to the city a few days before the competition to surf at nearby Liencres beach and enjoy some tapas 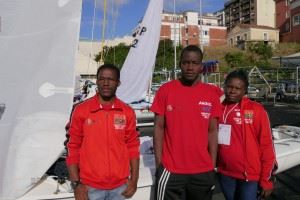 Angola’s 470 team comprising of Matias Montinho, Paixão Afonso with Engracia Paulo are keen to return in 2014 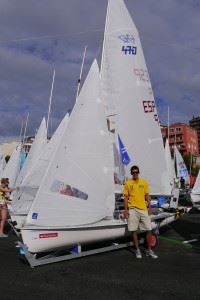 Juan Curvelo Cabrera from La Palma in the Canary Islands has been to Santander on a few occasions. He is staying together with all the Spanish competitors at a residential sports complex in the city 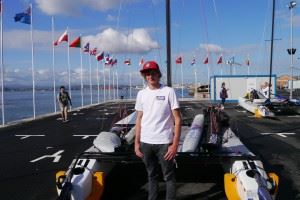 GB’s Rupert White who competes alongside Nicola Boniface in the Nacra 17 class. Four of the 10 catamarans in this class are from Great Britain. Rupert is off to La Rochelle in October 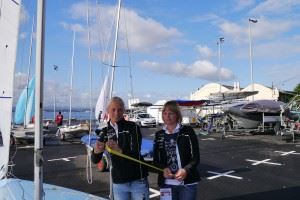 Marjaliisa Umb & Elise Umb with their 470 from Estonia (EST 20). They came third on the first day of racing but fell back to 6th later in the week 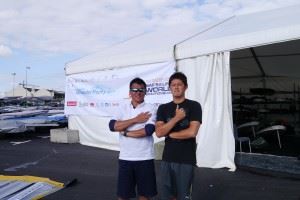 Soon it was time to watch the 470s and RS-Xs take to the water. Within 20 minutes the Gamazo area was looking very empty and the bay was better than ever with dozens of sails fading into the horizon. 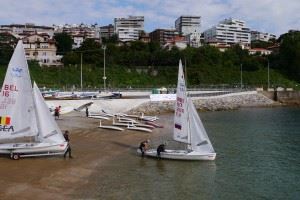 Leaving Gamazo for the open sea in the bay of Santander 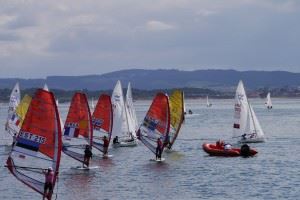 Heading off to compete – FRA 4’s Charline Picon (pictured second from left) was to win the women’s competition. NED 8 with Dorian van Rijsselberghe won the mens. 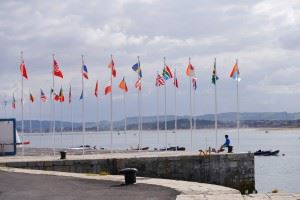 The empty stage at Gamazo – just the flags left for company

I’ll be checking the sailing results over the coming year and keeping an eye out for the sailors and surfers above. I walked home by the area where the Championships will be held next year – still a building site – but a lot can happen in a year!

Thanks Pamela! If you are travelling to the ISAF Sailing World Championships, check out our free city guide to Santander – perfect for friends and family supporting the competitors and the wider sailing community.