Vitoria is a great destination for a parador weekend break and recently we did just that. We stayed at the Parador at Argomaniz in a tiny village just 14km from the city. It’s a wonderful 17th century renaissance palace  – where Napolean lay his head before the assault on Vitoria. It’s always been beautiful but following a two-year renovation project, we heard it was looking better than ever and we were keen to see the new improvements for ourselves.

We arrived on the Friday and beamed when we saw how lovely our suite was. One of the reasons for the refurbishment was to improve the distribution and size of the bedrooms. Our suite (with an extremely large bathroom) was beautiful and we had super-fast wi-fi access. We also noticed that new lifts had been installed throughout the building; greatly improving access. And the downstairs cafe area was looking wonderful. We loved the restoration work to the facade  – especially beautiful from the garden of the Parador. We decided to have a well-deserved drink at the outdoor seated-area to soak up the views of the golden facade against the Alavese plains. 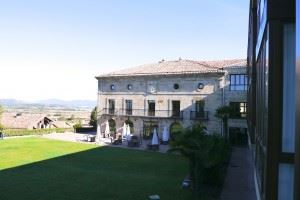 The Parador at Argomaniz – Napoleon’s choice and ours too!

We had an evening meal at the Parador restaurant which looks up at the most stunning wooden ceiling. We chose a salad with goats cheese and cured beef, then squid and the all time Basque favourite – bacalao al pil-pil – all great; plus a handsome local wine recommended by our waiter. 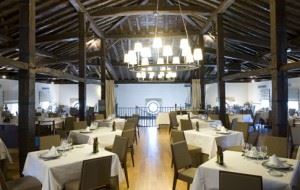 The stunning wooden ceiling of what is now used as the dining room at the Parador. Pic credit Paradores.es

On Saturday morning after our delicious Parador breakfast (personal favourites from our table were the muesli, tortilla, and Jamon Serrano) we went into Vitoria to do some shopping and sightseeing. Vitoria-Gasteiz, as it’s officially known, is the capital of the province of Alava and of the Basque Country region. It’s a lovely mix of old (two cathedrals, the old quartier, La Florida Park, Plaza de España) and new (gleaming tramway, funky architecture) and was European Green Capital in 2012 and Gastronomy Capital of Spain in 2014. [See the video below to get a sense of the often daring and always eclectic architecture and how forward thinking the city is.] It was a wonderful sunny day so we spent most of it table-hopping from park cafes to tree-lined shopping streets and on to wonderful squares. 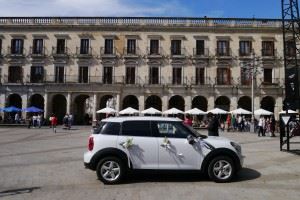 We saw three weddings in one day in Vitoria – here is a small bridal car in the stunning Plaza de España, Vitoria 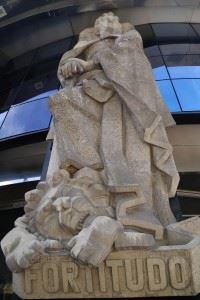 Fortitudo meaning Strength says the inscription at Caja Vital in the centre of Vitoria. There was a partner sculpture for Temperantia or Temperance 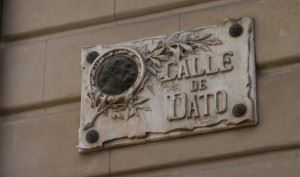 The attention to detail is everywhere – from park benches, to sculpture and here on a street sign 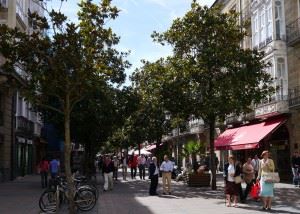 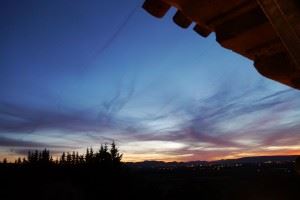 A dramatic sunset on the Saturday evening at the Parador

Saturday evening and the drill was now well rehearsed – a drink outside on the terrace at the Parador. This time we had a small wedding party for company that gave us much to look at. We were even more pleasantly distracted by a wonderful sunset that we enjoyed as long as possible. We went inside for dinner – enjoying the gorgeous wooden beamed ceiling again – this time we ordered the baked aubergine with poached egg starter (wonderful) and some chargrilled veg (amazing) and an oxtail stew each – which was hands-down the winning dish of the weekend. We resisted the urge to have a nightcap from the Gin & Tonic Bar (next time we won’t show such resolve!) and retired for the night.

Somehow we found room on Sunday morning for some healthy and delicious muesli and fruit and plenty tortilla and more Jamon – plus some delicious homemade cakes and great coffee. After a last walk about the grounds – they have a nice organic vegetable patch here – we packed, shook hands with the brilliant front of house staff (the staff here are amazing!) and headed for the hills to do some more exploring.

We had many choices for day-trips from here. We could have driven over to Laguardia (56km) or Haro (58km) and visited some wineries (see our post on this). But we decided to stay local and visit two nearby villages that we like and regularly recommend to our clients. Both villages are on the Camino de Santiago, with Argomaniz en-route and by foot are just 17km apart so it’s a handy hike (25 km by car). The countryside and the scenery of fields and fields of sunflowers and rows of neatly planted vegetables is inspiring (even by car!) 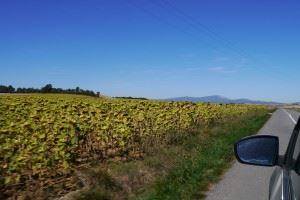 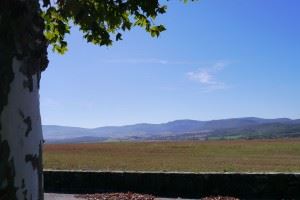 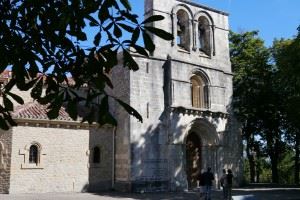 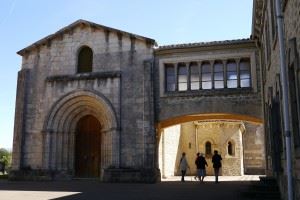 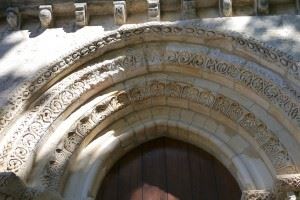 Our first stop was the Sanctuary of Our Lady of Estibaliz (just 10km from the Parador) – she is the patron of Alava and the site has been listed since 1931. Dating back to the 11th century, it’s a romanesque treasure sheltered by a beautiful wood. We circled the basilica a few times and went inside to see the extremely austere decoration inside. It was pretty popular that morning with cyclists. And family groups were arriving with picnics as we were leaving. There is a lovely picnic and children’s play area at the edge of the wood.

Our second stop was Salvatierra (19km from the parador). Salvatierra (or Agurain in Basque) was founded by Castilian King Alfonso X in 1256. It was one of a number of strongholds or freetowns he established that were bordering Navarre which he wanted to use to foster trade links with Castille. As you approach the town you might be struck by the modern industrial units on the outskirts – this is still a town with a strong sense of trade and it’s what gives the area it’s commercial viability and a buzz in the streets. The town layout is unchanged since the 13th century. It is a walled town (only residents can drive their cars inside) that has a fortified church at each end. In 1564 the town was set on fire in response to a plague – only the walls and churches survived this sad episode. However, many of the beautiful houses date from this renaissance period. We walked the town, explored the two churches, enjoyed the views of the plains and ate some wonderful nibbles including top class mussels in the main square. 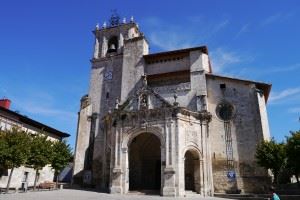 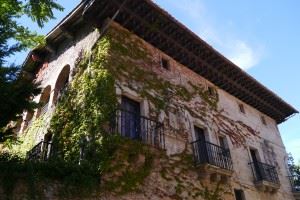 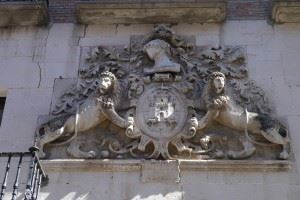 Another coat of arms on the Calle Mayor, Salvatierra 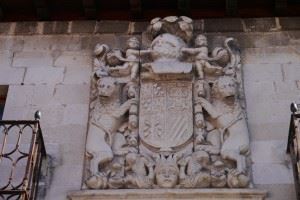 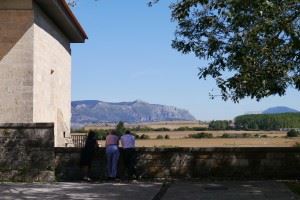 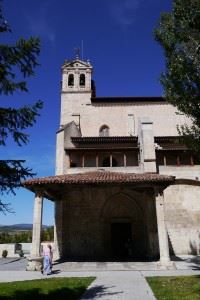 In the late afternoon, it was time to return to Cantabria. Mid-route we decided we’d stop off at the Parador de Limpias (117km from the Parador de Argomaniz) for a coffee and a leg stretch – although that quickly turned into a snack of chocolate and churros. The grounds are immense and beautiful and the snack was well served and very well received. A lovely way to end a great weekend.

Did we mention that we took the children? They shared our suite (sleeping on a pullout sofa bed) and ate from a well-thought out, reasonably priced and totally tasty children’s menu. There was an outdoor children’s play area near the organic garden and in the villages they found plenty to do and see and were quickly adopted by local kids. And the churros were a hit too!

We waited a day or two before opening this box of chocolates at home. We always like to pick up something when away… 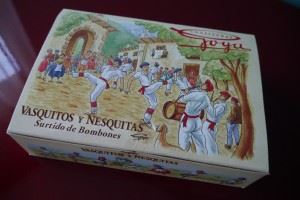 Vasquitos and Nesquitas – a popular selection box by Goya Confectioners (established 1886). We picked them up at their elegant shop on Calle de Dato, Vitoria

If you liked what we saw, why not look at our Churches and Sanctuaries of the Basque Country Tour and Vitoria and the Rioja Wine Region Tour.