We blog a lot about food. And museums. And places to travel to. But there’s another activity that most of us do when on holidays  – that we haven’t touched on recently and that’s shopping. Love it or loathe it – if you’re looking to buy a quality keepsake in Spain – Spanish shoes are a pretty safe bet. Here’s what we’ve been highlighting to our clients ever since Totally Spain set up as a Spain-based travel specialist back in the year 2000.

Should Spanish Shoes be that One Thing You Bring Back from Spain?

1 Where to Buy the Best Shoes in Spain?

Many of the Spanish shoe producers are located in the east coast in Alicante and the Balearic Islands. And that’s where you’ll find a number of outlet stores, for example at Elche you’ll see some of the exclusive brands. But wherever you are, you’ll be able to pick up a pair of ‘made in Spain’s whether that’s at an outdoor market or an exclusive store. And if you are flying into Madrid or Barcelona airports, some of the terminals even have a pretty good range of footwear. Curious about the type of shoes should you be trying on in Spain? Read on! 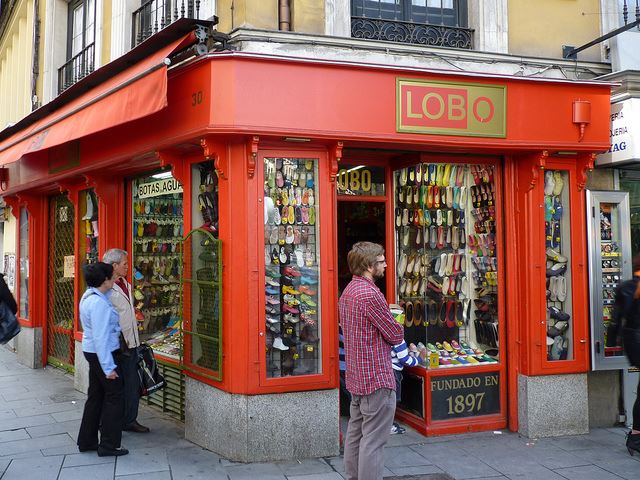 Shoe shopping in Spain – you’ll find some great independent shops like this one in Madrid that was founded in 1897. Photo credit: Melissa Ris via photopin cc

2 The Perfect Spanish Shoes For Fun in the Sun

One of the most iconic shoe designs is the espadrille which is called alpargata or espardenya in Spain. Great for hot days. Castaner is one of the more popular brands and the history of the company is a colourful as its range of shoes. The first Castaner workshop dates back to 1776 – although the present day company was only founded in 1927. During the Spanish Civil War, the company was nationalised because soldiers were sent to the front wearing espadrilles. When the Castaner family met Yves San Laurent in the 1960s in Paris, the first wedge espadrille was commissioned. Since then, Grace Kelly, Jacqueline Kennedy and Salvador Dali (not the wedge heel – we think!) have worn this shoe. 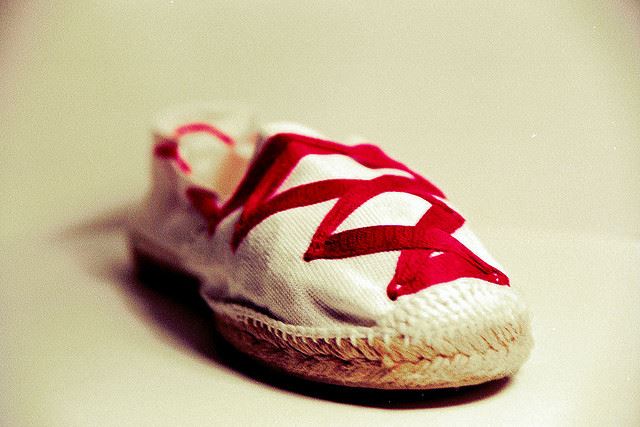 The humble espadrille – here in the Basque traditional colours – is a wonderful shoe in the warm and dry months. Photo credit: caravinagre via photopin cc 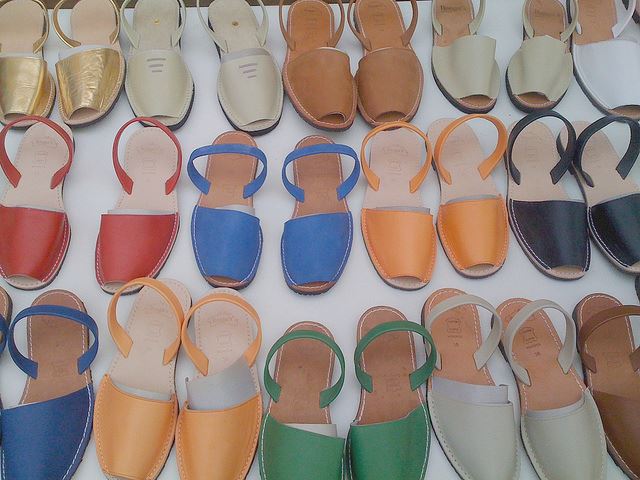 A colourful selection of menorquinas or abarcas that are worn by men, women and children during the summer months. Photo credit: xenxun via photopin cc

Alongside the espadrille is the other summer classic – the menorquina sandal also known as the avarca/abarca sandal. This century old design that was originally used by fishermen is today hugely popular with men, women and children. See how artisan these two sandals are in the videos below. First the espadrilles – watch how the craftsman creates the sole – it’s fascinating…

and the making of the abarcas is equally impressive. Such as classic simple design…

Another classic design is the flamenco heel. These shoes are a big hit with girls learning flamenco. You can pick these up in every city in Spain at any of the dance shops and in cities such as Seville you’ll find the basic designer sale in the markets and souvenir shops. At a professional level, the shoes heels are are designed to withstand a lot of foot stamping and the heel will be made from rosewood. The top professional brands include Begona Cervera and Senovilla Shoes. You can see how these iconic shoes are made below… 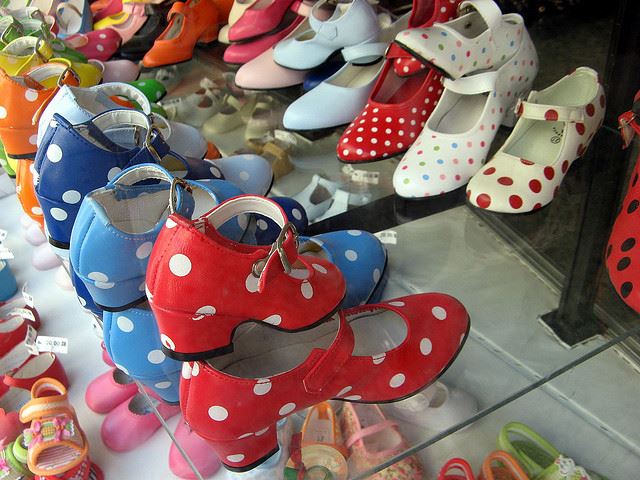 The flamenco heeled shoe comes in many sizes and colours. Expect to see them worn with elaborate dresses at the ferias in Andalusia and in the dance bags of little girls all over Spain. Photo credit: Freddie H. via photopin cc

Watch how the dancer’s shoe is put together…

If you are looking for international designs with Spanish execution, you have plenty to choose from. Check out the Japanese/Brasilian designer Chie Mihara who makes her shoes in Elda (Alicante) where she also has an outlet store. She’s got quite a cult following.

If you are looking to namedrop when wearing your new Spanish shoes, you should probably look at Stuart Weitzman‘s work. He lives and works in the US but makes his shoes here in Spain. His 2014 fashion shoot was photographed by Mario Testino and the model was Kate Moss. His clients include Michelle Obama and well, almost everybody who’s walked down a red carpet.

Another international company, this time British, that is hugely proud of its production team in Spain is the LK Bennett brand. Britain’s favourite royal, Kate Middleton, is a fan. If you’d like hear why this company chose Spain, watch this video below…

The country’s most acclaimed footwear designer is Manolo Blahnik. You can probably get more of his range in London and NY than you can in Spain, but he does have a store on Calle Serrano in Madrid and in the Mandarin Oriental in Barcelona.

Pretty high up on the name-dropping scale of things is the Pura Lopez brand based in Elche (Alicante). As with so many of these designers, Pura comes from a shoe making dynasty. Her shoes are seen on the feet of most Spanish models and Spanish royalty too. Perfect for special occasions. Her stores are in Rome and Paris but you’ll find her footwear in Spain in independent retailers and of course, online.

Others brands that eschew artisan are Pedro Garcia, Lotusse, Rebeca Sanver and Pons Quintana – we like their video on the weaving or braiding of shoes.

6 Everyday Footwear Brands that are Made in Spain
One of our favourite everyday brands is Vialis. It’s a company that makes handmade shoes in Barcelona and has stores in Barcelona and Madrid and also sells from a handful of independent shoe and clothes shops across the country. You can see a great video of how they make their shoes here…

Another popular brand that is extremely easy to pick up anywhere in the country is Panama Jack – a rugged leather hard-wearing boot that is handmade in Spain. Great for walking and mucking about when you don’t want to wear a hiking boot. Its stores are in Madrid, Barcelona, Oviedo, La Coruna – and it has four outlet stores including Elche (Alicante).

Another great rustic design is the campero boot. It’s another classic – and is made in Valverde del Camino in Huelva. The boot is such an integral part of this community that the town hall has commissioned a 3m high sculpture of the boot at the entrance to the town. See how one of the larger producers in the town makes its ‘boto campero’. The video commentary is in Spanish but you can make out the process even if you don’t understand the audio. You can buy these boots online from the makers and in the more specialist sports and equestrian stores in Spain. 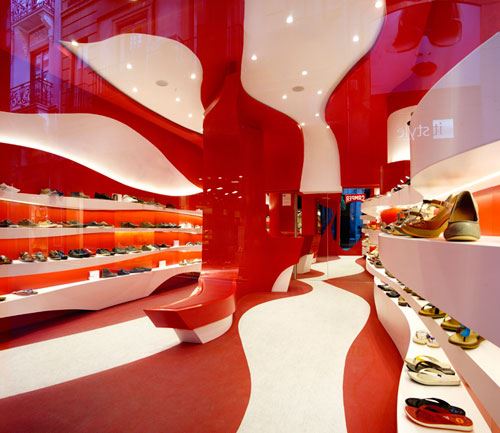 Camper footwear is designed in Spain and the stores are an experience in themselves. Photo credit: http://design-milk.com/curvy-red-and-white-camper-shoe-store-renovation-by-a-cero/

Unfortunately the best known Spanish brand abroad- Camper – currently doesn’t produce its shoes in Spain but its funky designs are very Spanish indeed. The company can trace its roots back to 1877 but in 1975 it was renamed Camper, meaning peasant or rustic. The company has developed a successful hotel and restaurant in Barcelona and Berlin. If you are looking for something fun and comfortable, then Camper is a good option and you can find Camper stores and franchises in every city in Spain.

You probably know that shoe exports are big business for Spain. But did you know that Spain’s European neighbours are its biggest customers – first France (one quarter of all Spanish exports go to France!), then Italy, Germany, Portugal and the UK. The sixth-largest importer is the US. And you will have read that the east of the country is where most of the production happens. 48 percent, that’s almost half, of all the shoes exported from Spain are made in the Valencia area, La Rioja is the next largest exporter, then Castilla-la Mancha and the Balearic Islands. 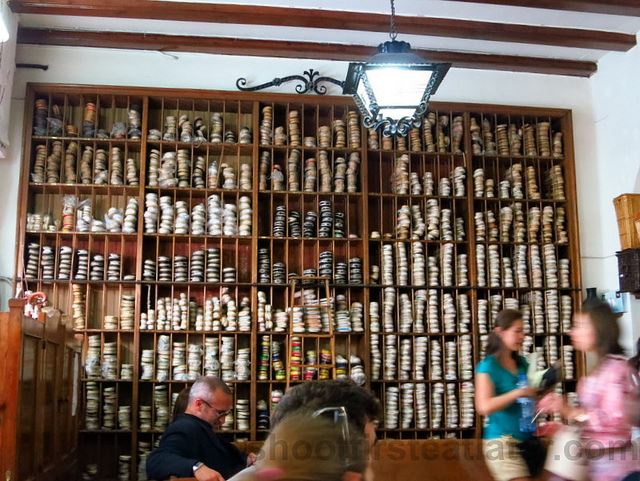 You should be able to find your size here at this espadrille shop in Barcelona  – La Manual Alpargatera – that has been open for business since 1943. Photo credit: Shoot First, Eat Later via photopin cc

9 Want to make shoes an important part of your trip to Spain?

If you want to visit the Spanish foothold of footwear you should go east. We highly recommend you visit the Museo del Calzado (Shoe Museum) in Elda (Alicante) which documents and displays the history of shoe-making in the town back to the 16th century. It is home to 2,311 shoes – of which 1,050 are on show. Shoe-designing courses are run from the museum. And you can see which public figure wins the annual prize for the best shoes. If you’re in Madrid, you should also stop by the Museo del Traje (Clothes/Textile Museum) in Madrid which has a number of interesting vintage footwear exhibits. And if you are travelling with a group and can’t deviate much from a tight schedule – we can always recommend a few interesting shoe shops in the towns and cities you are visiting.

Check out our thoughts on What to Pack for Spain, Shopping in Spain, and the Best Gifts from Spain.