The challenge when visiting Andalusia is often shortlisting what to see and do. Millions of people visit the region every year and most of those will be visiting the Cathedral of Seville, the Mezquita of Cordoba, and the Alhambra in Granada – which all feature in the top 15 monuments in Spain. Although we adore these places, these busy sights aren’t always what make a holiday really special. Our clients most-treasured memories in Andalusia often take place at the more unusual locations…

1 The Palace of the Condesa de Lebrija in Seville

We have yet to hear a negative comment about this wonderful palace which rarely graces the must-see lists for the city. You’ll adore the stunning patios or courtyards, elaborate staircases, beautiful tiles and intricate mosaic floors. Make sure you take the guided tour of the private family rooms. You won’t be disappointed. 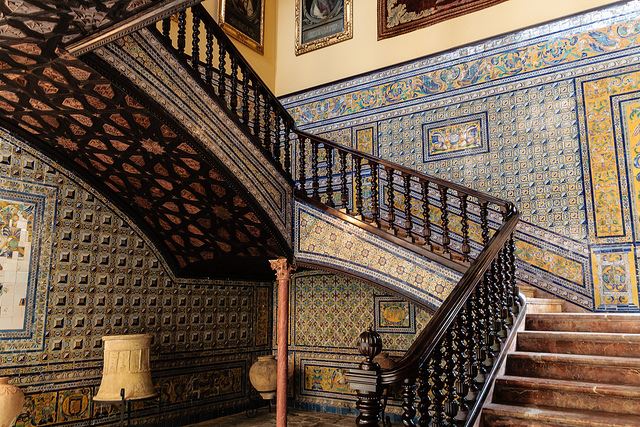 Something we all enjoy when we travel in Spain is discovering the small independent stores. In Seville, be sure to head to Calle Sierpes where you can enjoy some charming traditional shops and shop fronts on this centrally-located pedestrian street. Keep an eye out for the hat shop from 1896 and quite a few shops selling fans – which will come in handy in Seville. Buy one and you’ll probably use it! If you enjoying picking up gifts while your travel, check out our handy guide to shopping in Spain. 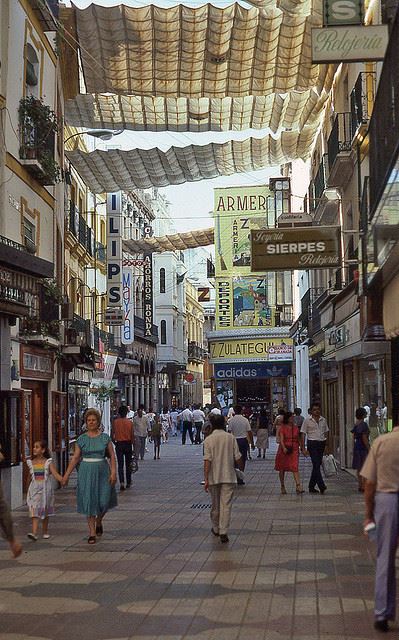 Calle Sierpes – a great place to walk back in time. photo credit: mksfca via photopin cc

3 The Camara Oscura/Perdigones Tower in Seville

This is something we highly recommend. Consider it as a great add-on to a sightseeing tour as you really get a great overview of the city. Worth doing at the beginning or in the middle of your stay so you can investigate the sights that most interest you later by foot. The tower from the 1890s is nice as well. You’ll find the camara at the top. If the day is wet or foggy (an unusual occurrence in Andalusia), don’t go – you won’t have any visibility. 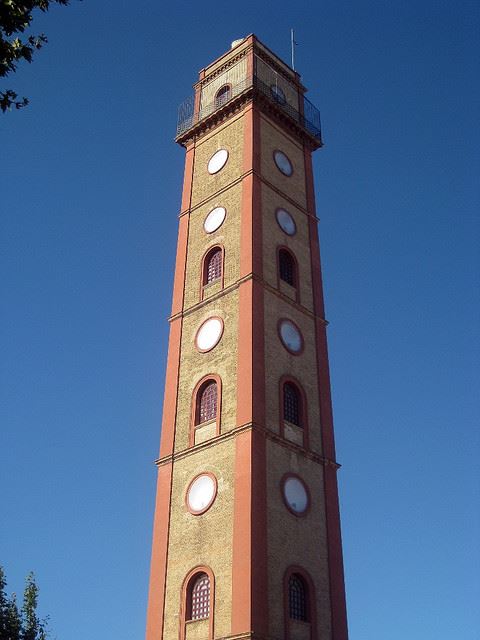 While the Perdigones tower is stunning, it’s what you can see from the top that we think is really amazing! photo credit: Carlos Cesar Alvarez via photopin cc

4 Hospital Art at the Santa Caridad Convent Chapel In Seville

There are many reasons why we like this space. The building is a working hospital so there’s lots of activity but not that of your average crowded museum. It was founded in 1674 and you can visit its baroque chapel and enjoy some stunning art work by Sevillian painters such as Murillo and Valdes Leal. But we especially recommend it because it’s exactly what you don’t expect from a hospital. 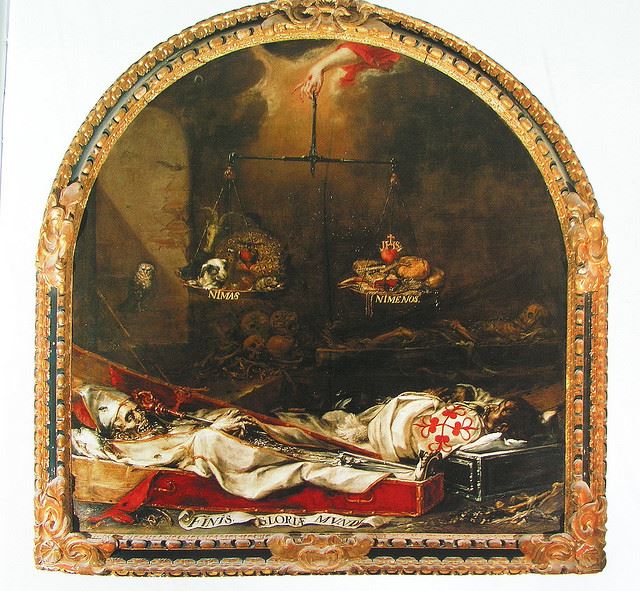 Inside the working hospital you’ll find works such as Finis Gloriae Mundi by Valdes Leal from 1672. Look closer and you’ll see how macabre it is! photo credit: remaud_joel via photopin cc

Sometimes you need to get a different perspective to enjoy a city. Did you know that Seville is Europe’s 4th bike friendly city (after Amsterdam, Copenhagen and Utrecht) and has been called the “poster child of the modern bicycle planning movement”. There is a very successful city bike scheme and a number of private companies also offer bike hire and cycling tours of the city. We can’t think of a better way to see the city and support the great progress made by the authorities. 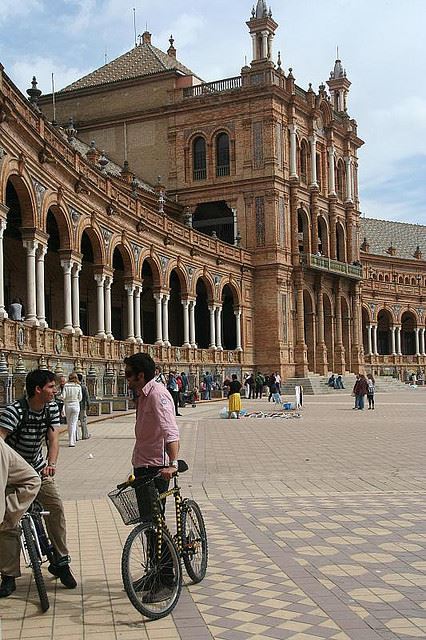 A great bike-lane system and public and private bike rental schemes makes it easier and safer to cycle around Seville. photo credit: webwontok via photopin cc

The well-known guitar maestro from Algeciras, Paco de Lucia, died in February 2014. His passing has been mourned all over the world. If you don’t already have his music on your player, now is the time to purchase it. And we guarantee you won’t find a better soundtrack to listen to as you travel around Andalusia. Why not start with his final album called Cancion Andaluzas? 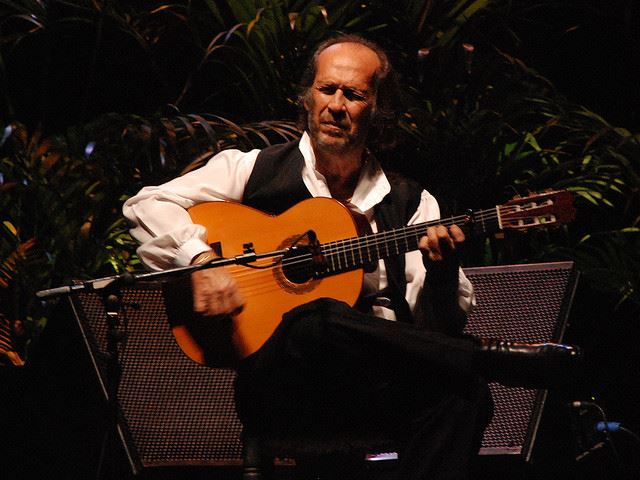 If you want a soundtrack for your trip to Andalusia, it has to be Paco de Lucia – who will be remembered at the Flamenco Bienal this September in Seville. photo credit: montuno via photopin cc

7 Find a Quiet Beach in Andalusia!

The coastline in the south is very beautiful and, although it seems an impossibility with so many visitors to the region, it’s still easy to find quiet beaches in Andalusia, especially out of season. We recommend the beaches of Huelva on the Costa de la Luz when we are looking for just that. We love Isla Cristina for its sandy and soft beaches that are popular with Spaniards seeking the sun and a break from the city but the beaches in general along the lesser visited Costa de la Luz are terrific. Expect simple restaurants with great local ingredients and you’re probably better off packing a picnic for the beach. 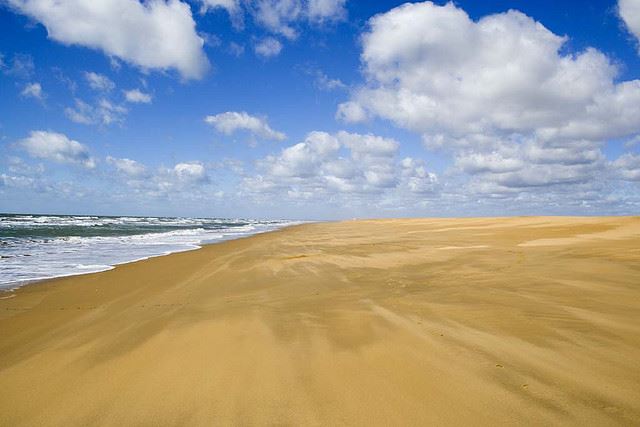 One of the many quiet beaches on the Costa de la Luz in Huelva, Andalusia. photo credit: pericoterrades via photopin cc

8 Understand Andalusian through its Olive Oil – in Ubeda

You cannot visit Andalusia without tasting its great olive oils. We are always singing the praises of Ubeda and its hinterland. You won’t regret it. Stunning UNESCO World heritage architecture, a centre for traditional ceramic production and producer of top quality olive oil. Have it for breakfast (really!), lunch and dinner and buy some to take home. There are plenty of places to stop over – the parador is one we recommend. Visit the Archaelogical Museum & Mudejar House and the Pottery Museum which sells ceramics from local artisans whose workshops you can visit too.

Image of the olive groves from the UNESCO-listed city of Ubeda in Jaen. photo credit: trebol_a via photopin cc

If you are in Ubeda, you should take the short trip to the Palace of the Counts of Villadompardo, in the nearby city of Jaen. We wrote about it in our 14 Hidden Spanish Gems and can’t recommend it highly enough. It’s a beautiful renaissance style building from the 16th century. However the Arabic baths within the palace, date back to the 11th century. They are the largest surviving in Spain. Really special visit and off-the-beaten-path too. 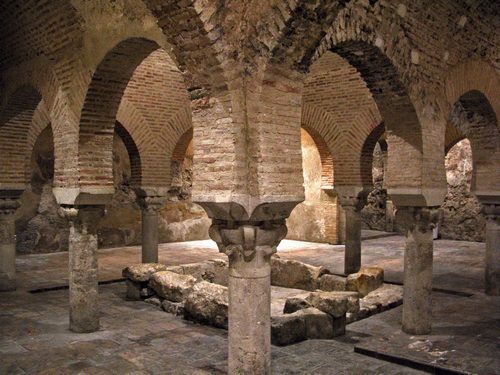 10 Floral Heaven in the Courtyard ‘Museum’ of Cordoba

Everybody who goes to Cordoba visits the Mezquita – with good reason – it’s utterly unique. But make sure to leave some time to visit another singular space  – the beautiful courtyards and gardens of the Palace of Viana. It’s known as the Museum of Courtyards – as it has 12!  A must-see for gardeners and a great way to experience the pride of Cordoba – its courtyards – out of festival time. See our post on patios for more information on these special spaces and look over our post on gardens in Spain. 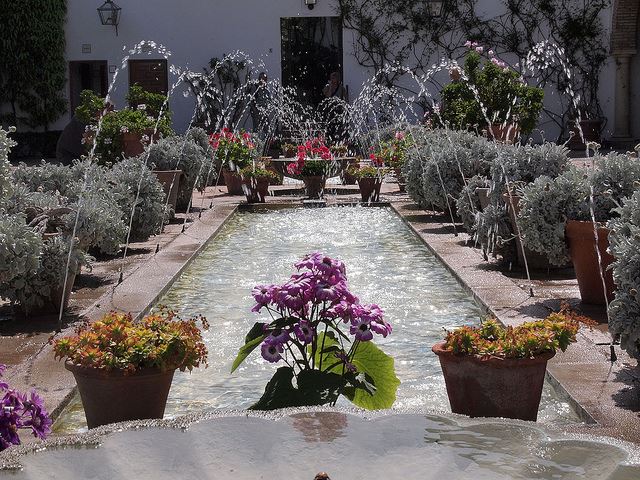 The Pillar Courtyard at the Viana Palace in Cordoba. photo credit: Chris Juden via photopin cc

One of our favourite white-washed towns is Arcos de la Frontera. It’s a fortified town up high on a ridge located between Ronda and Jerez. As you can imagine it has seen quite a few battles. You’ll enjoy a day here and can use it as a starting point to explore more of the white-washed villages. There are plenty of ceramic stores to explore and a castle, churches, palaces and convents to visit. As always, the parador is a good place to stop and have a drink. It’s a busy place at fiestas – during Easter week and for its Feria de San Miguel at the end of September when its horse and human population soars. 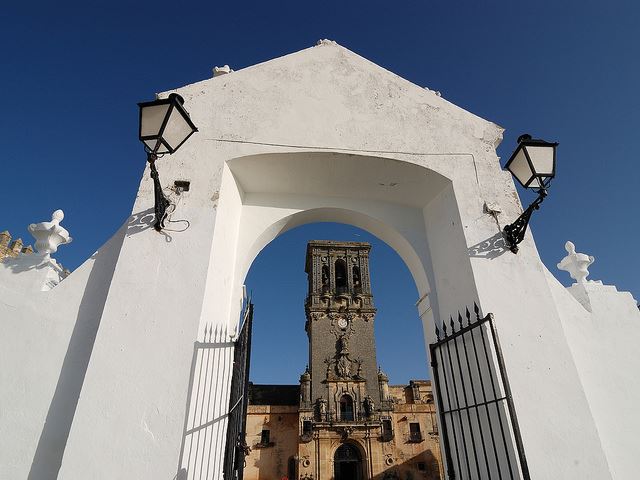 12 The Many Many Museums of Malaga

Seville, Granada & Cordoba are the big three cities in Andalusia but we encourage you to consider the city of Malaga too. It’s home to a number of world-class art museums including the CAC Malaga, the Thyssen Museum of Malaga, the Centre Pompidou Malaga, the Russian State Museum in Malaga and of course the Picasso Museum and his birthplace is also a museum. It’s not officially ‘art’ but Malaga’s classic car museum which we wrote about here is also great visit. If you like the Easter processions – which are huge here, you should try visit when they are on. If not, visit the museums run by the cofradias. And the Interactive Music Museum is a good one for young members of the family.  Also for foodies, there is a very interesting gastronomic scene emerging here. Be sure to ask us about it. 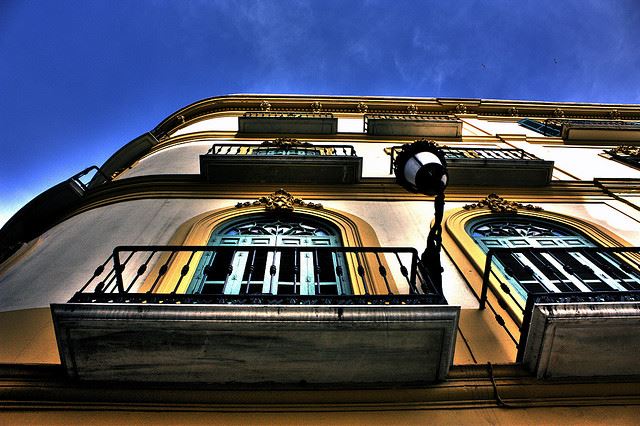 Picasso’s balcony. You can spend an entire week visiting museums in Malaga. photo credit: Two Steps Behind via photopin cc

And just in case you thought you had seen everything, you shouldn’t miss out on the chance to see the cave houses near Granada. Guadix has the highest concentration of this unusual dwelling  – thanks to the composition of the soft rock in the area – and it is possible to visit and stay in the caves in this area. You’ll also see the Cave Museum which explains how the houses were made and what they were used for. A fascinating visit and one to keep the kids happy for sure. 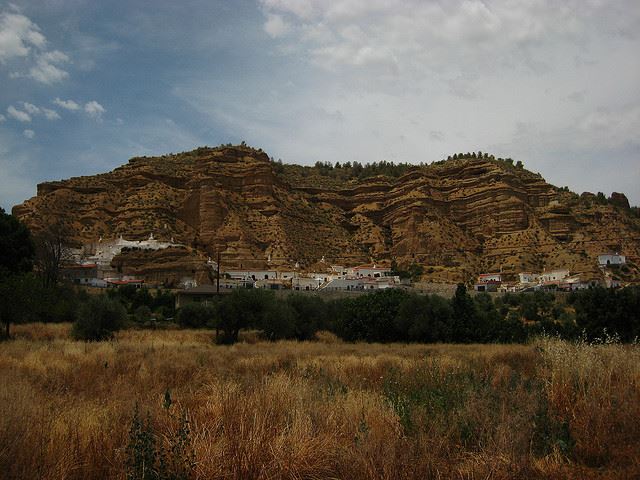 There are some great train journeys to be taken in Andalusia – and the views are amazing. It’s not for every budget but if you want to see the big sites – in a different way – it’s hard to beat the Tren Al Andalus that takes in Cadiz, Jerez, Seville, Cordoba, Ubeda, Baeza, Granada and Ronda. Once you board the train, you don’t have to think. Meals, excursions, tours – its all organised for you – you just have to sit back and enjoy Andalusia. Pro-tip: If you’re in a hurry to see the sights, you can opt for the high-speed train which will shuttles you from Madrid to Cordoba and Seville – see our post on the high-speed train in Spain. 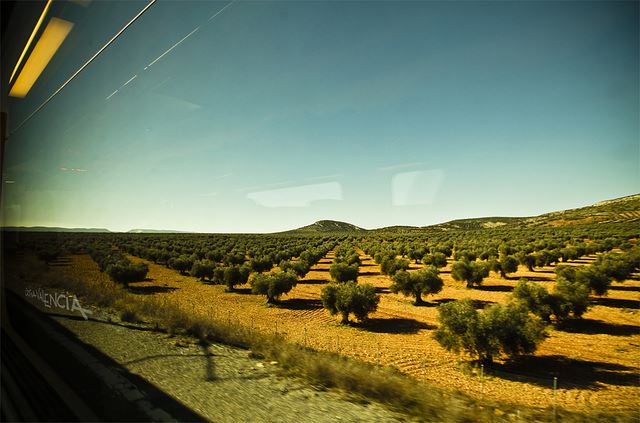