The film crews love Cantabria. Last year it was the Seve Ballesteros biopic. This year it’s the story of Altamira with Antonio Banderas at the helm. We know why it’s so popular because we live here and so if you’ve been thinking about a trip to Cantabria, here are our top travel tips for Cantabria 2015!

Here at Totally Spain we plan trips all over Spain and into Portugal and we are really delighted to see Cantabrian tourism getting a boost. We’re not at all surprised – after all we relocated our office here in 2005 and we love living and working from here. For us it’s great to see more visitors from abroad enjoying what’s been a popular holiday destination for Spaniards for centuries. And 2015 is a big year for Cantabria. Here’s why :-

Antonio Bandera and Rupert Everrett have been in Cantabria this Winter filming the movie ‘Altamira’ by Chariots of Fire director Hugh Hudson about the cave of the same name. The original Altamira cave – the Sistine Chapel of Pre-history – was discovered in 1879 and has been described by the World Heritage Convention as offering “masterpieces of creative genius and humanity’s earliest accomplished art”. You can read all about it here. Very limited numbers are given access to the cave so we recommend visiting the on-site replica (and you may be one of the lucky ones chosen on the day to see the real one).

If you are interested in cave paintings you’ll already know that the BBC’s Professor Brian Cox has a soft spot for El Castillo cave just 20 mins from Altamira in Puente Viesgo. We love this cave and tip it as another big draw for Cantabria in 2015 also. Discovered after Altamira in 1903, it offers many clues about how homo neanderthal and homo sapiens lived, fought, hunted and dressed themselves. Its 225 painted animal figures including animals such as horses, bison, stags, goats and mammoths, and another 50 references to the human figure are dated back to 40,800 years ago. Read our post about Cantabria caves here to read about other magical caves and cave art in Cantabria.

All eyes in Cantabria are on this building site in Santander that will house the privately-funded arts centre run by Banco Santander’s Botin family. It’s an exciting space and we can’t wait to see the views from the top of this iconic building designed by Pritzker prize winner Renzo Piano who’s best-known for the Shard in London and the Pompidou Centre in Paris. The Botin Foundation has decades of experience in compiling excellent cultural programmes and we can’t wait to see them make great use of the new centre. We’re also looking forward to trying out the cafe run by Michelin-starred Jesus Sanchez who has been running his Cenador de Amos restaurant in the nearby town of Villaverde de Pontones for the past two decades. We expect to see major exhibitions coming to Santander. The inaugural show will feature Carsten Holler who always brings colour and movement to his exhibitions. And we can’t wait for the Goya exhibition in conjunction with the Prado Museum booked in at the Centre also.

This is a pioneering wildlife reserve and a perfect day out for families. We’ve loved tracking the birth of the baby gorillas over the past few years and watching them thrive in Cabarceno. We think the ‘Visita Salvaje‘ or Wild Visit is a great innovation that will really take off in 2015. It’s a 7 hour safari (with lunch) where you join one of the park’s rangers in their jeep and spend time up close with the animals, learning about their personalities, their habitat and conservation programme. You’ll be able to pet and touch some of the friendlier animals, take photos of the less friendly ones and bring back some very special memories of the day. Cabarceno is 17km from the city of Santander and is perfect for families holidaying on the coast or those travelling by ferry who want to stretch their legs before a long journey.

4 The Coastal City of Santander

We love Santander’s old world grandeur, its café culture and its urban beaches and think it’s a brilliant destination for a city break. It often compared with its Atlantean neighbours San Sebastian and Biarritz but we think it’s unique and enjoy its understated manner. If you are a fan of city beaches and enjoy eating out, you’ll adore its countless excellent restaurants and bars. Its 110-year old Mercado de la Esperanza food market is always a great draw too. Don’t forget to visit the Magdalena Royal Palace designed to remind Queen Victoria of Balmoral. Enjoy an artisan ice-cream by the Casino and walk the Sardinero beach to see the kite-surfing and other water sports. There’s lots of great walks whether that’s through the streets of Puertochico or along the coast up towards the lighthouse. And make sure you take the ‘lancha’ passenger boat to the Puntal sandbank which is hugely popular with Santanderinos. 2014 was a big year for the city as it hosts the ISAF Sailing World Championships and in 2015, Santander is more ambitious than ever. Enjoy it here in tilt shift mode…

5 Dramatic Landscape and Hiking in the Picos de Europa

Not many people visiting Spain know that after Switzerland, it’s the most mountainous country in Europe. Cantabria is traditionally called ‘La Montana’ – the Mountain – and it’s most famous range is the dramatic and beautiful Picos de Europa. It is reached by driving through an impressive 20km long gorge known as the Desfiladero de la Hermida. Along with most of Spain, we love Liebana Valley for its ‘micro-clima’ which keeps the cloud cover away from this beautiful part of the world. Stay in or near the market town of Potes (we always rave about the Hotel del Oso). If you prefer a more remote location, the Hotel Aliva is a great option – it can be accessed by cable-car,  jeep or on foot. What we really love about Picos at the moment is the entrepreneurial spirit in the villages and towns. We love seeing the number of sporting and sports adventure companies increasing and encourage everybody to visit the artisan food producers producing great wines, spirits and cheeses in this privileged location.

6 Spiritual Cantabria – The Camino and the Lebaniego Way

If you are exploring mindfulness or any other level of spiritualness – you have probably read about the Camino de Santiago. Cantabria is on the Northern Way which includes a very interesting sub-route called the Lebaniego Way to Santo Toribio in the Picos de Europa National Park. It’s a deviation taken by a number of the Camino pilgrims including Francis of Assisi 800 years ago. 2017 is a big year for this route because the day of Saint Toribio on 16 April falls on a Sunday – which means the numbers of walkers will increase hugely. If you are looking for some peace and quiet, take our advice and walk the route in 2015 or 2016!

7 The Gastronomy of Cantabria

We can’t stop raving about the quality of food in Cantabria. Not only do we have excellent fish, meats, cheeses and much more, we also have Michelin-star chefs preparing world class cuisine. And the standard of catering in the average bar and restaurant is also extremely high. This is a region that understands its food. But don’t take our work for it – come here and watch the locals enjoy ‘rabas’ and a white wine or vermouth on a terrace. Taste the local ‘queso picon’ leaf covered cheese on crusty country bread after a hike in the Picos. Improve your Spanish with the array of fish on offer in the foodmarket in Santander. Or course, it’s not the best known region in Spain for its gastronomy. The Basque Country and Catalonia have staggering reputations and well-deserved they are. But in Cantabria, you’ll find the concept ‘slow food’ never needed to be re-introduced. That’s how it’s always been done. There are lots of great artisan food producers to visit – we love Dougalls Brewery in the charming spa town of Lierganes – where, for just five euros, Andrew the master brewer provides a tour and tasting of his extensive range of craft beers produced on site which are served with much humour and some delicious local award-winning cheeses. You can catch sight of Andrew and the lovely Lierganes in this very sweet wedding video. We’re also big fans of the blossoming winery tourism sector here and hope we’ll be clinking glasses at the new winery proposed for Treto. What follows is a tasting of rabas in Santander – although it helps if you understand Spanish, you’ll get an idea of how this iconic aperitif is served. Don’t leave Cantabria without trying some!

8 The Beaches of Cantabria

Whether you like to swim in the sea, paint it or sail on it, there is a beach that’s perfect for you and your needs. Urbanites love the beaches in the city of Santander – the Sardinero beaches are wonderful especially during the Summer months when you’ll find the place is buzzing and the off-the-beaten-track beach of Matalenas is a real treasure. We tend to go to the beaches across the bay from Santander. The Ribamontan al Mar area is the first designated Spanish Surf Reserve and our girls go to surf school here. It’s been a great surfing hangout since the 1960s and there’s a wonderful buzz about the place all year long. We also like nearby Loredo when there’s snow on the mountains – you can’t beat a view with the beach and the snow! If accessibility is a concern for you, did you know that Arena Beach near Isla in Cantabria won an award for the most accessible beach in Spain. So come on – it’s never been easier to dip a toe in the Cantabrico!

Getting here – Cantabria for City Breaks and Extended Trips to Spain

Fancy a city break? There are direct flights from London four times a week and direct connections with Dublin, Edinburgh, Brussels, Paris, Dusseldorf-Weeze, Frankfurt-Hahn, Bergamo-Milan and Rome. And if you want to tag on a trip to Madrid, Barcelona, Malaga or Seville or the islands, you’ll find direct connections there also.

Travelling from afar? We can organise a a 7-day break in Catalonia and tag on a 3-day break in Cantabria to enjoy the rural side of Spain. Incidentally, did you know there is a Gaudi-designed building El Capricho? Or how about a week long trip in Andalusia seeing the Alhambra, Mesquita and Alcazar. We can tag on a 4-day break in Cantabria exploring the caves of Altamira, El Castillo and El Soplao.

If you take the ferry to Spain, you might be heading down south for a few weeks but we can organise a day in Cabarceno, a guided tour of the Botin Centre and a day to the Picos including a cable-car trip to one of the mountain peaks – that will kick-start the break in style. 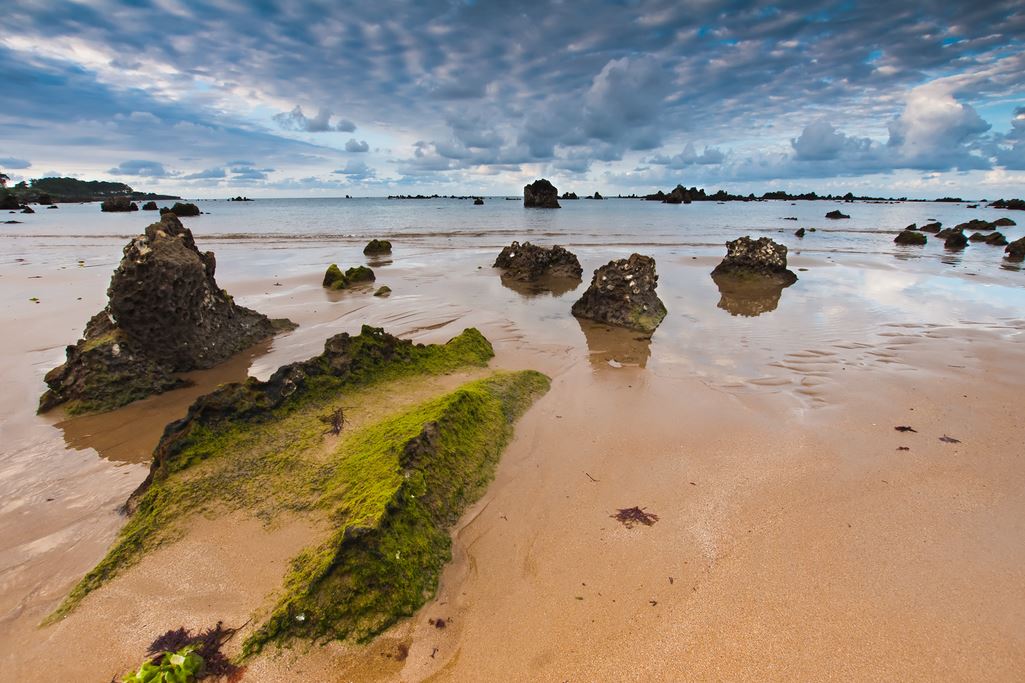