Five years in the making, the Renzo Piano designed Centro Botin Santander opens shortly and here at Totally Spain we can’t wait to add this space to our list of inspiring architectural and cultural spaces. We’ve been designing custom travel itineraries throughout Cantabria and Spain since we set up in the year 2000 and being based near Santander in Cantabria, we are very keen to set foot inside to experience the design, the art and the catering with none other than local, double Michelin-star chef Jesus Sanchez’ at the helm.

So much is expected when a new museum or cultural landmark opens – and this one is no different. Designed by the architect responsible for the Shard in London and the Whitney Museum of American Art in New York, Renzo Piano also worked on the Centre de George Pompidou in Paris which is probably the building that defined him as a young architect. This is his first building in Spain and expectations are high but based on what we’ve seen so far, it does everything it should and more.

Perched out over Santander bay, this building (or buildings really – there are two separate structures here) is located on what used to be a car park for the ferry port. Emilio Botín, then executive chairman of Banco Santander, decided he wanted to honour the work of the family foundation, Fundación Botín, which he also headed. He approached Renzo Piano to devise a centre to house the Botín Foundation’s art collection and from which to enrich the lives of the city’s residents by furthering its educational programmes developed with Yale University. The Foundation firmly believes that by fostering creativity, a city or society can reach its true potential. 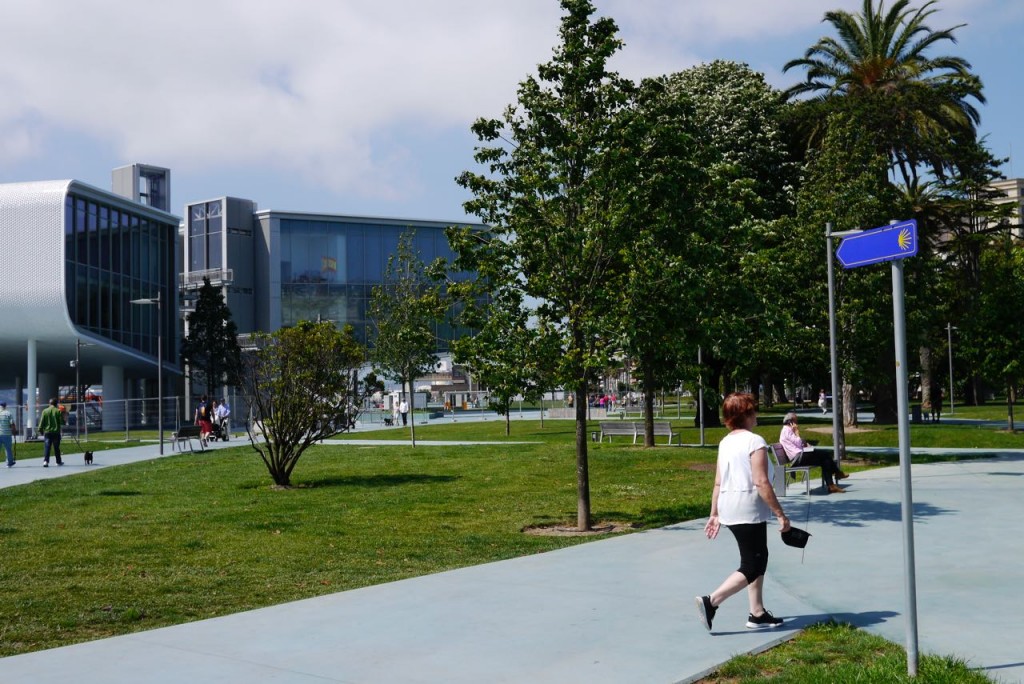 The Centro Botin Santander opens in late June 2017 with three concurrent exhibitions that set out just how ambitious the Foundation is. Carsten Höller is the headline show. Carsten is the man who encouraged Londoners to slide through the Tate Modern and had visitors sleep over in the New York’s Guggenheim. In Santander, his flickering light illumination display has been in action at Pereda Gardens for ages and we are keen to see what else he has in store for us. We understand there will be a sleepover courtesy of ‘Elevator Bed’ where the lucky overnighters can experience the rest of the exhibition as the bed rotates and goes up and down to a height of 3.5m! The Foundation’s private collection will be the source for the show called Art at the Turn of the Century which will feature the work of Tacita Dean, Carlos Garaicoa, and Juan Uslé among others. The third exhibition is by none other than Goya. 60 drawings of the maestro will be on show under the title of ‘Agility and Audacity’ and is the result of a five year collaboration between the Prado Museum in Madrid and Fundación Botín. Outside, Cristina Iglesias has designed a sculpture exclusively for this space – we spied it the other day and its discreet subtle lines and shades made it a winner in our book already.

But perhaps the most important element on show (for the first few visits at least) is the Centre itself. 270,000 ceramic tiles cloak the exterior of the two structures which not only makes it look effortlessly elegant and light but also reflect and diffuse the light that bounces off the bay. That said, it’s actually quite a task to see the space in its entirety. The Foundation hired the services of veteran landscaper Fernando Caruncho, to modernise Pereda Gardens – the parkland that surrounds the art space and the result is very positive. So leafy and green is the park that it’s often hard to glimpse a sight of Centro Botín. And we can’t wait to walk on the pachinko which is a series of glass and steel walkways that join the two buildings and look out over the park and the bay. Watch this space! 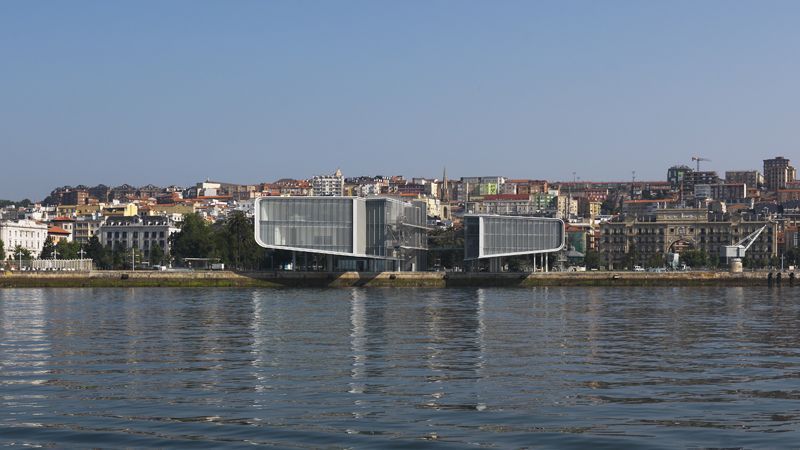 Renzo Piano set the centre on stilts so the bay it’s still visible by those walking behind the centre. Pic credit: Enrico Cano for the Fundacion Botin

You don’t need a crystal ball to predict that the Centro Botin Santander is going to be an overnight success for the Foundation, the city and the region. It’s hard to see how the Centro Botín could fail. Its elegant design, with the backdrop of the charming city and bay of Santander made it the Summer city of choice especially when King Alfonso and his wife Victoria vacationed in the Magdalena Palace from 1913-1930. One century later, the Palace still draws a crowd and the nearby beaches are still busy with the Madrilenos who escape the heat of the capital in the Summer.

Observers of Centro Botin Santander often try to compare it with the Guggenheim Museum in nearby Bilbao. It’s just an hour or so to Bilbao by car. Did you know that the Guggenheim is celebrating its 20th birthday this year – you can read about it in our guide to Bilbao here. Although we do compare them from time to time, we believe that doing so is actually a disservice to both. We’d recommend visiting the two art spaces to see how each perfectly reflects the timing, the site and the history of its city. That way you’ll see for yourself how Gehry’s angular Guggenheim reflects its home city’s edgy, gritty and industrial past whereas Renzo Piano’s Botín Centre is more curved or organically shaped as if were moulded by the water and the wind. Wind and water are important here – that’s what brought the Spanish Sailing Federation to set up a centre for its high performers. The World Sailing Championships were held here in 2014 and as we write, the World Cup Series Final is taking place. Time will tell whether there is a Botín effect in the same way as the Guggenheim, but one suspects that the foundation, set up over 50 years ago, did not venture down this path without a clear sense of its purpose and future. 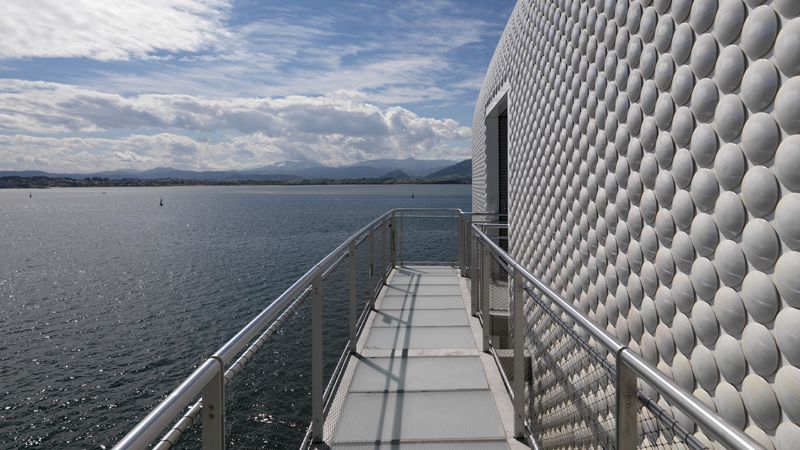 Just look at the amazing views from up on the Pachinko looking out on the bay. Pic credit: Enrico Cano for the Fundacion Botin

If you like the look of what you see here but don’t know very much about Cantabria – we would single out the city of Santander with its beautiful beaches and many museums, the UNESCO-listed cave art at Altamira and other locations nearby, the medieval villages such as Barcena Mayor and Santillana del Mar, and the picture-postcard villages of the Picos de Europa National Park. If you have more time, try to catch a few waves at the surfing reserve that is Ribamontan al Mar, visit Isla which is part of the EDEN network, walk some of the Camino Lebaniego, try your hand or simply visit the golf course at Pedrena where Seve Ballesteros grew up and lived, try out the new rides at Cabarceno Nature Park, and explore Cantabria’s past at the Capricho de Gaudi in Comillas.

We can, of course, help you select the best accommodation here which is of a very high standard. As you’d expect with an area that was popular with the Royals and their entourage, you’ll find lots of hotels from that belle-epoque period in the Sardinero area. The city centre offers a number of chic modern hotels and outside the city, there are a number of Paradores including two in Santillana del Mar and one in Limpias plus other luxury hotels, villas and self-catering options. 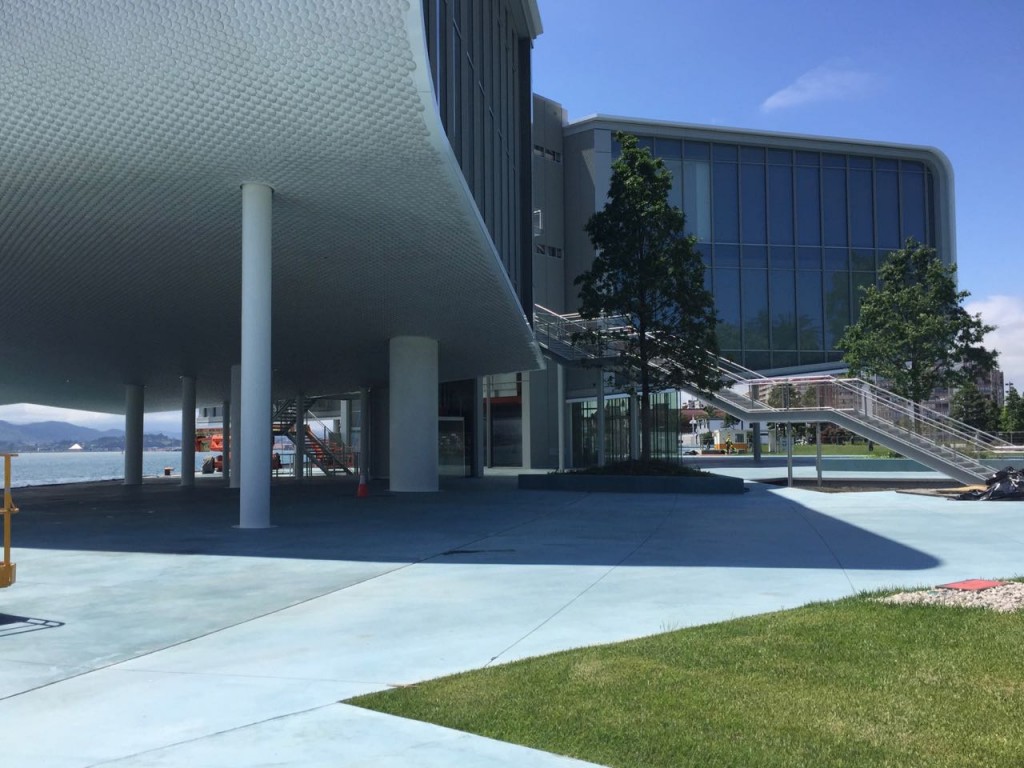 You can’t stay here unless you are lucky enough try out Carsten Holler’s ‘Elevator Bed’ – but we have lots of accommodation recommendations for you elsewhere in the city and throughout Cantabria. Pic credit: Pamela Cahill

If you haven’t heard of the foodie scene in Cantabria, not only have you not been in the North of Spain but you mustn’t have been to Madrid either recently. Every second restaurant that opens in Madrid recently seems to be an offshoot of one of the Santanderino restauranteurs who have finally brought quality Cantabrian cuisine to the capital – see La Primera, La Bien Aparecida, La Maruca & Canadio Madrid to see what we mean. Of course, their success reflects the quality of the great raw materials in Cantabria.

You won’t have to go far from the Centro Botin Santander to taste good food. Chef Jesus Sanchez who holds two Michelin stars for his restaurant El Cenador de Amos is in charge of catering in the Botín Centre and we can’t wait to see what surprises he has up his well-pressed sleeve. There are lots more Michelin stars to discover in Cantabria as well. Annua overlooking the beach at San Vicente de la Barquera is a great place to stop and dine and was just awarded its second Michelin star this year. And you also have El Serbal, Solana and El Nuevo Molino in Cantabria with a Michelin star each. Plus, the hundreds and thousands of family restaurants, bars and cafes that proudly serve up the best seafood, cheeses, meats and more.

Whatever you do, don’t leave Santander without trying a platter of rabas and a local vermouth, white wine or a local craft beer. The anchovies are also out of this world  – if you haven’t been a fan of them up until now, it’s all about to change. Local blue cheeses from the Picos de Europa are also worth ordering. Unless you love hearty stews and have just come back from a hike or walk, we’d probably steer you clear of the cauldrons of local ‘cocido’ which is a mountain stew but do try to order a game casserole or fish stew or any of the wonderful grilled, baked or fried fish dishes you’ll find in Cantabria. Read our guide to what to eat in Cantabria for more suggestions. 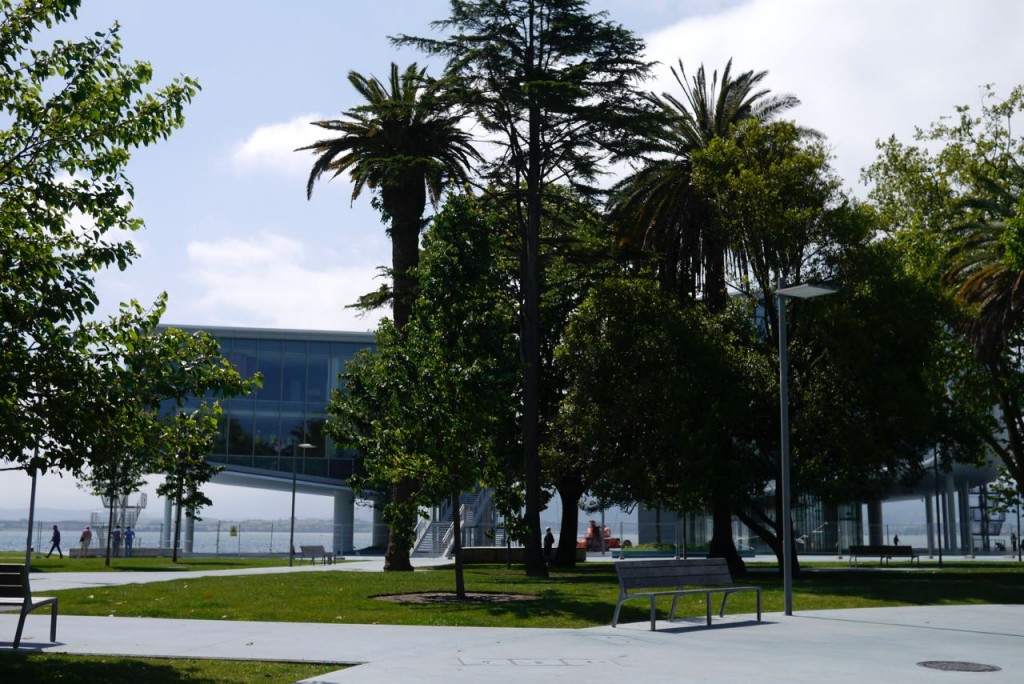 As you can see, it’s really hard to see the centre – as its surrounded by the foliage and trees in Pereda Gardens. Pic credit: Pamela Cahill

If what we’ve written on Centro Botín Santander is tempting you to travel here, you should know that it’s very easy to get to Cantabria. There are numerous direct connections into Santander’s airport from London, Rome, Frankfurt, Edinburgh, Dublin and Madrid & Barcelona of course. You can arrive by car, bike or on foot by ferry (and the views as you arrive into Santander are stunning!) with Brittany Ferries from Plymouth and Portsmouth. And you’ll find lots more combinations by rail and bus. You can also drive from France as Santander is just 2.5 hours by car from the French border. If you like a slower pace, you can actually walk the coastal Camino de Santiago into Cantabria and on towards Santiago de Compostela. If you want to avoid the blisters, perhaps you should look into travelling the Camino by rail on the luxurious Transcantabrico train and stop off in Santander to enjoy this wonderful new art centre and the many other attractions in Cantabria!