We’ve just waved off a large group from Australia who undertook a Customised Agricultural Themed Tour of Spain & Portugal. We specialise exclusively in bespoke itineraries at Totally Spain and we’ve really been able to flex our muscles and showcase the very best of Spanish agriculture on this one! We’ve done quite a few of these research trips for agricultural companies and organisations since we started in the year 2000 and we thought it might be interesting to share the types of trips and places that we can custom arrange for you and any group interested in Agricultural Touring in Spain.

About Agricultural Touring in Spain

We normally begin working months in advance with the client so as to understand their needs and to create the best itinerary for them so you won’t be surprised to hear that by the time this group stepped off the plane (or six separate planes in their case) onto the tarmac in Spain, we had everything well organised. (That’s why we ask our clients so many questions before they travel!) 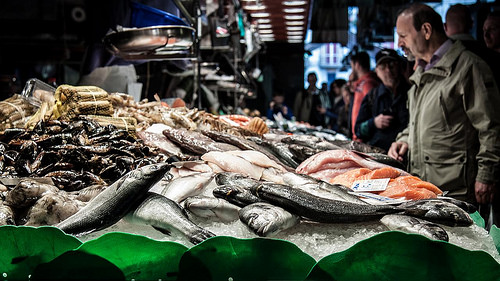 As well as seeing all the main sights in Barcelona, you’ll visit the city’s mythical markets and gain an understanding of how the local supply chain works. photo credit: La Boquería via photopin (license)

Whenever jet lag is a consideration (and it was in this case) the first day is all about a comfortable transit to the hotel with time to relax and settle in. Dinner is a chance to meet the group, learn about elements of Spanish gastronomy and discuss the plans for the following day.

The second day was filled with a city tour – in this case of Barcelona and its quirky art and architecture, imaginative food and vibrant street life. All the major sights such as Gaudi’s Sagrada Familia, Montjuic, Park Guell and the Olympic Port are visited plus an atmospheric walking tour of the Gothic Quarter and the Ramblas takes place in the evening. 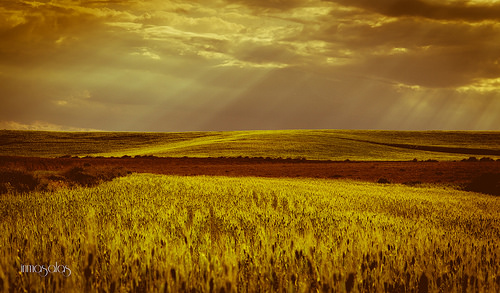 Leaving the city behind, it’s time for your group to see the fertile countryside and meet some of its caretakers. photo credit: SPRING COLORS via photopin (license)

By day three, the group is fully recovered from the strains of the flight and ready for the open road. With this group, we wanted to showcase a variety of agricultural industries including Iberian pig breeding, lamb breeding and farming, bull breeding, wine production, olive oil production, grain and cereal production, garden vegetable farming, fruit farming and cheese production. We also wanted to show how the supply chain operates from the little to the large and visit rural cooperatives, world-class city foodmarkets and provide many opportunities for this agricultural group to speak with the producers themselves about the particulars of their sector.  We are also very particular about finding authentic farms and not just locations that are open to the general public and visited frequently by tourist groups. 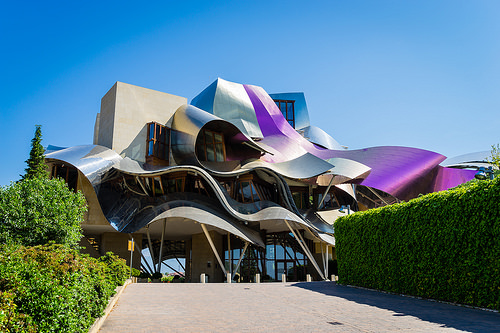 Alongside the agricultural site visits, we also wanted to give a sense of Spanish culture and take in some of the most important cities including Madrid, Barcelona, Seville plus a handful of what we call ‘boutique destinations’ with a slower pace of life where you can appreciate the Spanish culture with a little less hustle and bustle. And without a doubt, Spanish cuisine is an important element in any trip and much more so, when in comes to agricultural touring where we try to include special meals that feature produce from those same suppliers that they have visited that day. 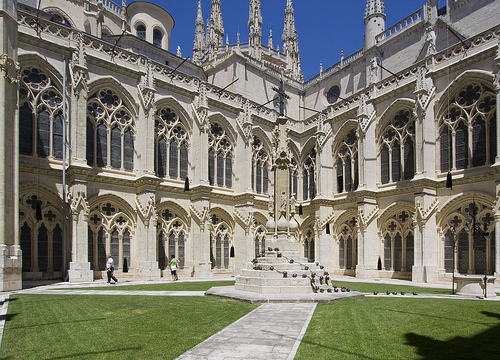 And there’s time to visit some UNESCO beauties along the way too! photo credit: Burgos Cloister via photopin (license)

The territory covered really depends on the time available, the size of the group and their willingness to cover distance. As you’d expect with an agricultural group, you’re generally talking about physically fit self-employed individuals that may be travelling with their spouses. And it’s a group that doesn’t get away too often and really needs to maximize time away from their businesses. We plan many trips that straddle both Spain and Portugal and also produce packages into Morocco and Gibraltar. On this trip, we started in Barcelona, travelled through Spain, crossed into Portugal and finished up in Morocco! It’s no mean feat to take on 2,500 km of territory in Spain and Portugal and when you are talking about a group, effective planning is vital to the trip’s success. 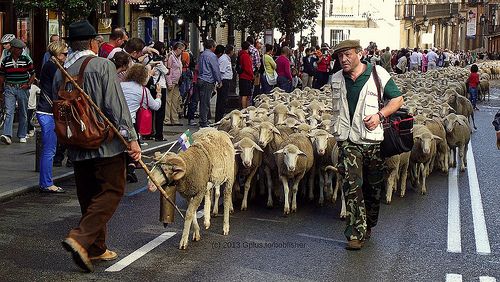 If you time it right, you could even come across some interesting traditions in the most unlikely of places such as Madrid’s Transhumance Parade. photo credit: Madrid – Pastor y su rebaño en la XX fiesta de la trashumancia via photopin (license)

Of course, it’s not all about work. As we said, it’s important to program in cultural elements whether that’s museum visits, wine tastings, food tours and musical experiences – but we always make sure that our guides are 100% briefed on the group they are working with, where they have been and where they are going – that way – context is provided at all times. 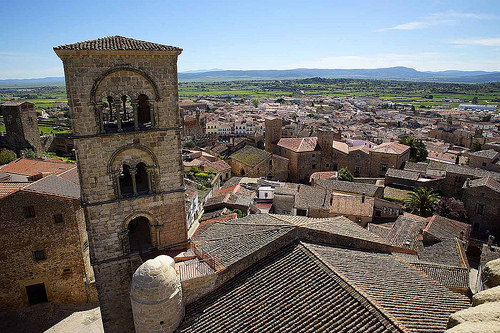 Throughout the trip, you’ll enjoy meals at hand-selected restaurants in stunning cities, towns and villages where you can soak up the Spanish atmosphere. photo credit: DSC07489- TRUJILLO, Spanien via photopin (license)

This recent trip was an extensive 15+ day trip but we’ve also produced similar trips over shorter time spans. Take for example the 8-day trip we produced for 40 farmers that started in the North of Spain in Bilbao. It was a European group so there was no jet lag time to factor in and straight away they were off on research visits. We planned visits from the North to the South of Spain and took in a dairy farm, a fish farm, a dairy business, a beef breeder with its own butchery, a seed potato co-op, a cereal farm, a pea growing and processing unit, a vineyard, a biodiesel plant, an olive oil production plant, a rice growing estuary, an olive processing plant and a major citrus fruit farm before the group flew back home from Andalusia. 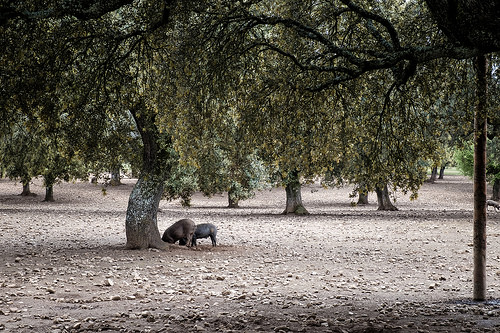 To understand why Spanish ‘jamon’ is so highly valued, you’ll have to visit the farmlands where the Iberian pigs roam free, dining on acorns. photo credit: Cerdos via photopin (license) 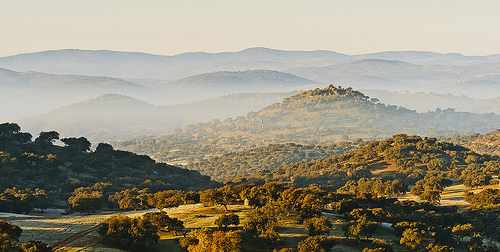 The scenery as you travel around Spain is varied and spellbinding. photo credit: Paisaje sin título via photopin (license)

It’s not all about the product either. Sometimes it’s about departments within a sector or sectors. Nothing pleases us more than being able to delve deep into a particular industry – and we put together tours with an emphasis on, say, marketing and brand building, or sales and distribution. We can also focus on approaches such as organic farming. 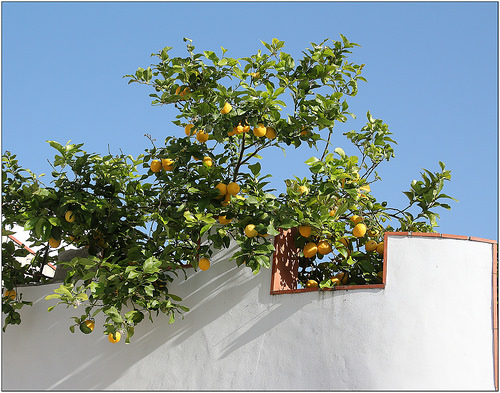 We can also compare and contrast the high end with the entry level – perhaps by visiting a winery or olive oil producer operating as a small independent co-operative and comparing it with one of the larger more exclusive brands. The age of a business is another factor and we like to mix up new businesses with ones that have been operating since the 15th century! We can also examine agricultural businesses that are re-inventing themselves – perhaps having started out as purely agricultural but now having diversified or branched out into complimentary activities such as restaurants, hotels and other accommodation, food tours and other experiences. 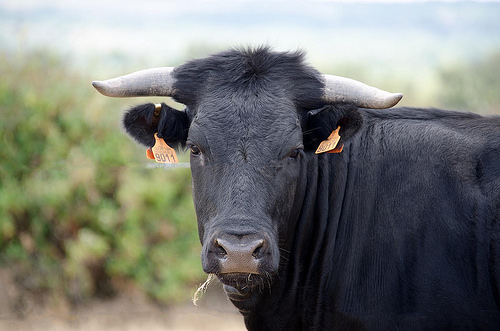 He might not look too intimidating but we’d stay behind the fence for this Toro Bravo. photo credit: Toro Nuevo via photopin (license)

Whatever the emphasis or focus, we always agree that the best part of these trips is watching the people who work at and run these businesses in Spain interacting with our group – wherever they are from. Some of the visits are to multi-million euro generating operations while others might be smaller operation with one or two ‘fly-by-the-seat-of-their-pants’ entrepreneurs and each visit is completely unique. Time and time again, we find that it’s the variety of the operations and the personalities of those showing a group around that really makes the trip.

We always tend to receive positive feedback from our clients about the planning and level of access provided to our groups when on research trips – which makes the hard work we put into each specialist custom trip so worthwhile. 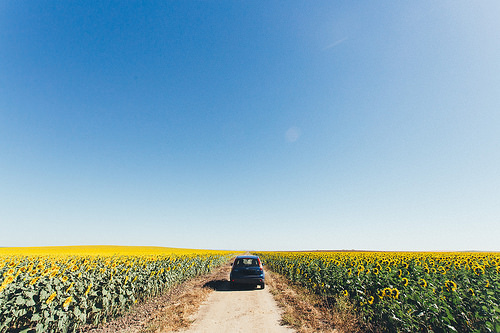 Don’t you see yourself here amongst the sunflowers? photo credit: Road to Sevilla via photopin (license)

Not yet convinced that Spain is the right place for your agricultural research trip?

Because the majority of the locations are working farms or food facilities, they don’t want to be listed publicly. If you want to know more about the nuts and bolts of these types of tours, please get in touch and we can email you past itineraries outlining the specific site visits undertaken.