So we’ve just returned from the Basque Country where we spent the weekend reacquainting ourselves with Basque cider and the  ciderhouses or `sidrerias´of this wonderful region.  If you are a food lover and really want a unique, local experience when in the Basque Country or as part of your custom trip to Spain, then Totally Spain can set you up with a top notch private tour, over two or even three days, visiting and dining in historical cider houses;  touring and sampling at boutique cheeseries and all while staying in centuries old Basque farmhouses. 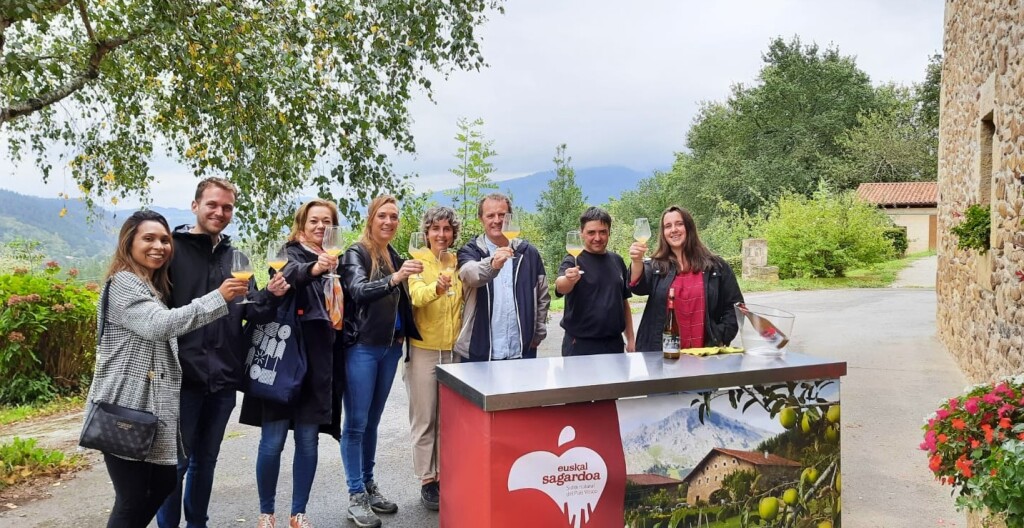 What is a Basque sidreria or cider house ?  Well, it’s not a bar nor is it a place that people go to get crazy on sidra  `apple cider´, cider has just  4% – 6% alcohol content in any case.  No, the sidrerias are where Basque people go to eat and socialize with family and friends, in the idyllic countryside setting of a Basque farmhouse or `caserio´ that is usually set among apple orchards and woodland.  Yes, there are some city sidrerias but the majority (and the most authentic) are to be found in the rural areas around San Sebastian in places like Hernani and Astigarraga.  San Sebastian is famed as the Basque Country’s gastronomic capital and, fortunately,  it is surrounded by world class food producers and produce from the land. 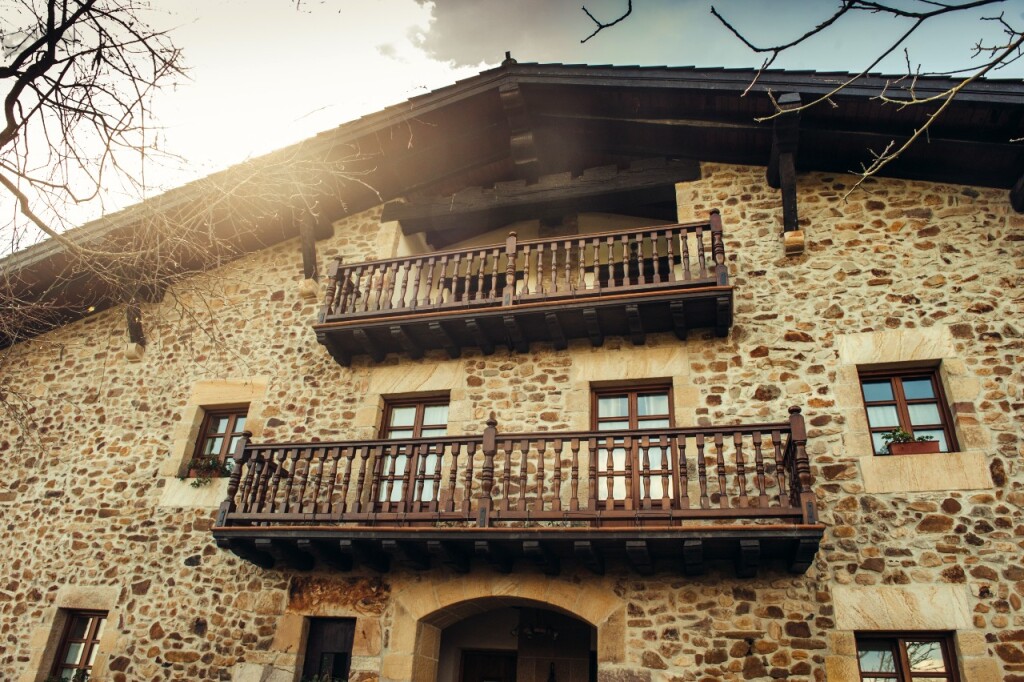 Apple cider production has a centuries old history in the Basque Country.  The drink was vital centuries ago when drinking water was not always safe.  It was also key in the history of the Basque whaling fishermen of the 16th and 17th century who carried it in huge barrels on their long fishing expeditions to Greenland and Newfoundland.  It was an important source of nourishment and being rich in vitamin C helped ward off scurvy.  Basque cider can be made from more than 100 varieties of apples with names like Goikoetxe, Moko, Txalaka, Gezamina and Urtebi.

Many of the Basque caserios or farmhouses got their design and form from being built to  house the enormous beam-presses used to crush apples and make cider. These magnificent, sturdy buildings are beautifully constructed of wood and stone. Nowadays many offer charming B&B style lodging. 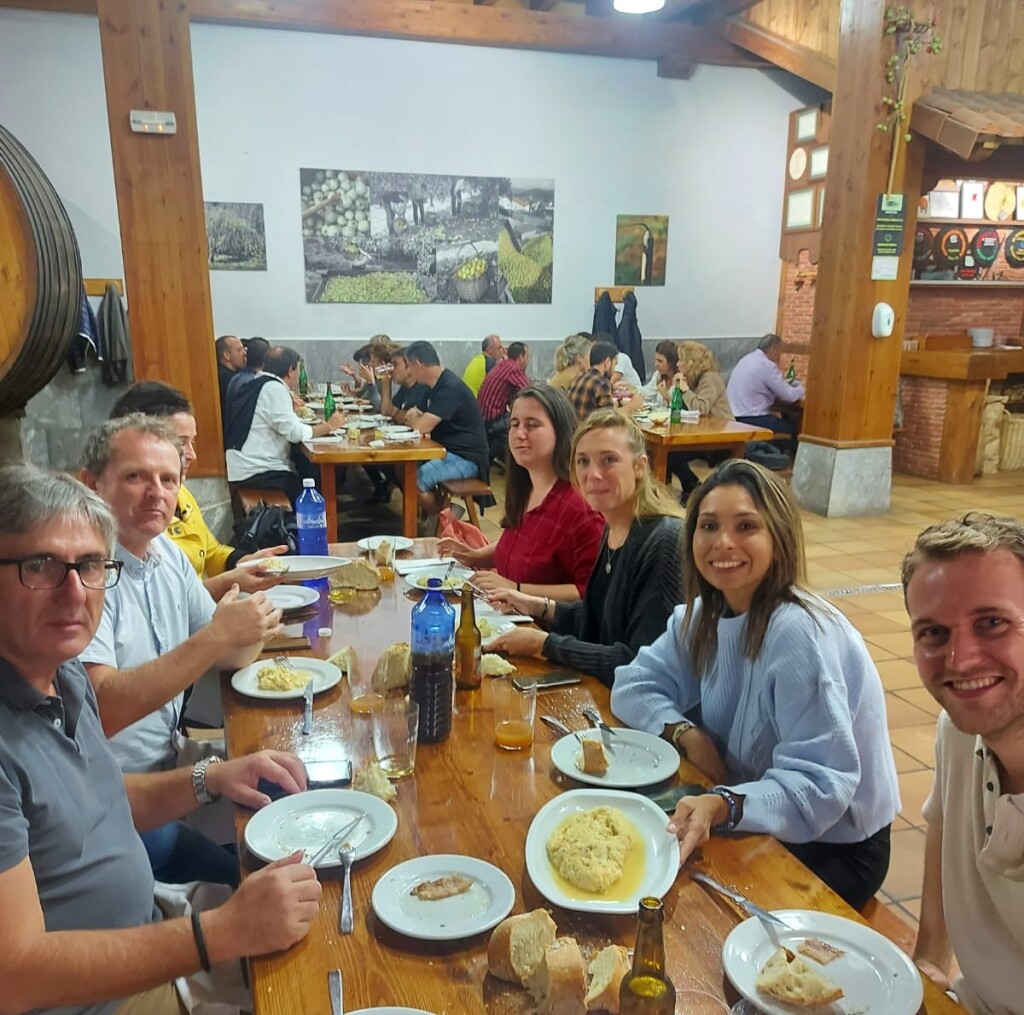 Dining in a Basque Cider house 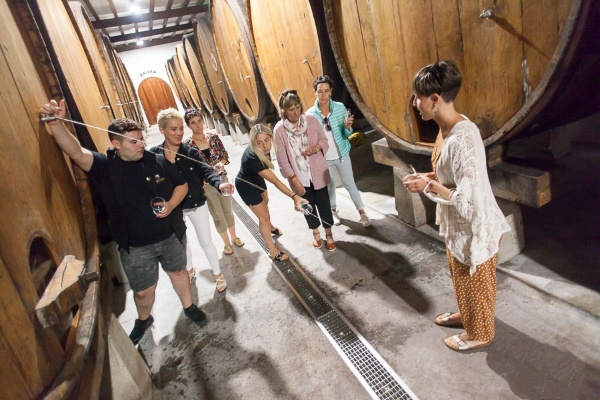 Serving Cider from the Cider Barrels

Of the many delights of dining in a sidreria is the ambiance of your surroundings, the familial atmosphere and of course the food.  It’s a great opportunity for the visitor to experience local life and mix with the Basque people.  Add to that the sheer fun of learning to catch sidra in your glass when it squirts from the huge barrels, and drinking it with some of the best charcoal grilled food you have had in your life, and you are on to a winner. 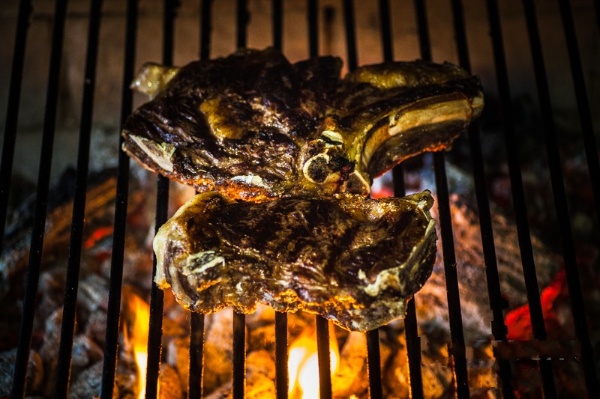 As Breanna Wilson wrote for Forbes in her article titled San Sebastian’s Best Kept Secret: Its Cider Houses “ But it’s the locals that you’ll find inside that really make visiting a cider house something that you have to do when you’re here. You’ll find yourself in the middle of a wedding party or a family dinner, standing in line between groomsmen, grandparents and even children to take over the pour from the txotx (pronounced /CHO-ch/) – the large wooden barrel that holds the cider – just like you’re part of the family.

And don’t worry, everyone is friendly here. And that’s the appeal. You truly feel welcomed.” 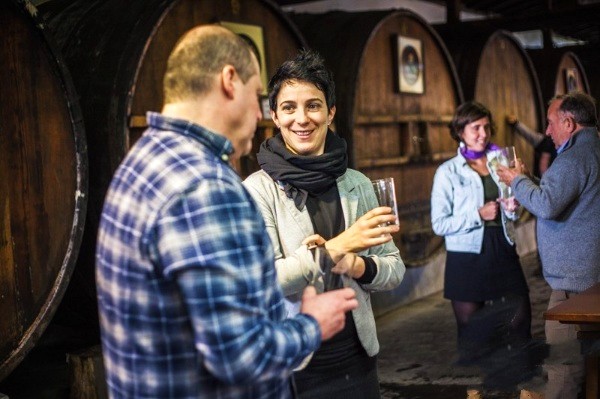 A typical Basque cider house menu would consist of  chorizo cooked in cider; cod omelet; roasted cod with green peppers; thick, medium-rare chuleta steak; Basque Idiazabal cheese  served with walnuts and apple jelly. And all the cider you can consume. The cider house custom is just one of many unique Basque cultural traditions that make this region a very different place than the rest of Spain.

Basque cider doesn’t often make it too far from the Basque Country as a large part of the production is drunk by locals.  The biggest sidreria producer in the Basque Country would produce about 2 million litres a year and 80% of that would be consumed locally and mainly during the high cider house season which runs from January to April – 3 months after apple harvest – when thousands descend on the cider houses at the weekends.

WHY BOTHER? I DON’T DRINK ALCOHOL

So, let me share with you that I don’t drink alcohol anymore.  Haven’t done for years.  That doesn’t take away in the least from the enjoyment of visiting Basque cider houses.  If you love to mix with locals and are drawn to finding out about different cultures, you will love it.  The same applies if architecture is your thing. 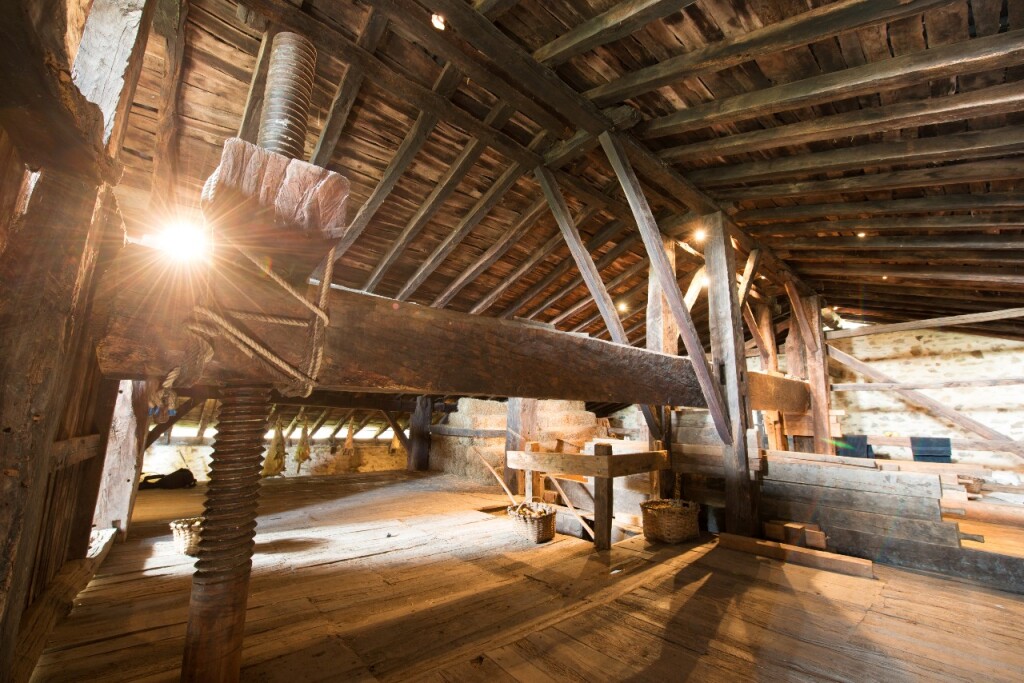 And the great outdoors, as well as cooking and experiencing new cuisines.  By the way,  pure 100% apple juice among other non-alcoholic drinks can be enjoyed at ciderhouses too.  And both vegetarian and vegan diets are catered for too at a number of Basque cider houses. 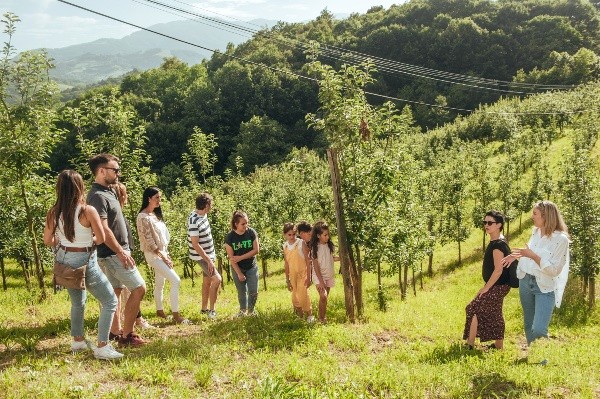 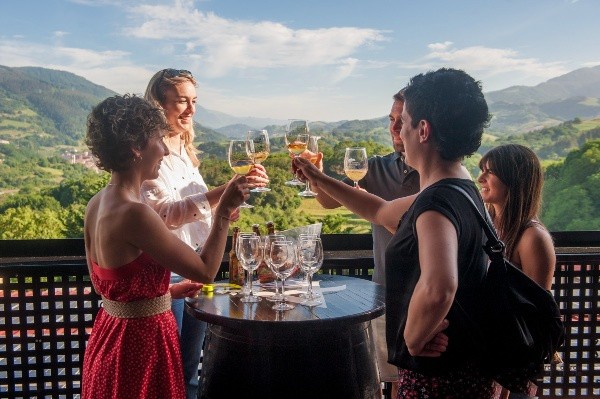 At Totally Spain we suggest visiting several Basque ciderhouses, each unique in its own way.  And combine this with visiting boutique cheeseries to meet the owners while seeing some of the most magnificent natural areas found in the Basque Country and close to San Sebastian. 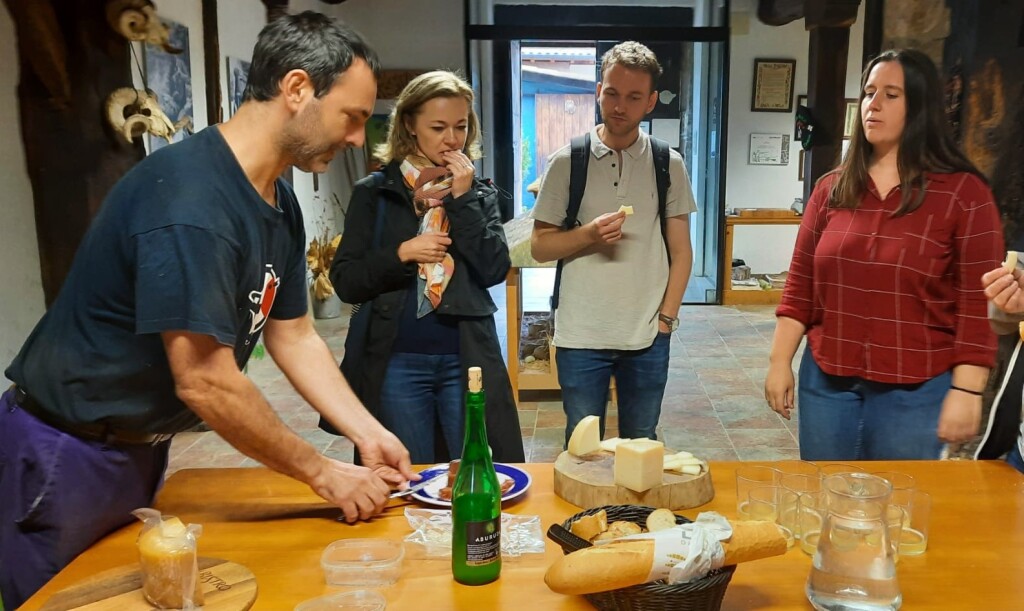 Totally Spain can plan for you the ideal private itinerary to discover the world of Basque cider, ciderhouse cuisine and the land and people that produce it and celebrate it.  All this as part of your custom trip to Spain where you will be accompanied by our charming expert Basque private driver-guide who will take you on a trip to remember.