Keen to explore Andalusia in Southern Spain from the comfort of our favourite Spanish hotel chain? This unique 10-night Self-Drive Southern Spain Parador Tour takes in the enchanting cities of Granada, Cordoba and Seville meaning you get to see the Alhambra, the Mezquita, the Giralda and the Plaza de España – as well as lesser-known UNESCO-listed locations such as Antequera (famous for its dolmens), Úbeda (achingly beautiful olive groves) plus the enchanting Sierras de Cazorla Nature Reserve.

Gastronomy is a key element in this Parador self-drive itinerary as you’ll enjoy the best gazpachos, grilled prawns, fish baked in salt, cured tuna called mojama, cured meats, wines, sherries and so much more. We’ll plan your itinerary so you can avoid the crowds and really experience and enjoy these incredible monuments, city squares and countryside vistas. This tour provides a terrific overview of the area and will no doubt leave you wanting to return for more. 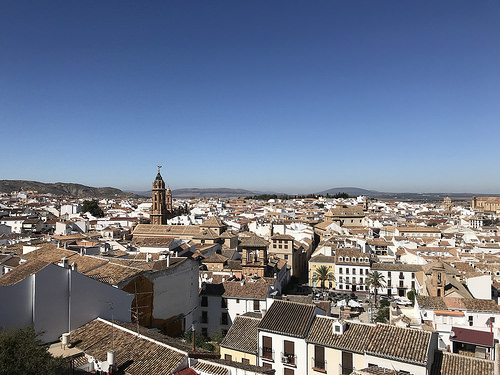 Pool-side at the modern Parador located in parkland within the city of Antequera. photo credit: Antequera Parador Paradores of Spain

Collect your car rental from Malaga International Airport or Malaga city and commence your southern Spain parador driving tour by motoring north to the Parador Antequera for 2 nights. (First time driving in Spain? See our 50 facts when driving in Spain here.) This is one of the modern paradores and we’ve selected it because it’s location in parkland inside the city centre is the perfect place for you to relax after your flight, soak up some sunshine, take a swim in the pool and when you’re ready – you can explore the dolmens, the Alcazaba fortress from Roman times and El Torcal nature reserve.

If you spent your youth reading Hemingway and you’re itching for the open road– you might want to drive over to Ronda. If you’d rather chill, you’ll have plenty time to check out the local tapas bars and order some traditional dishes such as ‘porra antequerana’. To learn more about tapas, read our guide to the unwritten rules of tapas in Spain here. 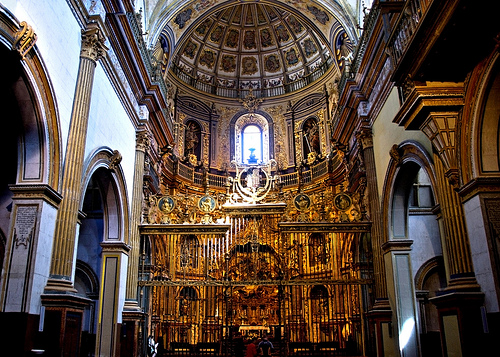 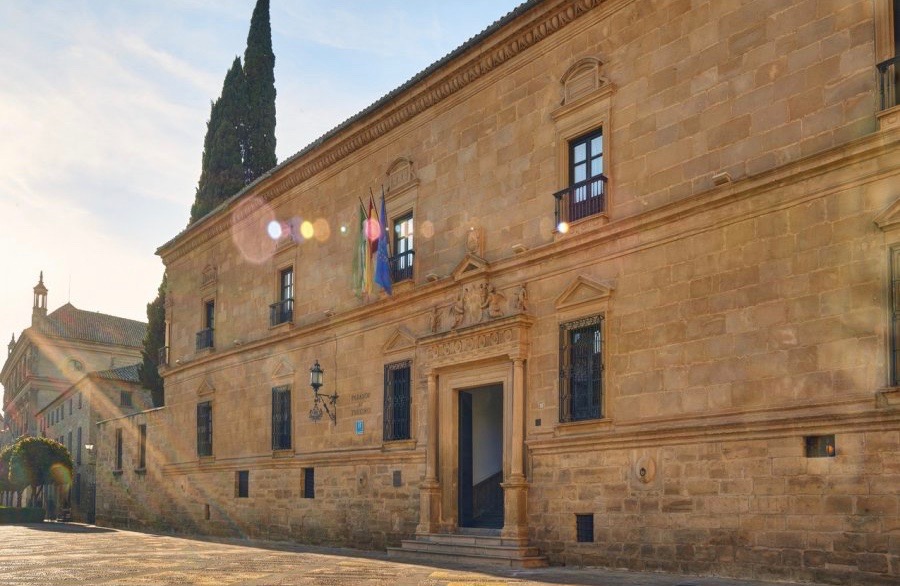 En-route to Úbeda, you might want to take a break in Jaen – which is a UNESCO-listed city famous for its olive oil, cathedral and Villardompardo Palace bathhouse and museums.

After your rest, continue on to Úbeda’s Parador, located in a 16th century former palace on the elegant Vázquez de Molina Square. You’ll want to start by enjoying the parador itself – the courtyards, cloisters and more. When it’s time to leave the grounds, check out the ceramic workshops on Valencia Street and visit Sacra Capilla del Salvador (chapel) and the Synagogue of Water. Although the city dates back to Arabian times, wherever you stroll around this UNESCO-listed city, you’ll get a real sense of the period of Andalusian Renaissance.

Don’t miss the views of the olive groves from the appropriately named Redonda de Miradores Street. Afterwards you might want to visit the Olive Oil Interpretation Centre where you can taste and purchase oils that you’ll never come across abroad.  When it’s time to eat, you should try the local goat and lamb dishes and make sure you apply the local olive oil liberally to everything. If dining at the Parador, ask for the olive oil ice-cream! 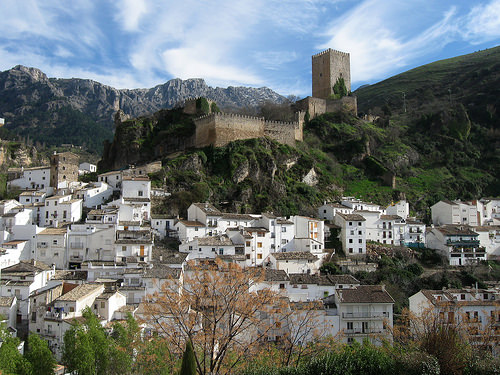 If you enjoy heights, you’ll be glad to know this Parador is 1,400 metres above sea-level! Just imagine the views! photo credit: Cazorla Parador Paradores of Spain

Drive through the rolling valleys of olive groves to get to the Parador of Cazorla located inside the Sierras de Cazorla Nature Reserve (about 30 mins drive from Cazorla itself).

When you get to this hunting-lodge styled hilltop hotel, relax, unwind and take in the views. You might wish to have lunch out on the terrace of the Parador restaurant (1,400 m above the sea) where you’ll find game such as wild boar and venison plus rabbit, trout and other locally sourced ingredients including figs, walnuts, quince, almonds and plums.

When you’re ready to take on the great outdoors – you’ll be happy to know that the nature park is perfect for walks, bike rides and even pony-trekking for the more adventurous. Lots of water sports are on offer such as fishing and canoeing too. There are dozens of signposted walks so you’ll find the perfect walk for you. If mobility is an issue, you can explore the park by car too. You can even book a 4-wheel drive guided tour to learn about the flora and fauna and find the best vantage points for photography.

Next day, you might wish to walk about Cazorla itself. Enjoy the view from Yedra castle (begun by the Almohads and finished by the Christians). NB There’s a small museum worth visiting at the top of Yedra castle that exhibits the arts and traditions of the Upper Guadalquivir. You should also visit the nearby Castillo La Iruela where you’ll find astonishing good views from the castle that’s perched on limestone cliffs. Tomorrow is a busy day so make sure to have an early night! 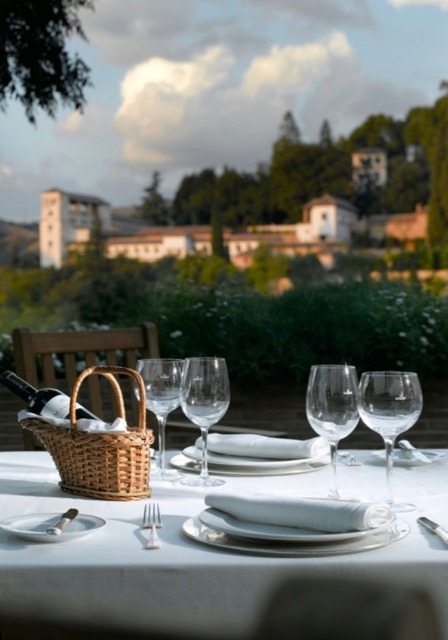 The unique views of the Generalife in Granada from your dining table at the Parador de Granada inside the Alhambra complex. photo credit: Granada Parador Paradores of Spain

Granada Parador is located inside the Alhambra and the Generalife complex – in a former monastery built on the orders of the Catholic Monarchs on the site of a Nasrid palace. photo credit: Granada Parador Paradores of Spain

Today you are going to be driving to one of Spain’s most special Parador hotels, which is located inside the Alhambra and the Generalife grounds. It’s a former monastery built on the orders of the Catholic Monarchs on the site of a Nasrid palace so you know it’ll be atmospheric and enchanting. After check-in, it’s time to visit the Alhambra – the complex of palaces built around courtyards of flowering trees, pools and fountains that is often hailed as the most exciting, sensual and romantic of all European monuments. Set on a wooded hill above the city of Granada, the Alhambra was built in the 14th century by the then sultans of Granada, rulers of the last Muslim kingdom in Al-Andalus. It reveals the brilliance and spirit of the Moorish culture in Andalusia at a time when the rest of Europe was only just beginning to emerge from the Dark Ages.We have pre-booked tickets for you – NB this is the busiest attraction in Spain so you’ll thank us for it when you get there. (You can read our guide to visiting the Alhambra here.)

After visiting the Alhambra, your Totally Spain guide will take you to the Albaicín neighbourhood (also UNESCO-listed) which is the largest still-inhabited Moorish quarter in Spain and the original site of an ancient Roman settlement. The guide will also show you the other highlights of the centre of Granada.

After returning to the Parador, we recommend dining on the terrace of the Parador restaurant which boasts amazing views of the Generalife! You’ll get to sample traditional fish and meat dishes with a mix of Moorish and Christian roots such as breua nazarí (a savory pie), monkfish in mozárabe sauce, Alpujarras-style kid goat and San Francisco Monastery cake – while you listen to a wonderful Spanish guitarist in the background. 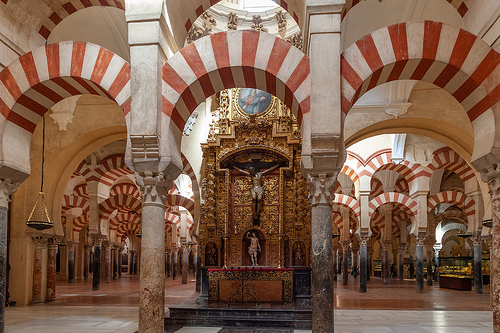 You really need to see Cordoba’s Mezquita to believe the combination of styles and beliefs! photo credit: Scalino The incredible mix of religions together via photopin (license)

The Parador of Cordoba is a modern build with wonderful views of the city, surrounded by a garden known as Los Naranjos photo credit: Cordoba Parador Paradores of Spain

Today continue your southern Spain parador tour by driving to the Parador of Cordoba, a modern building with magnificent views of the city, surrounded by a garden known as Los Naranjos (The Orange Trees), which boasts the oldest palm trees in Europe. After a dip in the pool, you’re ready to start exploring. All roads lead to the Mezquita which is a spell-bindingly beautiful cathedral built inside a mosque. We have pre-booked a half-day tour of Cordoba for you today which includes the Mezquita, the courtyards and the former Jewish synagogue. (Read up more about this and other Jewish heritage sights in Spain here…)

That evening, relax with the scent of the oranges in the Patio de los Naranjos, stroll around Plaza de la Corredera and Cordoba’s many other charming squares. Over your evening meal, make sure to try local specialities such as gazpacho blanco, salmorejo, migas and more…

After your overnight rest, we recommend rising early to see some of Cordoba’s courtyards filled with blossoming terracotta pots (especially during the month of May). The best location to see this tradition is inside the 14th century Viana Palace which boasts no less than 12 courtyards! After lunch in one of the many plazas around Cordoba, take a stroll across the Roman bridge – another iconic element of the city. Enjoy a meal at the Parador on your second night. 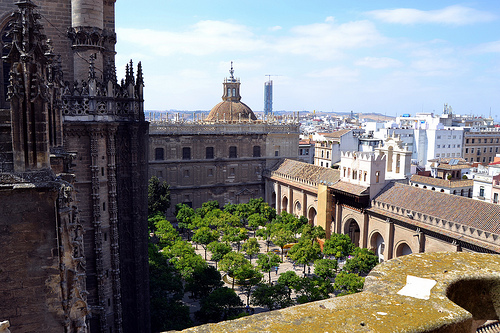 Drive to Seville to your four-star centrally-located hotel (the only non-Parador hotel on  this tour). This is your last night and if it’s your first time in Seville, you’ll want to pack in quite a bit – starting with the Alcazar, Giralda and Plaza de España (all even busier than usual following the filming of the HBO series Game of Thrones there).

The 9th century Alcazar is the oldest active royal palace and gardens in Europe and your camera is going to fall in love with what you find here. It’s conveniently close to Seville’s cathedal and Giralda tower which is another must-see in Seville. The cathedral was built on the site of a former mosque, making it the largest Gothic cathedral in the world. It’s also the burial site of Christopher Colombus who docked here on his return from the Americas and put this city on the international trading map. Make sure to climb the Giralda bell tower where the views of the city are wonderful and as you exit, visit the Patio de los Naranjos (Orange Courtyard). Walk by the Royal Tobacco Factory – the setting for Bizet’s Carmen – on your way to Seville’s best park – the Maria Luisa – alongside which you will find the beautiful Plaza de España with its elegant bridges and blue ceramic tiles – another key sight here in Seville.

Leave time for a stroll around Barrio Santa Cruz which was the old Jewish quarter in Seville. Shoppers should explore Calle Sierpes for traditional Spanish items such as fans, ceramics and leather goods. Anybody with a little girl in their life should pick up a feria-inspired flamenco dress or the flamenco shoes and castanets. This evening you have tickets to a special live flamenco performance, which you’ll thoroughly enjoy.

After a night’s rest, it’s time to drop your car off at Seville International Airport and board your flight home. Buen viaje and we hope it’s just the first of many trips with us. We pride ourselves in repeat custom and hope you will be no different! [NB You might be tempted to follow up with our Northern Spain Parador tour here]

Tempted to take this Southern Spain Parador tour or maybe something similar?

Totally Spain will take care of everything on the ground for you as well as pre-booking some top sights. We’ll arrange your car rental too and provide you with comprehensive documentation so that you make the very most out of your time in Andalusia.

Trip Price: from 1,785 euros per person sharing, which includes:-