One of the powerful draws to visiting the Northern coast of Spain are the Cantabria cave paintings. Being based here in Cantabria, they are literally on our doorstep and we love visiting them and include them in our Northern Spain itineraries. Everybody who visits is moved by the experience. And yes – almost everybody agrees that the paintings constitute the oldest art in Europe.

1 Why do so many people travel to Cantabria for the cave paintings?

Cave art has been discovered at 41 different sites here and six of the ten UNESCO-listed caves containing art are open to the public.

2 Why is the cave art in Cantabria so significant?

New dating techniques have put the spotlight on Cantabrian caves. Up until recently man or homo sapiens was believed to have introduced drawing to the world. However research led by archaeologist Alastair Pike from the University of Bristol in England has dated one of the Cantabrian caves – El Castillo – back more than 40,000 years. Read about the debate in this article from the National Geographic. If correct, it makes El Castillo’s cave art the oldest in Europe and opens the possibility that the Neanderthals were more visually creative than imagined before.

3 What examples of cave art can you find in Cantabria?

To give you a little context, man first arrived in northern Spain around 35,000 BP (before present) – and co-habited with the last of the Neanderthals who survived longer than elsewhere in Europe – until 28,000 years ago approx. The Upper Paleolithic culture emerged from the period 30,000 to 25,000 and up until recent research was presented – it was regarded as the beginning of cave painting. Cantabria has many examples of cave art from the last Ice Age (ending 18,000 BP) including Altamira (the cave itself has limited entry  – the replica beside the original cave is open to visitors), El Castillo, El Pendo and Chufin. However, the pinnacle of creativity – the Magdalenian phase – was at the end of the Ice Age from 17,000 to 13,000 BP. This is the busiest period for art decoration – which can be best experienced at the Altamira and El Castillo. From 13,000 to 10,000 BP, climate change led to a change in habitat and therefore a decline in cave art. Las Monedas offers an example of late cave art.

4 Is it possible to visit El Castillo cave?

Yes. You can actually visit El Castillo cave and right after visit another cave called Las Monedas in Puente Viesgo in Cantabria. These two caves are just 675m apart. You’ll need to leave a gap of at least an hour between the end of one visit and the beginning of the next. (Times change frequently so please check the links we provide for opening times. NB The guided visit is limited to 13-15 people are any one time. Booking recommended. Each visit takes 45 mins and costs 3EUR.

El Castillo was discovered in 1903. From the site, it has been possible to determine how homo neanderthal and homo sapiens lived, fought, hunted and dressed themselves. The cave visit covers about 275m and contains 225 animal figures including animals such as horses, bison, stags, goats and mammoths, and another 50 references to the human figure. It is dated back as far as 40,800 years ago.

Las Monedas cave takes its name from the 20 coins that were sealed in a cave by a missionary in the 16th century. The visit goes 160 metres into the 800m cave. The cave art (17 animal figures including reindeer, goats, bison, a bear and horses) is located quite close to the entrance. It is dated to 10,000 BC.

5 Is it possible to visit The Caves of Altamira?

The answer is yes, and no. The Altamira cave near Santillana del Mar is opened on a very limited basis but there is a replica cave open to the public right beside the original.

The original Altamira cave – the Sistine Chapel of Pre-history – was discovered in 1879 by Marcelino Sanz de Sautuola and his daughter Maria. It wasn’t until 1902 that its authenticity was declared – such was the craftsmanship of the paintings. It has been described by the World Heritage Convention as offering “masterpieces of creative genius and humanity’s earliest accomplished art”. It was closed to the public for conservation reasons since 2001 when the replica was built but since 2014 very limited numbers are being re-admitted with a lottery system put in place for visitors every Friday morning. The 3D replica is located right beside the original site. Observe the standard of the cave paintings in this video:

6 What other caves are worth visiting?

We recommend El Pendo cave (Barrio El Churi, Escobedo de Camargo) that was discovered in 1878 by Marcelino Sanz de Sautuola (who also discovered the Altamira cave paintings with some help from his daughter), this cave offers an insight into the social activities of the time. The frieze painting discovered in 1997 is a 25m long panel containing 20 figures in red including 12 hind and a goat. Dots, discs and lines are also present. The frieze is estimated to date back to 20,000 BC. Please check the website for opening hours. A maximum of 20 people per visit. Booking is recommended. The guided visit takes 45 mins and costs 3EUR. This cave is just 17km from El Castillo cave in Puente Viesgo.

We also suggest seeing Hornos de la Pena cave (Tarriba, San Felices de Buelna). Discovered in 1903, the cave housed Neanderthals and homo sapiens and more recently served as a refuge during the Spanish Civil War. The greatest works are accessed by a low passage into which you see the most complete set of engravings in Cantabria including a stag, bison, goat, birds, a serpent like animal, and an anthropomorph (animal-human figure). It is suggested that the art here dates from two separate periods – the figures made by abrasion date back 18,000 years and the rest to 13,000 BC. Pre-booking is essential as only 4 people can be admitted per visit. It takes 45mins and costs 3EUR. Check website for more details. This cave is just 10km from El Castillo cave in Puente Viesgo.

And in Eastern Cantabria, you can visit Covalanas cave (Monte Pando, Ramales de la Victoria, Cantabria). This small cave contains two galleries – one of which contains vibrant red cave paintings. A series of dots (made by finger) leads the eye to the 18 hind including a stag and a horse located 65m from the entrance. The dots continue and more figures follow. At 90m from the entrance the figures end and geometrical lines and dots are visible. The paintings are dated to 10,000 BC. Check website for opening times. The guided visit takes 45 mins and costs 3EUR. The maximum admittance per visit is just 7/8 people depending on the time of year. Booking is recommended.

You can also visit the nearby Cullalvera Cave but allow two hours between the entrance time for one cave and the next. This cave is 70km east of the El Castillo cave in Puente Viesgo. After visiting the cave/s, visit one of the charming coastal towns such as Santona  – famous for its anchovies.

And in western Cantabria, you can visit El Chufin cave (Riciones, Rionansa, Cantabria). Engraved figures on rock and a female figure, possible genital representations and a series of dots are visible in this cave. Please be aware that the surroundings have been altered by the construction of a reservoir by the site. Access to the cave is sometime reached by boat. Please check the cave website for details. A maximum of 6 people are allowed entry per visit. The guided visit takes 90 mins and costs 15EUR. This cave is 64km west of the El Castillo cave in Puente Viesgo. You could combine this with a visit to El Soplao cave (below) – that is famous for its geological formations.

And consider a visit to El Soplao – the geological wonder (Celis/Rionansa, Cantabria). Although there isn’t any cave art, no Cantabrian caving holiday is complete without a visit to ‘El Soplao’ to see over 20km of geological formations, and explore the cave that has been mined for blende and galena used for obtaining zinc and lead. Research is being carried out here into new insect species discovered as fossils in amber within the cave. Get a feel for the visit in the video here. Check website for opening times. Entrance costs 12EUR. This cave is 53km west of El Castillo – very close to the Chufin cave – see above.

7 Looking for more context and images on the Cantabria cave paintings and the region?

Watch the curator Jill Cook, from the British Museum, speak about an exhibition entitled Art in the Age of Altamira at the Botin Foundation in Santander here. Don’t forget if you want to extend your stay in Northern Spain, there are some great caves also in neighbouring Asturias and the Basque Country. Read our guide to Northern Spain to get a sense of what else you can do in this region and see our post on 21 Images that Define Cantabria. And check out our suggested 6-night Caves of Cantabria Tour which we can customise for you. 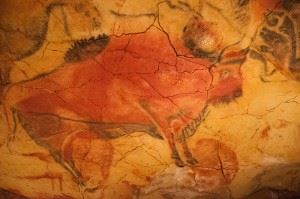