We meet some interesting people in our line of business and we’ve asked a few of these colourful characters to guestblog for us over the coming months. First in the gallows is Galician-based writer and pig-lover John Barlow who tells us about his adopted hometown – A Coruña in Galicia. Thanks John! It’s always a pleasure to read your work… 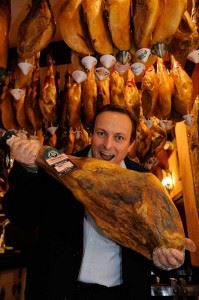 What to See in A Coruña

“Located on the north-western tip of the Spanish Peninsular, so far away from the golden sands of the Costa del Sol that, as the crow flies, A Coruña is as close to Cornwall as it is to Marbella. I’ve lived here for a decade, and over that time I’ve seen its profile grow as a place to visit, especially for British tourists. There are several reasons for this, not least the airport, which now has a direct daily flight to London Heathrow that takes a little more than a hour, so it’s a perfect city break for anyone living or travelling through the south west of England.

A Coruña has also become a regular stop-off for cruise liners, with thousands of visitors disembarking at the city-centre dock every week. The reasons for Coruña’s growing reputation as a place to spend a happy day or two are not hard to find. Built on a crooked, bulging finger of land that juts out into the Atlantic, the city’s main attractions are packed in and around the old town, which is situated – if you will – on the middle knuckle of the finger. At one point there’s only about three blocks between the sea on either side.

A Coruña is in Galicia – traditionally the poor, wet, and cold agricultural corner of Spain. The region is still pretty poor, wet, cold and agricultural nowadays, although not Coruña, which has always been a professional centre, and likes to think if itself as a cut above. To call it bourgeois is not far from the mark, although, like most things in Galicia, there’s a certain modesty and understatement in how they do bourgeois here: there are plenty of Mercs, but they park them as if they were tractors.” 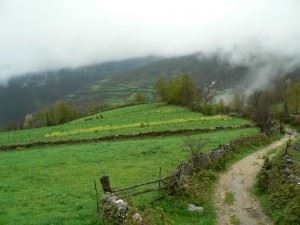 This is how many outsiders see Galicia 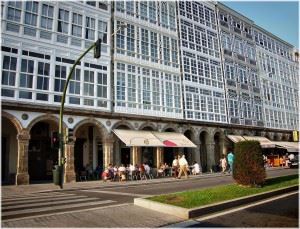 And this is Coruña. It’s affectionately known as the Crystal City because of its traditional glass-fronted galleries. Photo credit: jl.cernadas via photopin cc

“Bourgeois or not, there’s nothing understated about how Coruñans eat. Galicia is blessed with a meandering, estuary-strewn Atlantic coastline, perfect for seafood. It also has Spain’s largest fishing fleet. A few years back I was working as a translator for Rick Stein during the filming of his BBC series about unknown Spain, and when we took him to the fish market at the heart of Coruña, he was speechless (The Times newspaper once called this market one of the seven wonders of the culinary world). Galicians are nuts for fish and seafood, so if you do come, have fish. It’ll be fresh; Galicians can tell frozen in an instant.” 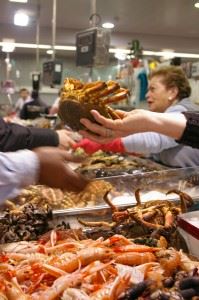 The Plaza de Lugo Fish market in Coruña has been open for business since 1910. Photo credit: gaelx via photopin cc 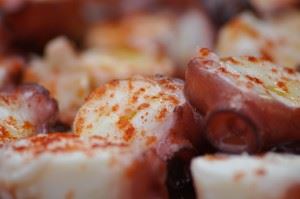 Pulpo or octopus is one of the more popular dishes in these parts. Photo credit: Fran Villena (villano) via photopin cc

“Apart from the fish, there’s all the other edibles. Head for the area known as ‘Los Vinos’ (the wine streets), a series of old narrow lanes leading up to the town hall, and full of tapas bars. A particular feature of casual eating here, especially seafood, is to order several ‘raciones’ or portions and share them. If you do this, try and ask a local where to go; the best places are often the least showy. Spider crab (centolla) is always quite expensive, but if you like crab this is where you should have it. Even Rick Stein and his crew agreed that it was the best they’d ever tasted. 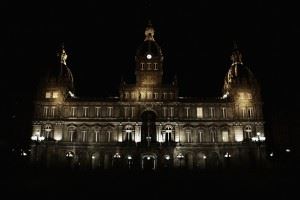 This is the Town Hall or Ayuntamiento – your landmark for ‘Los Vinos’ or Wine Streets which are great for tapas. Photo credit: Angelo González via photopin cc

Barge your way in to several bars, arms high in the air, smiling and mouthing the word ‘perdona’ as you carefully shove people out of your way. Then shout your order at the bartenders, who will pass the stuff over people’s heads to you on impossible to hold paper plates.

Finally–which in Spain means ‘around four in the morning’–make your way to Filloa Jazz, a dark, basement jazz bar that’s been here forever, and let yourself down gently with some Ella Fitzgerald, before you eventually make your way back to the hotel, which, because everything’s packed onto a couple of knuckles’ worth of space, will only be a few blocks away.” 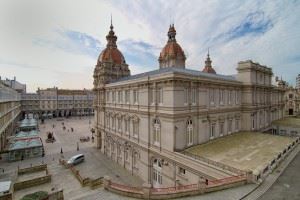 “I guess there exists the possibility that you might want to do something other than eat and listen to jazz whilst you’re here. So here are, in no particular order, are few more suggestions: 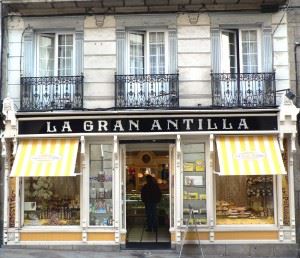 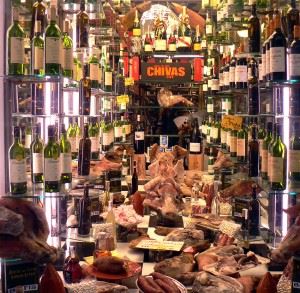 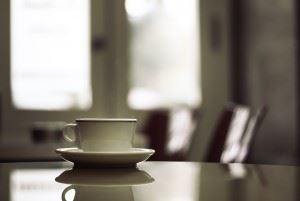 If there’s one thing that perfectly captures life in Coruña, it’s this: a cup of coffee. Coruña is, quite simply, a lovely place to be. Relaxed, restrained, good-natured. Photo credit: Angelo González via photopin cc

John Barlow’s food-based travelogue about Galicia, Everything But the Squeal is available as a paperback (ISBN-13: 978-1840247404) and also as an ebook for Kindle (Amazon UK). There is also a Flickr page to accompany the book. For more information about John’s other books including his John Ray LS9 crime series, see his Amazon page, or his website.