Here at Totally Spain we prepare hundreds of custom self-drive holidays around Spain every year and some of our clients even choose to tour in their own vintage or classic car. When we put together any package for car enthusiasts, we suggest a trip to one of the car museums in Spain which are so well put together that they are interesting even for those who aren’t diehard fan of old cars. 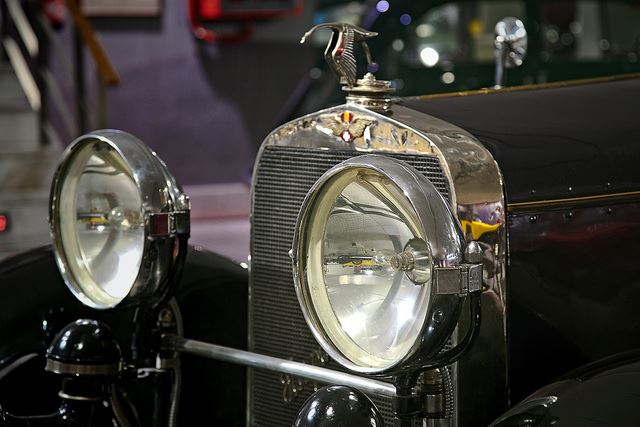 A Hispano-Suiza complete with stork at the Museum Of Automobile History, Salamanca. Photo credit: Tomás Fano via photopin cc

Which vintage cars are the must-sees in Spain?

The four must-sees for any car enthusiast are the regal Hispano-Suiza, the seductive Pegaso, the iconic Seat 600 and the officials’ favourite, Barreiros.

1 Hispano-Suiza
The Barcelona-founded Hispano-Suiza dates back to 1904. The technical director Marc Birkigt was a Swiss engineer – hence the name. These were luxury vehicles driven by royalty, aristocrats, chiefs of commerce and movie-stars. The world’s first true sports car, the Alfonso XIII, was named after one of Hispano’s biggest fans and clients, King Alfonso XIII. Birkigt transferred his engine skills to airplanes during the First World War, and the use of the stork as the Hispano mascot statuette date from this period. A truly stunning brand. We challenge you to take a bad photo of one of these vehicles! 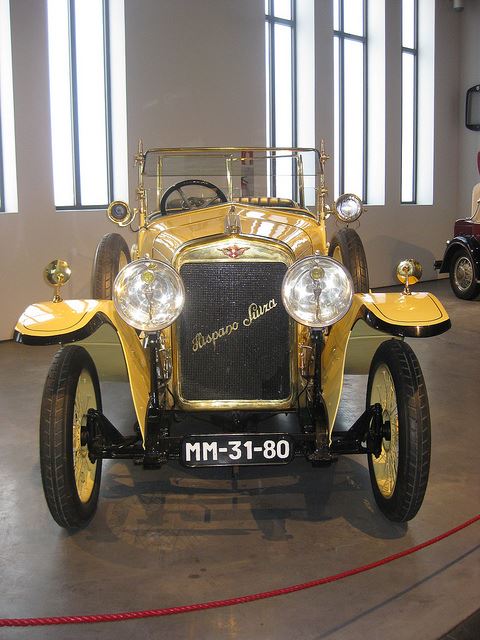 2 Pegaso
Pegaso started out life in an old Hispano-Suiza factory. Its name is derived from the winged horse of Greek mythology, Pegasus. Primarily a heavy vehicle manufacturer, it produced a limited number of sportscars in the 1950s. Its lead engineer Wilfredo Ricart came to the company from Alfa Romeo. Although it succeeded in drawing the attention of the international circuit, it was unlucky in its early racing career and funding quickly dried up for the project. Exact numbers vary from source to source but somewhere between 50 and 150 were made so it’s one of the most rare of the Spanish built cars. You’ll see them cropping up at auctions from time to time. 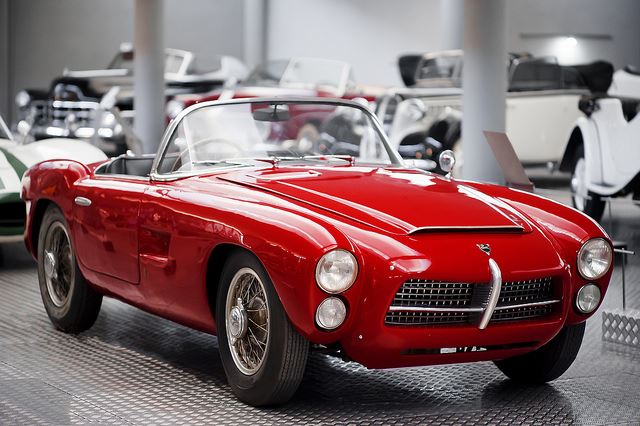 The Pegaso on show at the car museum in Salamanca. Photo credit: Txanoduna via photopin cc

3 The Seat 600
The Seat 600 was an icon of its era – produced from 1957-1973. It was the first reasonably priced car in Spain, making it attractive to many Spanish families. Almost 800,000 were built in the Zona Franca plant in Barcelona – which is still producing Seats today. You’ll see it at many of the classic car museums in Spain and on the road at car rallies. Being rather slight in stature, it lends itself to challenges and competitions, rather like the Mini, and we came across a hilarious video in Spanish of 20 adults somehow or other squashing inside and driving around a TV studio. 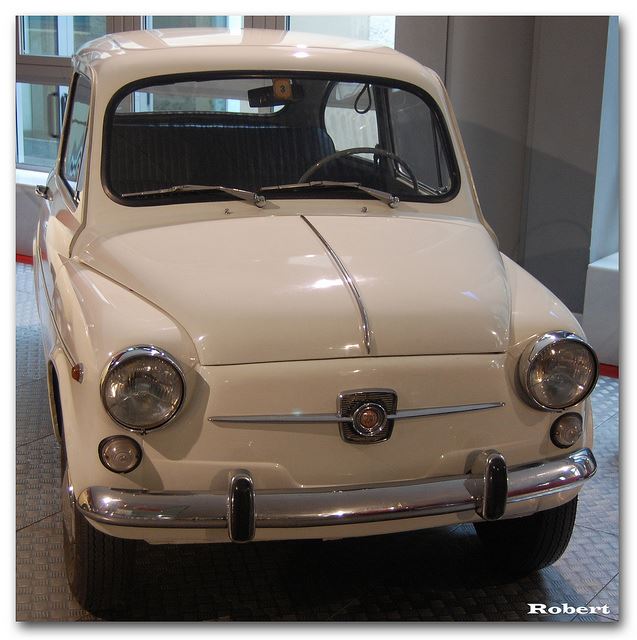 The iconic Seat 600 which you can spot at car rallies around the country and at the car museum in Salamanca. Photo credit: .Robert. via photopin cc

4 Barreiros
Rather like the Pegaso manufacturer, Barreiros, was another heavy vehicle producer, with bases in Madrid and Galicia. It produced the Barreiros Dart from 1963-1977 which was based on the Chrysler Dodge Dart. It’s a cult classic that lacks the curves of the Pegaso or the elegance of the Hispano Suiza – but it was an extremely popular car in Spain especially within senior levels of the administration. One such passenger – Franco’s confidante Carrero Blanco was travelling in his Dart when he was assassinated in 1973 and this vehicle can be seen at the Spanish Army museum in Toledo. You can also visit the Eduardo Barreiros Foundation museum NW of Madrid in Valdemorillo – prior arrangement necessary. 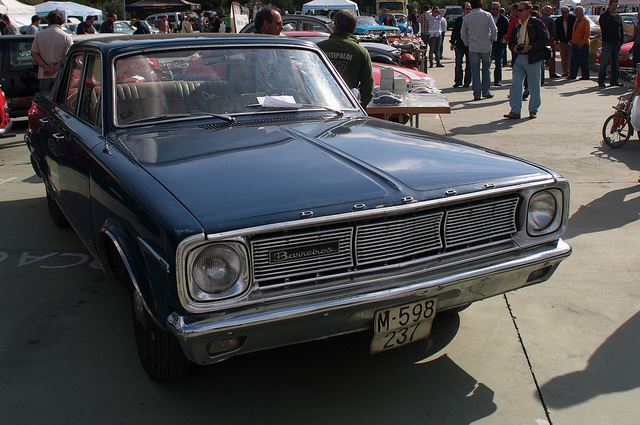 The Barreiros Dart crops up at car rallies and open days such as this one in Guadalajara as well as in museums. Photo credit: M.Peinado via photopin cc

The best places to catch a glimpse of these motors is at a car museum. Salamanca and Malaga are the biggest and best known but there are a few more as you’ll see below:-

Inside the old tobacco factory (which is interesting in its own right) you’ll find a well presented display of over 90 cars, plus temporary exhibitions and side exhibitions including period clothing and hats and other accessories. Great sculptures and light fitting made from car parts. This is a wonderful space for any car aficionado but also for accompanying family members. Technical descriptions of the cars are in Spanish and English which is great. And each vehicle display includes a period-dressed mannequin. Many of the vehicles present period pieces such as luggage, golf equipment or luggage on the outside, plus decanters etc. inside. The theming of the exhibition (Belle Epoque, Art Deco) means you get a sense of the art and design scene when each vehicle was on the road. We loved the 1920s Hispano Suiza. A great museum when you need a break from the pool or the beach in Malaga. Free parking in the museum which is a bus ride from the centre if you are car-free. Closed Mondays. 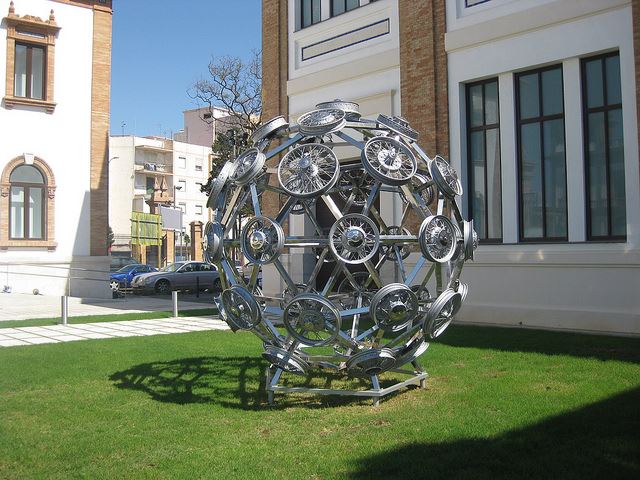 One of the many sculptures made from carparts at the Automobile Museum in Malaga – located in the old tobacco factory. Photo credit: Carlos Cesar Alvarez via photopin cc

This was the first of the car museums in Spain to open to the public back in 2002. It focuses on the technical development of car design and features many early car models, motorbikes and a city fire-engine from the 1930s. But it’s not just the early workhorses you’ll find. Among the more than 90 cars on permanent display with temporary exhibitions drawing on the 200+ vehicles in the collection, you’ll find the glamour of the Pegaso and a few Hispano Suizas here. You’ll also find a stunning display of miniatures. Great temporary exhibitions as well. The historical references to many of the vehicles are mind-boggling as many of the previous owners were the cream of Spanish society. An interesting space for any visitor to Salamanca. The museum is located by the Rio Tormes – walkable from the city centre. Closed Mondays. 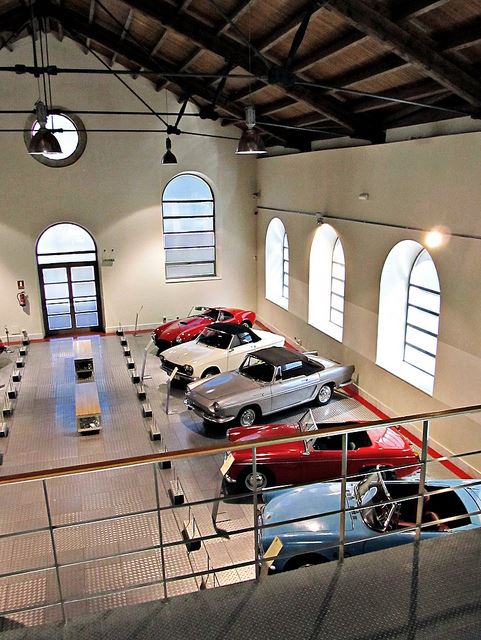 One of the many exhibition areas in the Museum of Automobile History, Salamanca. Photo credit: darioalvarez via photopin cc

3 The Torre Loizaga Museum in Galdames

Featuring the the biggest private collection of Rolls Royce in Europe – 75 cars including 45 Rolls Royces on the grounds of a stunning tower, west of Bilbao. Visitors can enjoy a journey through almost one hundred years of history, from the oldest model, the Silver Ghost of 1910, to a Silver Spur of the 1990s.  Furthermore, Torre Loizaga is one of the few places in the world where all the models of the Phantom series, manufactured up to 1972, can be seen together. Often a stop-off on rallies and location for enthusiast club days out in the North of Spain. Open Sundays and public holidays only. Other days by prior arrangement. In Galdames. 30km from Bilbao. 95km from Santander. 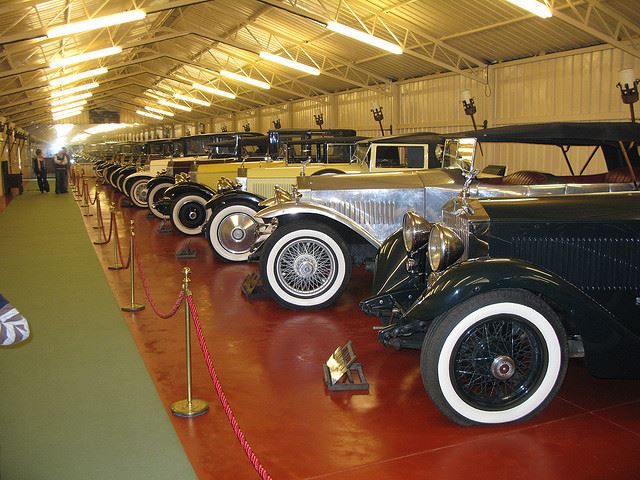 If you like your Rolls Royce, and are near the Basque Country, Torre Loizaga is the place to be. Photo credit: agirregabiria via photopin cc

RACE is a Spanish car insurance and roadside assistance company. Its museum is free of charge but you must arrange your visit in advance. Expect to see a Hispano Suiza from 1907 plus a range of other national and imported classics. Open Monday to Friday from 10am-2pm. Closed for the month of August. Located in San Sebastian de los Reyes in the region of Madrid (27km north of the city centre).

5 Travel Back in Time Car Museum in Downtown Madrid

If you must see a Hispano Suiza and you are in downtown Madrid, you should pop by the Sabatini Gardens near the Royal Palace. A family-run aparthotel business has put its family’s 22 classic cars and bikes on display in its basement. The exhibition is called Travel Back in Time. 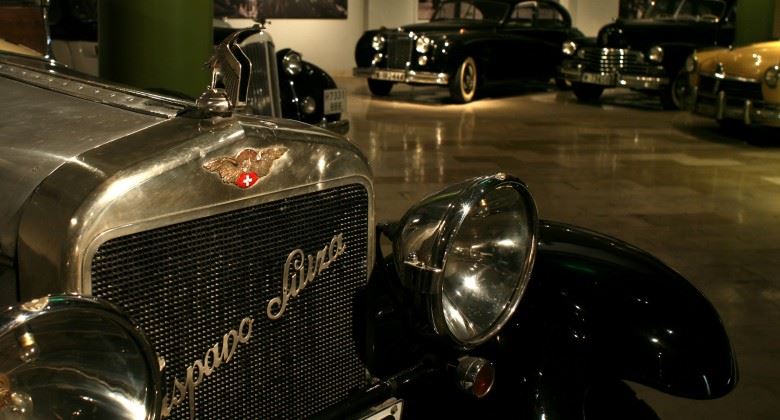 Inside the Travel Back in Time exhibition near the Royal Palace in Madrid. Photo credit: http://www.jardinesdesabatini.com

Just 54km from Merida, Spain’s newest car museum is home to 200 cars, 25 motorbikes, 10 tractors and a number of trucks also. Mainly imports from the US, UK and Argentina, it’s an interesting collection that has just been opened to the public. Located beside the train station.  Check the museum for opening times. 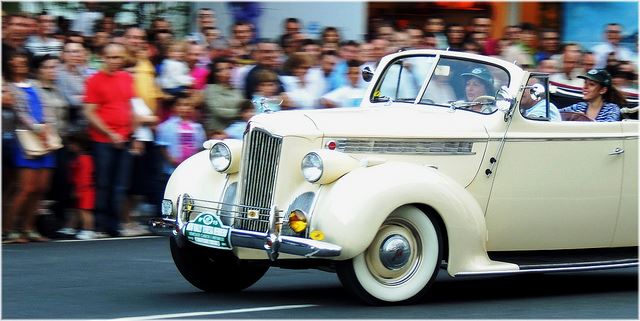 One of the many car rallies taking place in Spain. Photo credit: jl.cernadas via photopin cc

Though not one of the car museums in Spain, it might as well be.  The 4 star Hotel Dome Madrid located in the Las Tablas area of Madrid has a terrific, permanent collection of luxury, classic cars on display throughout the hotel that are free to inspect up close.  Not an ideal location for touring Madrid city centre but car enthusiasts may like to take a trip by metro or taxi to check out the collection.

Pro-Tip: Get in touch with us if you are planning a unique driving holiday here as there are other private car museums in Spain and cultural foundations with classic cars on show. We can also find out about the regional rallies and open days arranged by the regional vintage car clubs across the country as well as the international rallies for Spanish and non-Spanish marques that take place in Spain. Some of the car museums in Spain even allow you to drive some of the models so let us know if that’s something you’d like to do. You might also want to check out our Driving in Spain & Portugal guide, plus our Most Spectacular Driving Routes in Spain post, and our Camino de Santiago Driving Routes guide also.