Spurred on by the re-opening of the vertigo-inducing Caminito del Rey walking route complete with bridge, we’ve decided here at Totally Spain to pull together our favourite Spanish ‘puentes’ or bridges in Spain. We’ve got a bit of everything in here – Roman bridges, foot bridges, hanging bridges, toll bridges, bridges designed by starchitects and bridges that just have great personality or meaning. Some we’ve crossed this year – others we’re not sure we’ll ever cross (would that be the Caminito??) but they are all spectacular in their own special way. 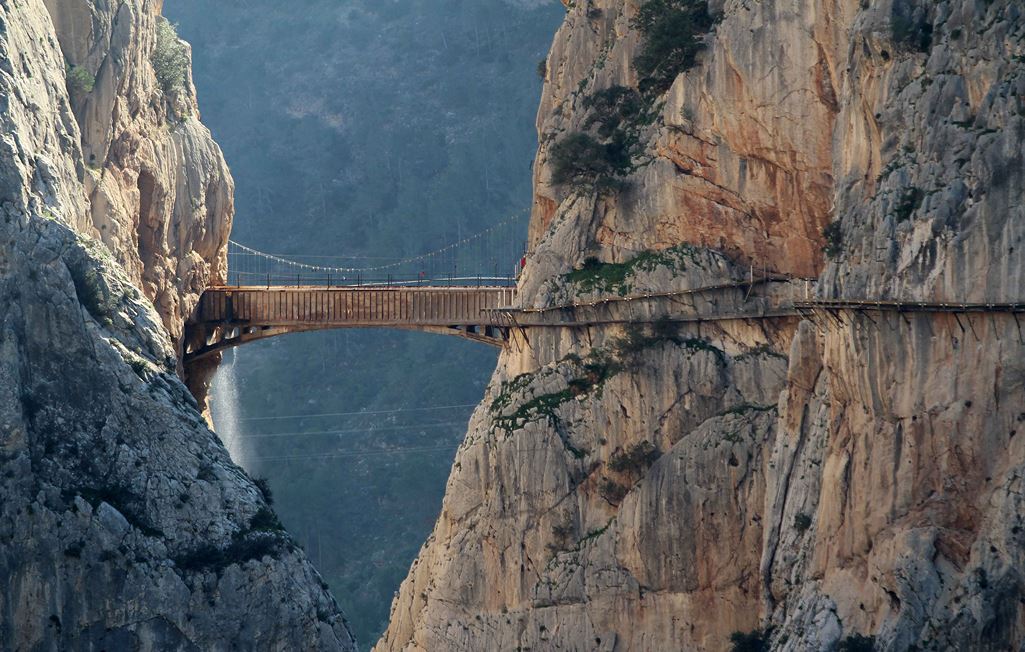 This ‘Little Way of the King’ re-opened to the public on 28 March 2015. You can see a great video about the re-building of the route here. It’s located on the Guadalhorce river gorge near El Chorro in Málaga. The bridge is the most photographed section of the 7km walk that dangles 105m above the ground in sections. The walkway including the bridge was initially constructed by a hydroelectric firm. It took 4 years to complete and was finished in 1905 but was only officially opened when King Alfonso XIII crossed the bridge in 1921. It’s been officially closed to the public for the past 15 years but that hasn’t stopped a few daredevils accessing the route. The brand new wooden platform complete with safety cable has been keenly received. A maximum of 600 people can walk the route daily and the allocation for the first 3 months was snapped up very quickly and we’re sure the next round will go just as fast. For reasons of safety under 8’s are not allowed on this pathway which is not accessible for wheelchairs either. It takes approximately 4 or 5 hours to walk. If you are interested in walking this route, we recommend this very thorough and beautiful online publication produced by the Diario Sur newspaper. 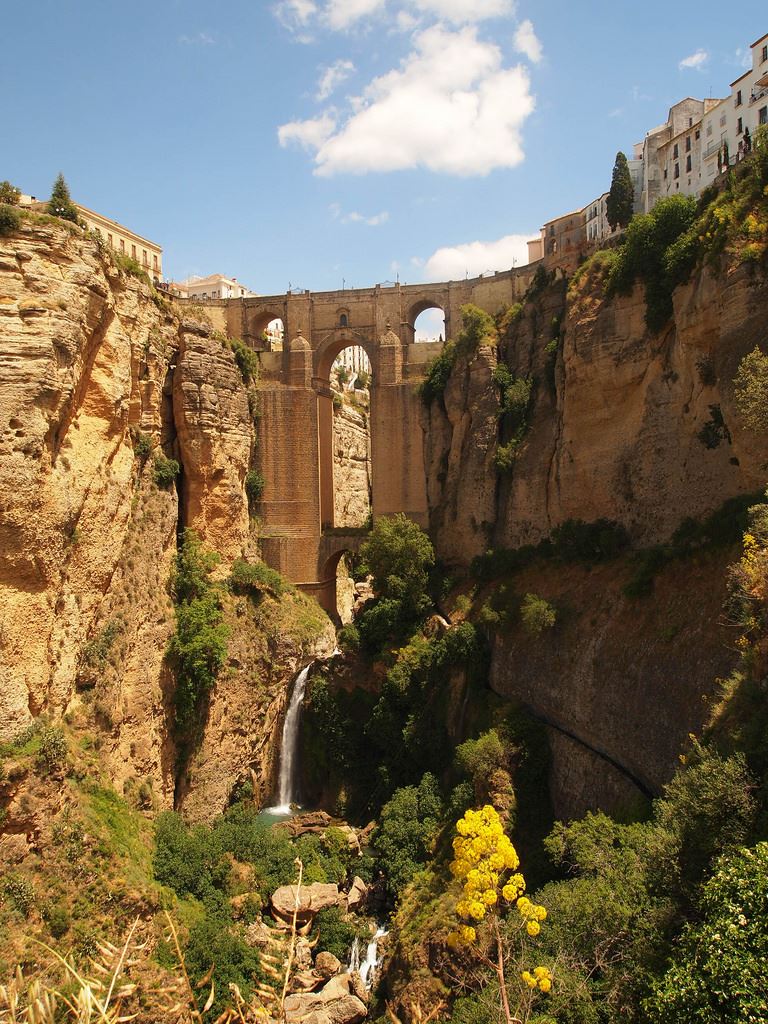 Spain’s most photographed bridge has to be the Puente Nuevo in Ronda which you can see in the photo above. It’s the newest and largest of three bridges that span the 120-metre-deep chasm that contains the Guadalevín River and divides the city of Ronda. Don’t let the word ‘nuevo’ fool you. It’s been here a while. Building started in 1751 and it was completed in 1793. It’s height is 98m. The architect was José Martin de Aldehuela. 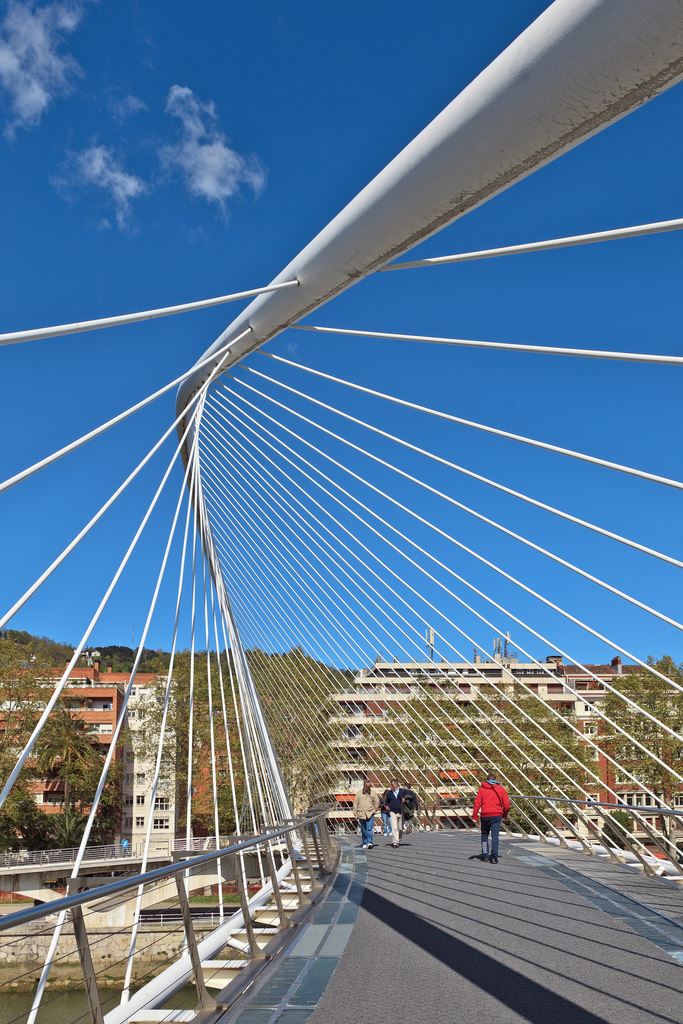 Bilbao’s Zubizuri meaning white bridge in Basque is also called the Campo Volantin Bridge or Puente del Campo Volantin. It’s a tied arch footbridge that is 15m high and measures 75m across the Nervion River in Bilbao, Spain. It was the handiwork of architect Santiago Calatrava and was opened in 1997 – the same year the Guggenheim in Bilbao was opened. Handsome by day, this bridge becomes ethereal by night. If you’re keen to see the best bridges in Spain – you’ll want to see this one before and after dark. 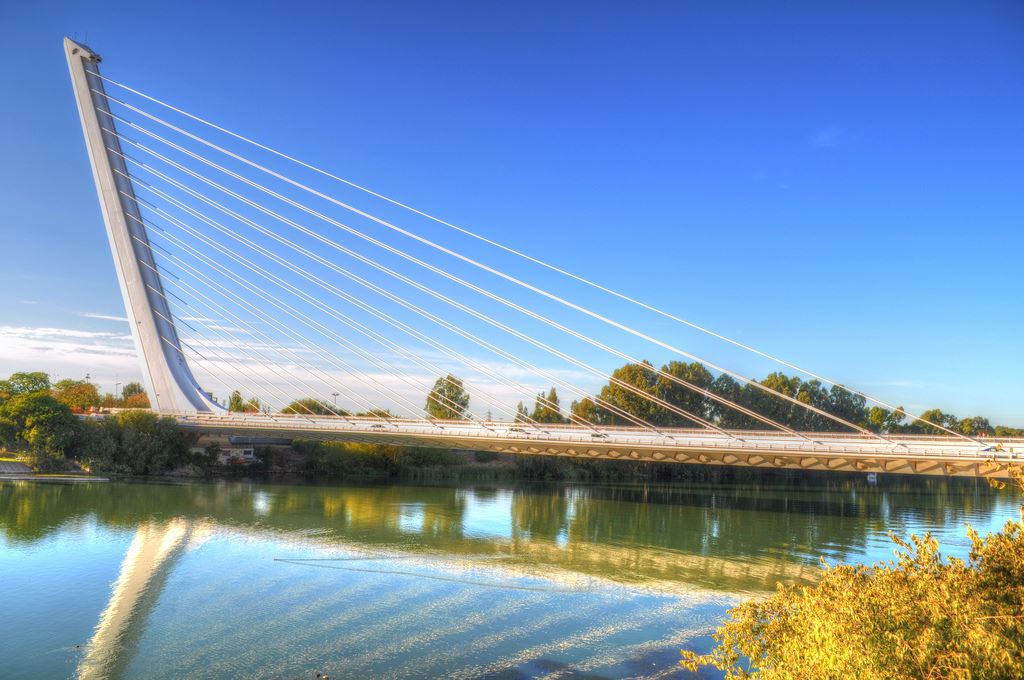 4 The Alamillo Bridge in Seville
Another Santiago Calatrava creation, designed for the 1992 Expo in the city, Seville’s Alamillo Bridge measures 250m and spans the Alfonso XIII Canal. Its most distinguishing feature is the tall pylon that stands at 68 degrees and is anchored by 13 cables. To us it seems very boat-like – which was perfectly fitting for the 1992 Expo that commemorated the Discovery of America. 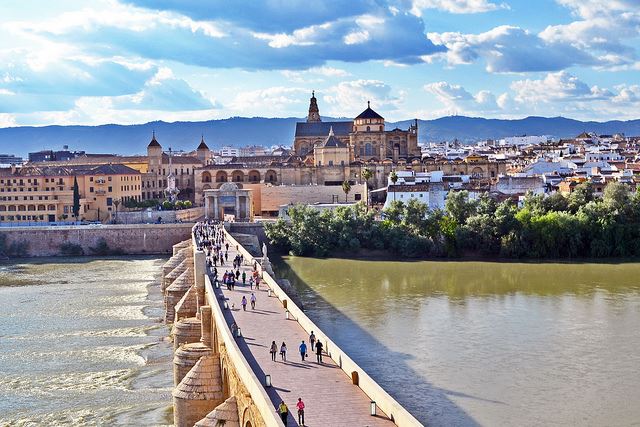 5 The Roman bridge in Cordoba

Dating from the 1st century AD, this Roman bridge over the Guadalquivir river in Córdoba measures 250m long. It has been rebuilt in parts and much of what you see now dates from the medieval period. For pedestrian use only now – in its day it’s carried armies, trucks, buses and cars across the river. 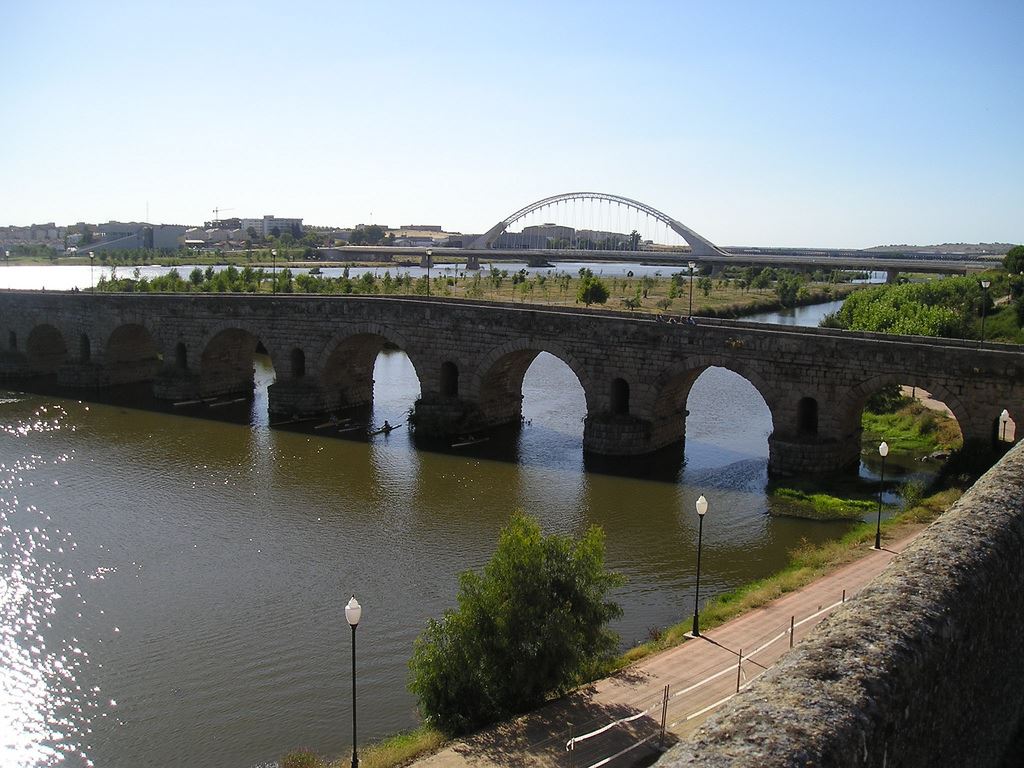 Merida’s Puente Romano is a Roman bridge with 60 spans or half-moons stretching the 792m over the Guadiana River. It’s the longest surviving Roman bridge in Spain. At the time of the bridge’s construction, Merida was known as Augusta Emerita and was the capital of the area knows as Lusitania. Emperor Augustus is long gone and today the bridge is mainly accessed by tourists exploring the old city. You can see Calatrava’s Lusitania Bridge from 1991 in the distance… 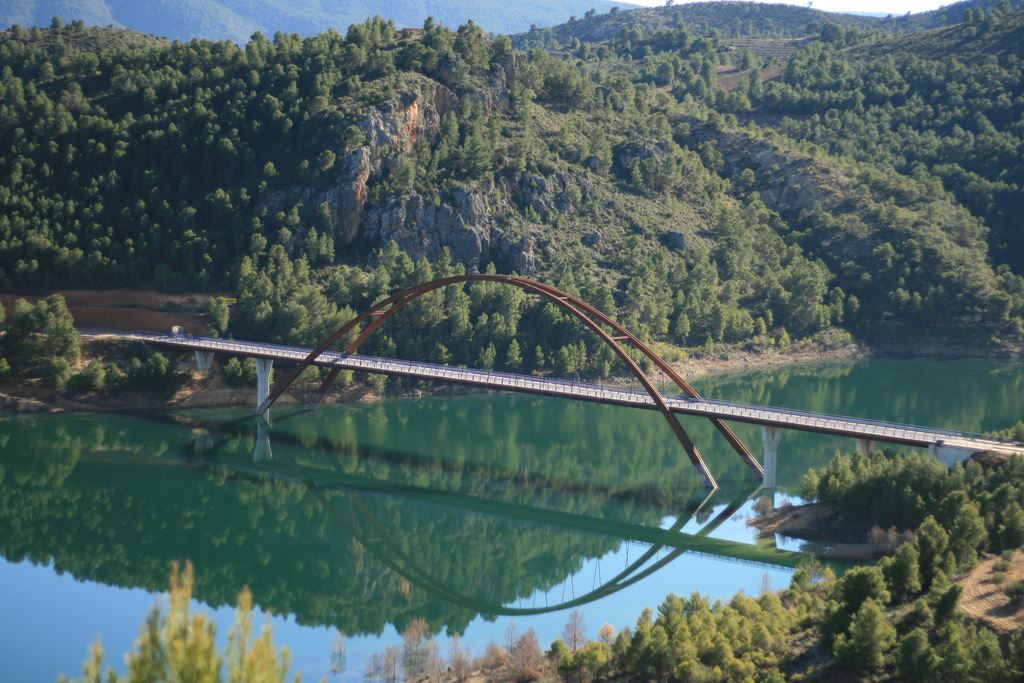 La Vicaria Bridge is a through-arch bridge over the Segura River where it meets the Fuensanta reservoir, near Yeste, in the region of Castilla-la-Mancha, Spain. Measuring 260m in length, it was opened in 2007 but the roads leading up to it were only completed in 2010. It’s a two-lane bridge with pathways going in either direction also. 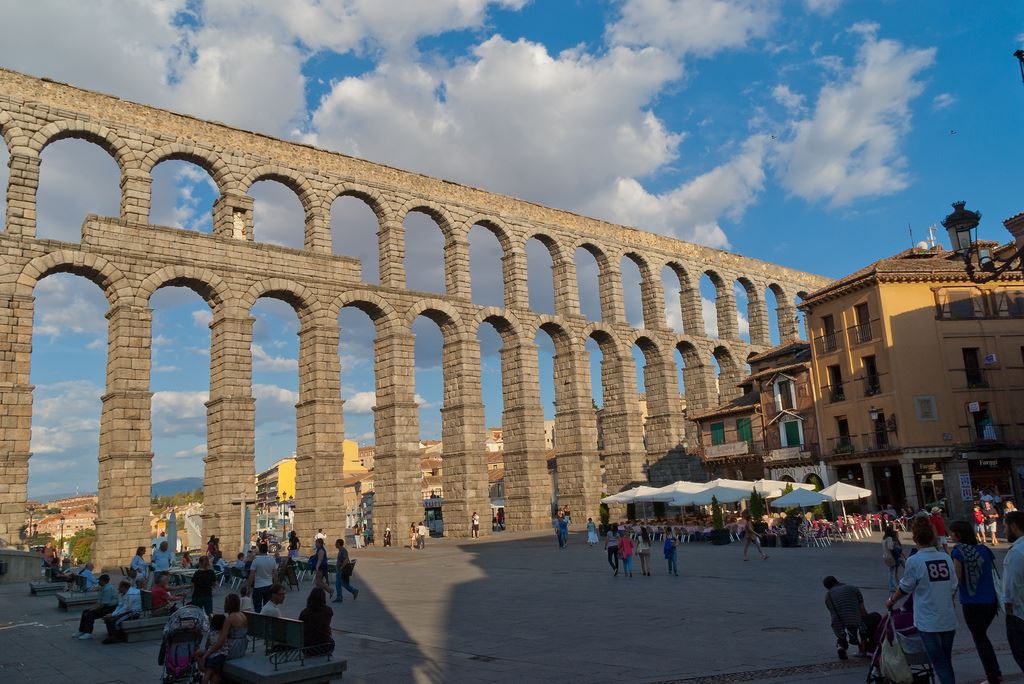 The Roman aqueduct was built in the year 50 AD and is one of Spain’s most significant and best-preserved monuments. This feat of civil engineering was designed to bring water from the Sierra de Guadarrama 18km away. It’s most challenging element was the final descent – which is what we still appreciate 2,000 years later. The Devil’s Bridge or Puente de Diablo is a 813m long and 28.5 m high bridge constructed without the use of mortar or cement. It was still in use until the mid-19th century. We recommend you walk underneath it and take a seat at one of the nearby cafes to daydream at its ingeniousness. We’ve included Segovia in our post on day trips from Madrid. 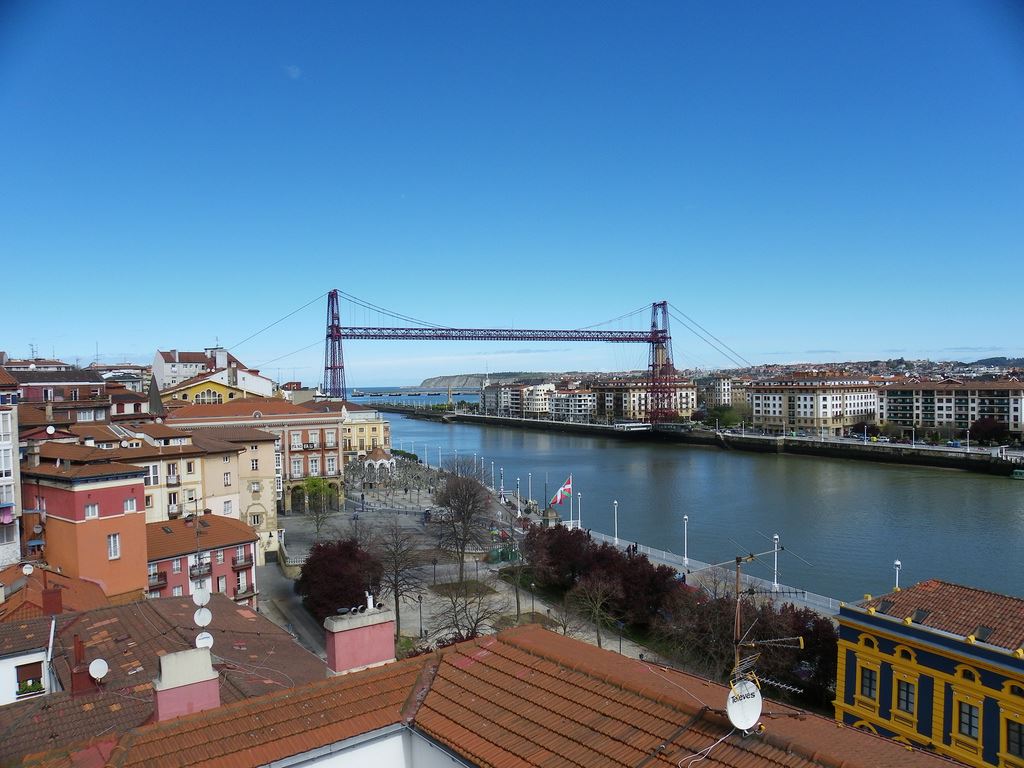 We’ve included this bridge in our driving routes of Spain blogpost. You can walk, cycle or drive onto the oldest hanging transporter bridge in the world and travel over the River Nervion from Portugalete to Las Arenas or vice-versa. The bridge was designed by Alberto Palacio and was opened to the public in 1893. It’s still standing strong at 160m long and 61m high. Read more about Bilbao here. 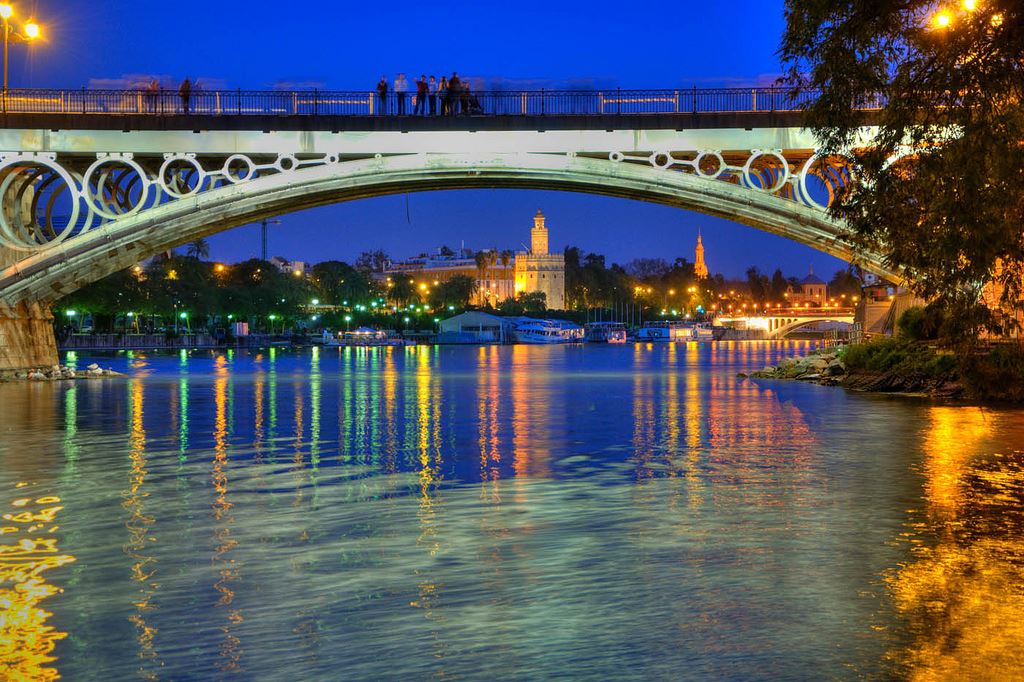 Its real name is the Isabel II Bridge but it’s become known as Triana Bridge because of the neighbourhood where its located. French engineers Bernadet and Steinacher built the 149m long and 7m wide iron structure over the River Guadalquivir in 1852. It was modelled on the Carrousel Bridge over the River Seine in Paris that later became unsafe and was dismantled. Luckily for us, the Seville version is still very much in service. Not only are the views of the bridge nice, but the views of the cathedral and the Giraldilla tower from the bridge are great too. 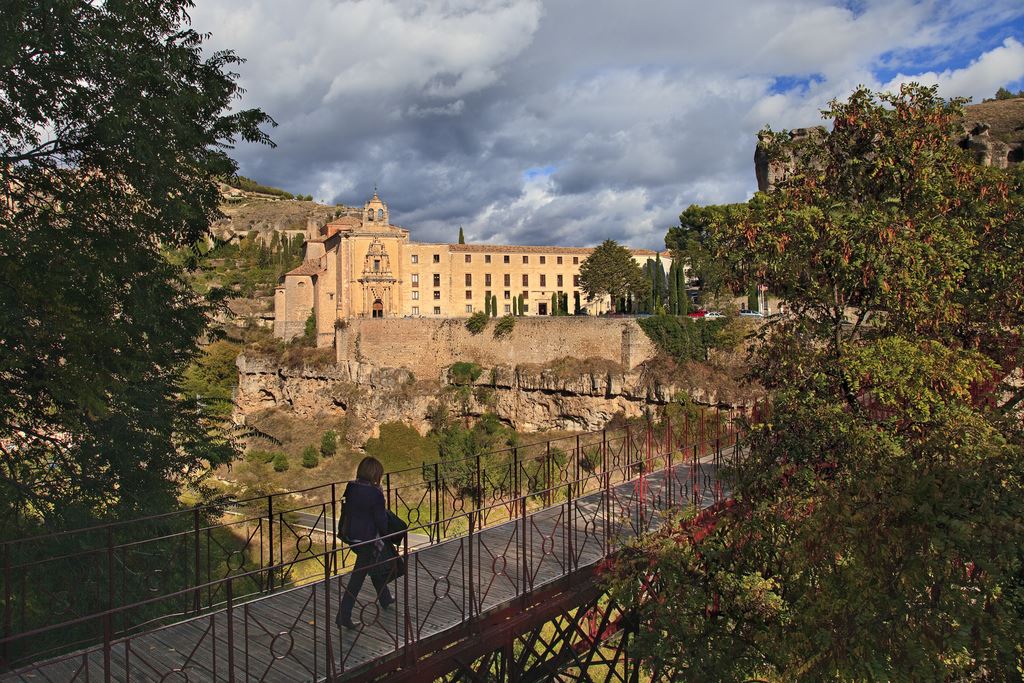 Often it’s not just the bridge that we like – it’s also the views the bridge provides. And this is certainly the case with the San Pablo footbridge in Cuenca. It provides an unique vantage point of the hanging houses for which Cuenca is so well known. The 60m long bridge was built over the River Huecar in 1902 to replace a 16th century stone bridge that crumbled away. If you are in Cuenca, don’t forget to take a stroll across it. To read more about Cuenca, read our day trips from Madrid post. 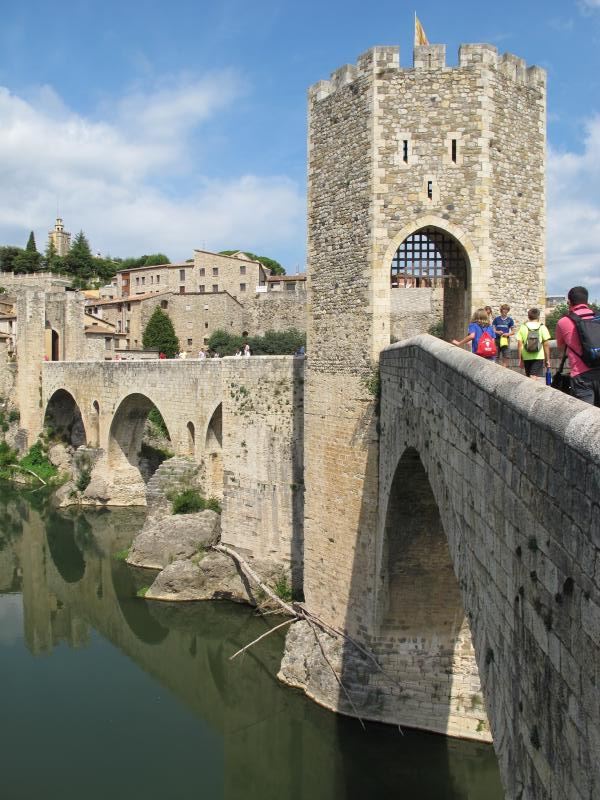 This is a great one for the kid in you. We love the toll gate on this 135m long bridge over the River Fluvía in the province of Girona. And no, you don’t need to pay the toll anymore! There’s been a bridge on this site since the 11th century. What you see now is the result of the 1965 restoration work on the 14th century bridge that was badly damaged during the Spanish Civil War. Pro-Tip: Don’t stop when you get to the tollgate – Besalu is one of the cities with an interesting Jewish heritage and you’ll find a 12th century mikveh and the site of the 13th century synagogue here.

Which bridge do you like most? Of course, there’s lots more bridges including the Zaragoza Expo bridges, some lovely railway bridges and the new bridges that are still under construction. We hope you’ve been inspired to read more about touring Spain’s architecture and engineering gems and get to cross these bridges in Spain soon.