If you’re interested in architecture and looking for something a bit different – how about a vibrant city with a rich history of harmony between cultures?  Come and discover Zaragoza in Aragon and more importantly the incredible Mudejar Zaragoza architecture. 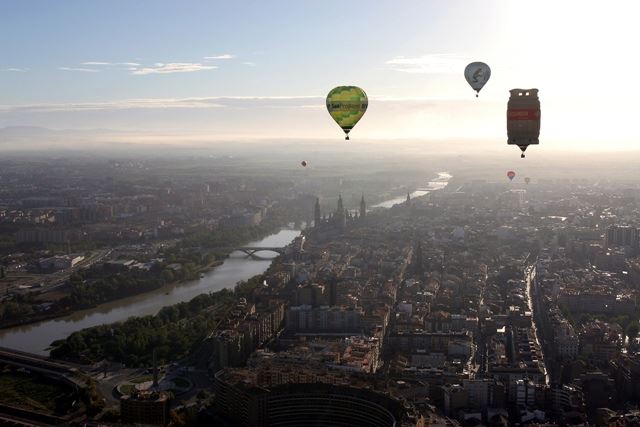 A glimpse of Zaragoza on the Rio Ebro. photo credit: Zaragoza Turismo via photopin cc

It’s in the region of Aragon in North East Spain. Bordering France and at the crossroads between Barcelona and Madrid and Bilbao and Valencia, this region has been of strategic and commercial importance since Roman times. As with many of Spanish cities, you can peel back the layers of history by walking around the different neighbourhoods. And because it’s still a major hub for services, manufacturing and distribution, the city centre is always buzzing and the transport links are excellent.

2 Why Visit Zaragoza?
There are many reasons to visit but what makes Aragon really unique is its UNESCO-listed Mudejar architecture. It takes us back to the time of complete harmony between Muslim, Christian and Jewish culture in Spain. The Mudejar period in Aragon began in the 12th century and finished in the 17th century when the Mudejars were first forced to convert to Christianity and were ultimately expelled. There are many wonderful Mudejar structures across the region of Aragon – but if you have just one day or two to experience Mudejar architecture, we recommend you visit Zaragoza where you can find at least seven stunning Mudejar buildings within walking distance of each other.

3  What’s the first thing to see in Zaragoza?

The Palacio de la Aljaferia started out in the 11th century as an Islamic royal palace and today is home to the Aragon Regional Parliament. Pay special attention to its towers, roof, ceilings and plasterwork. We’re going to let the pictures do the talking! 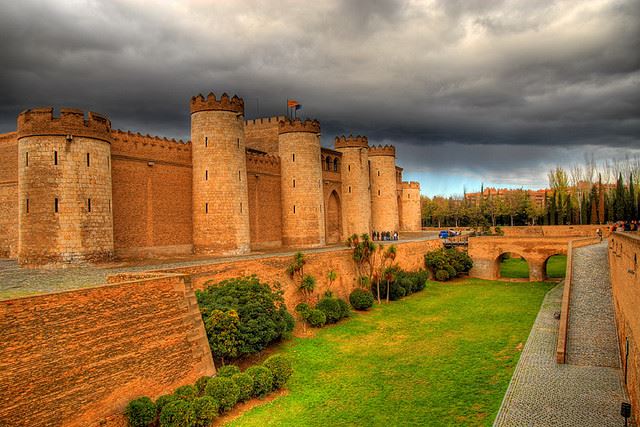 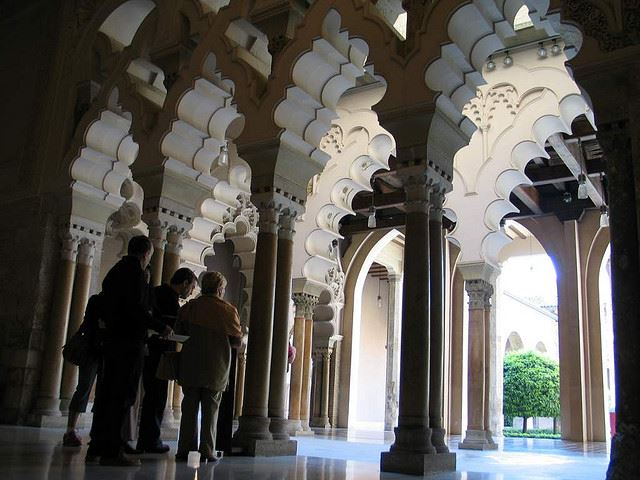 It was an Islamic royal palace in the 11th century. Today it’s home to the Aragonese Parliament. This is the reception hall that faces onto the courtyard. Photo credit: batigolix via photopin cc 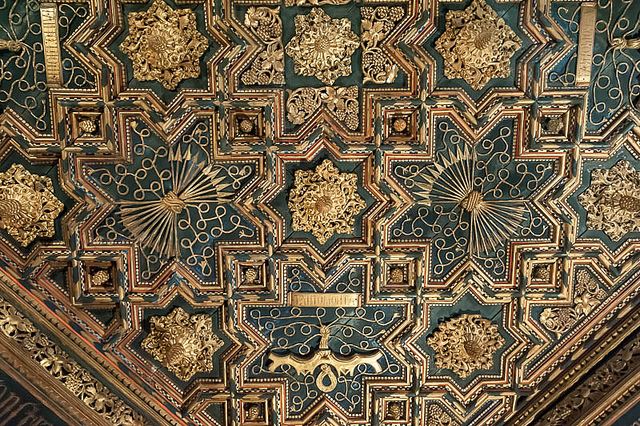 You can really appreciate the craftsmanship that runs throughout the building in this close-up from the Salon of the Throne. Photo credit: jacqueline.poggi via photopin cc 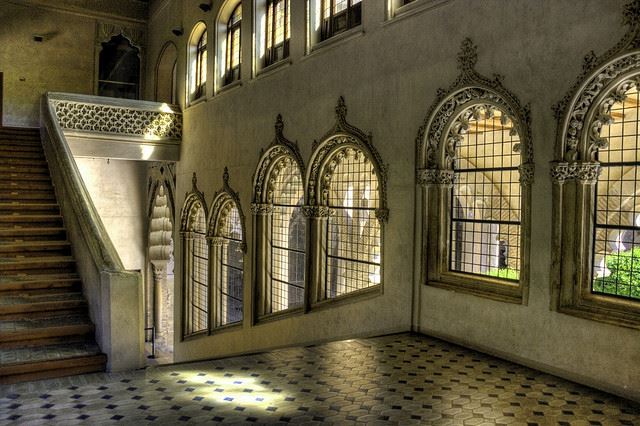 Every room faces onto the courtyard. Photo credit: Wojtek Gurak via photopin cc

4 And the second must-see sight in Zaragoza?

The site for the Seo de Salvador Cathedral has been used as a place for worship as far back as the first century BC. The current structure – a Christian church – was built in the 12th century. It features a range of styles including gothic, Mudejar, Renaissance and Baroque. Don’t forget to visit the Tapestry Museum inside the cathedral. 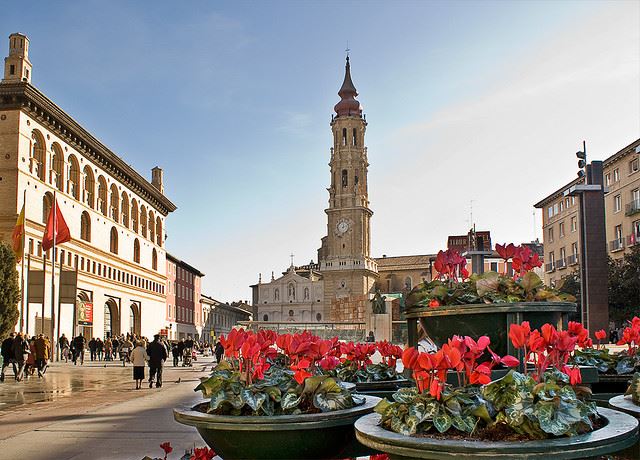 The Cathedral of Seo de Salvador in the distance. Photo credit: Anvica via photopin cc 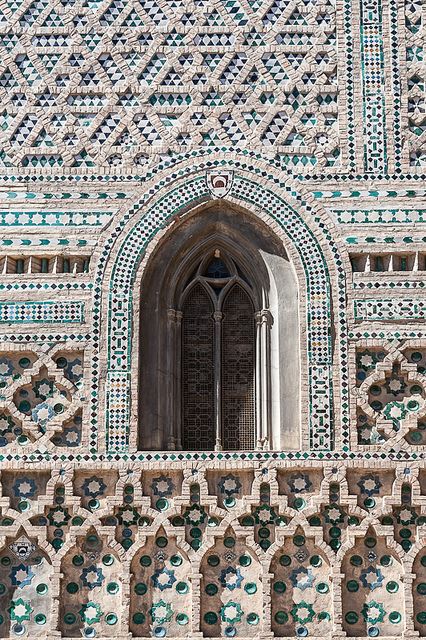 Wonderful brickwork on the Mudejar facade at the Seo Cathedral. Photo credit: jacqueline.poggi via photopin cc 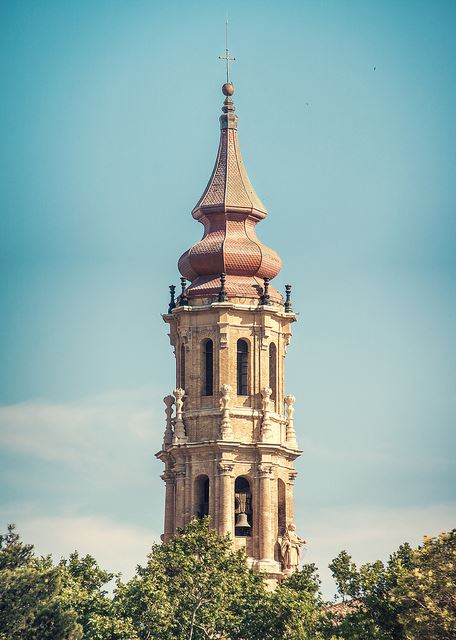 The tower of the Seo Cathedral gets more and more elegant the closer you get. Photo credit: Juanedc via photopin cc 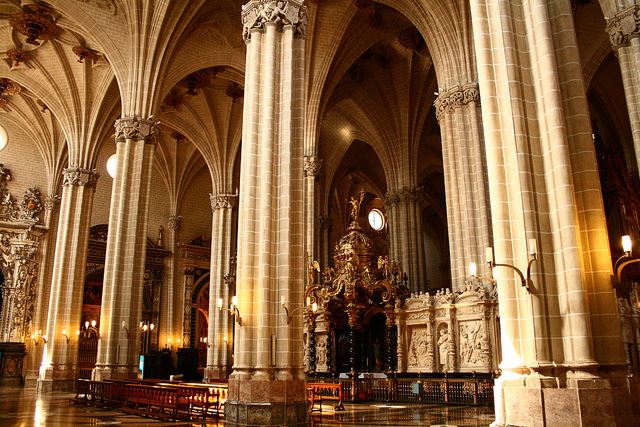 Inside the Seo Cathedral in Zaragoza. Photo credit: F. Castiñeira via photopin cc 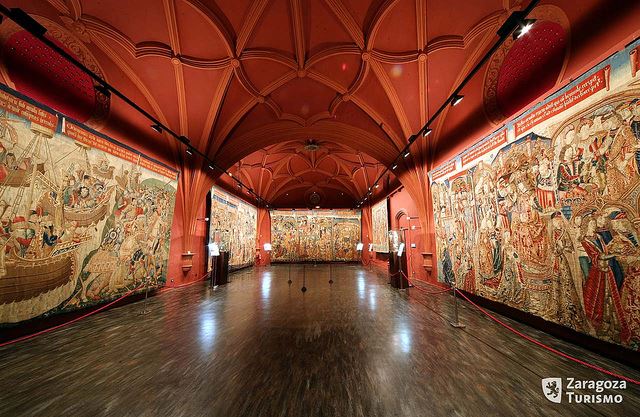 Make sure to visit the Tapestry Museum inside the Cathedral! photo credit: Zaragoza Turismo via photopin cc

5 More Mudejar Marvels to visit on your Mudejar Zaragoza tour?

Other Mudejar buildings include the Iglesia La Magdalena (14th century) which started out as a Romanesque building. The brickwork of the square tower complete with ceramic decoration is stunning to see. Also see the Iglesia de San Pablo – which dates from the late 13th century. Don’t miss the spire, the Mudejar tower from 1343 and the Gothic door from the 15th century. From the 14th and 15th century, San Miguel’s church and bell-tower are the significant Mudejar elements along with the spire. Iglesia San Gil, also from the 14th century, is best known for its tower, decorated with ceramics, friezes and arches. And finally, Santo Sepulcro is the only monastery completely in mudejar style left in Aragon. It’s one of the lesser know and less visited buildings in the city but is well-worth a visit. 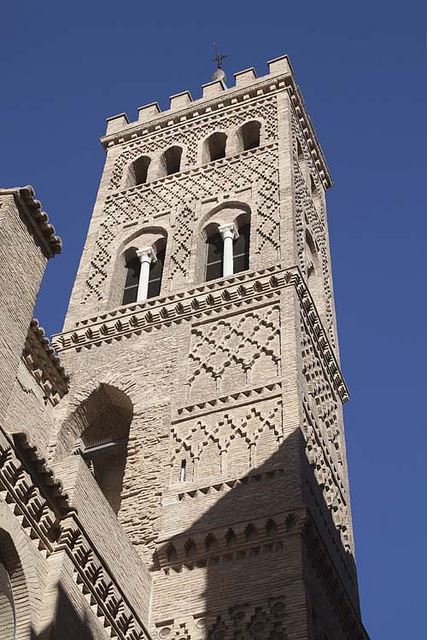 6 What Else is there to See & Do in Zaragoza?

If you like your art, you probably know that Goya was born in the region of Aragon and moved to Zaragoza city in 1749 aged 3. You could start at his statue in front of the Seo Cathedral and go on to see his work in the Museum of Zaragoza, the Basilica of Our Lady of Pilar, the Camon Aznar Museum and the Diocesan Museum of Zaragoza. And if you are into the art-deco style of architecture, you’ll enjoy the modernist architecture is stunning as well – for example the Casa Solans and the old Patria Biscuit Factory. Travelling with a crafts wizard? You have to see the Origami Museum. Brilliant! In Zaragoza with the kids? They’ll love the Firefighters Museum. Of course, Zaragoza is also a very modern city and was host to the 2008 Expo which was themed ‘Water and Sustainable Development’. You’ll find lots of references to the sustainability in the city. And you can’t leave without seeing the views of the city from the top of the Basilica de Nuestra Senora de Pilar! 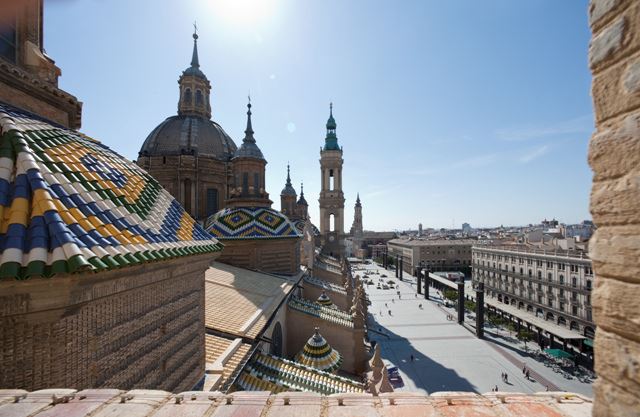 You can’t go to Zaragoza without a visit to the Plaza del Pilar and the Basilica of Our Lady of Pilar. Photo credit: Zaragoza Turismo via photopin cc 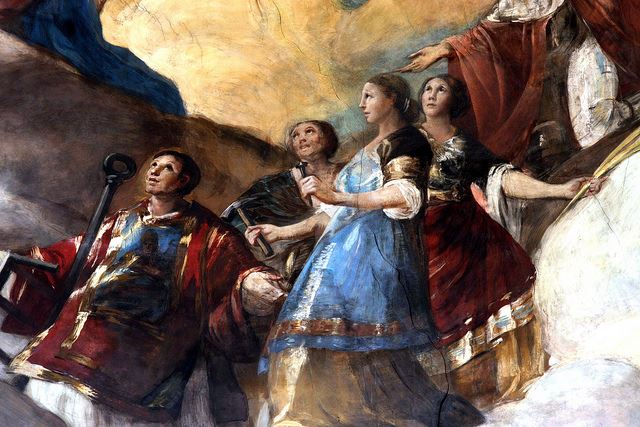 Goya’s work can be seen inside the Basilica of Our Lady of Pilar. Photo credit: Zaragoza Turismo via photopin cc

7 What should you see in the region of Aragon?

If you’ve an interest in the Camino de Santiago, castles, and the Pyrenees, you should spend some time getting to know Aragon. It’s the perfect place for walking, hiking, skiing or perhaps a more relaxed drive around the other towns and cities such as Teruel which also features some wonderful Mudejar architecture. For ideas check out the Top 100 website run by the Aragon Tourism Board. We can arrange a private driver to take you out to the countryside to see some castles, try some regional cooking and experience the Pyrenees. 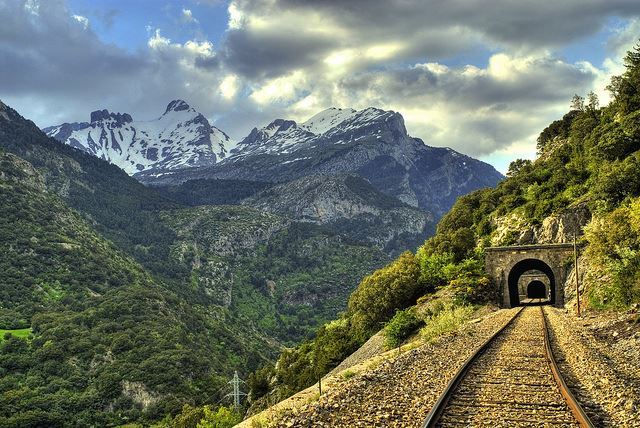 The beautiful countryside of Aragon at Canfranc on the border with France. Photo credit: gatogrunge via photopin cc

8 How to Get to Zaragoza?

It’s still a major hub within Spain and boasts excellent rail, road and air connections. If you are already in Spain, we recommend you hop on the AVE high-speed train which takes just 1hr19mins from Madrid and 1hr 28 mins from Barcelona. You can also connect with Zaragoza from Cordoba in as little as 2 hr 52mins. If you are travelling in from abroad, you should check the Ryanair website for its connections  from Zaragoza to London, Brussels-Charleroi, Paris-Beauvais, Milan-Bergamo and Lanzarote. And Air Europa, Air Nostrum and Iberia also fly into Zaragoza.

9 What to eat in Zaragoza?

The tapas in Zaragoza are excellent. Keep an eye out for local specialities such as truffles, dried tomatoes, saffron and meats. And make sure to try the local Somontano wines and the Ambar beer. If you happen to be travelling at the end of February or the beginning of March, you’re in luck! Head for the Annual Tapas & Miniature Cuisine Festival in the Rabal area of the city. 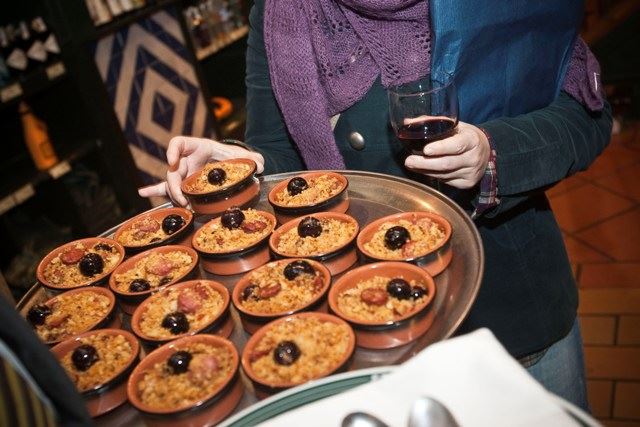 Trying the migas or breadcrumbs which is a popular dish in Aragon. photo credit: Zaragoza Turismo via photopin cc

10 When to Visit Zaragoza?

The city is at its busiest during the Fiestas del Pilar – the patron saint of Zaragoza – in and around the 12th October. Other interesting events are Three Cultures Medieval Market in June and the International Folk Festival in September. But you can enjoy Zaragoza any time of the year. 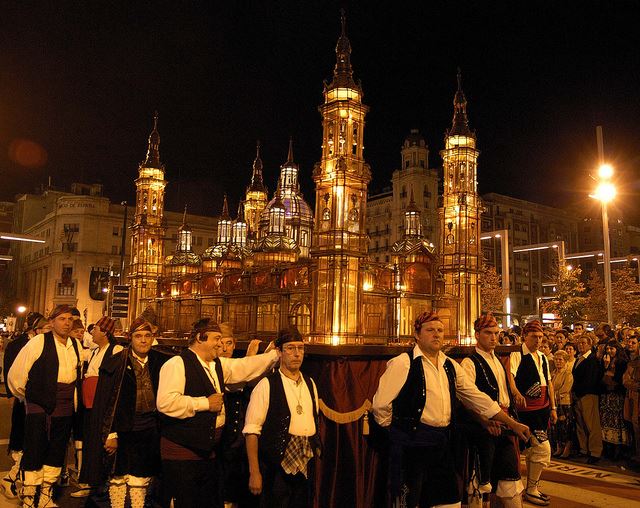 The Crystal Rosary takes place during the Pilar Fiestas in October. The 15 hand-crafted Mysteries and 200 hand lamps, date back to 1890. photo credit: Zaragoza Turismo via photopin cc