Travelling to Spain and want to avoid queuing for the big attractions? A whopping 75.3m people visited Spain in 2016, so if you want to visit the big attractions, here at Totally Spain, we highly recommend you pre-book your tickets. It’s part of what we’ve been doing for our clients since we started our back in the year 2000. Below are the real pressure points amongst Spain’s Top Museums and Monuments where you’ll absolutely have to pre-book to avoid long waits:-

Pre-Booking Museum Tickets in Spain Before You Travel

1 Why do we recommend pre-booking museum tickets in Spain?

Firstly, it’s the best way of making sure that you get access. By pre-booking the attractions you don’t have to worry about reading up on opening hours and checking local bank holidays. If you’ve booked a place you know you’re going on a day and time when the museum is open. Secondly, you avoid the queues. You’ll thank yourself – especially if you are travelling in high season when standing in a line means baking in the sunshine. By pre-booking you get to keep your energy for the visit! And finally, pre-booking tickets means you know the exact time of visit so you can plan the rest of your day. Check out the nearby markets, cafes and restaurants beside the museum – you’ll have lots more time to explore the neighbourhood if you are not standing in a line.

2 Pre-Book the Alhambra in Granada

2.5 million people visited the Alhambra in 2015 (still awaiting figures for 2016). That’s an average of 6,800 per day which is a lot of people to stand behind in a line! We’ve written a detailed post about the ticketing system for this jewel of Andalusia – which is quite complex. Read it here. 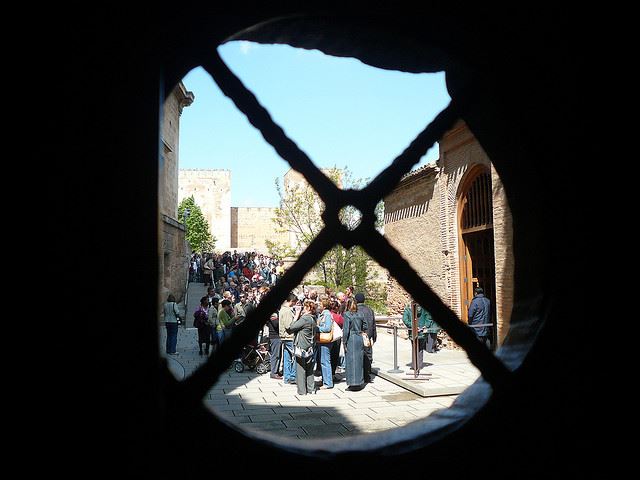 A line of people waiting to visit the Alhambra in Granada. Photo credit: Lars Plougmann via photopin cc 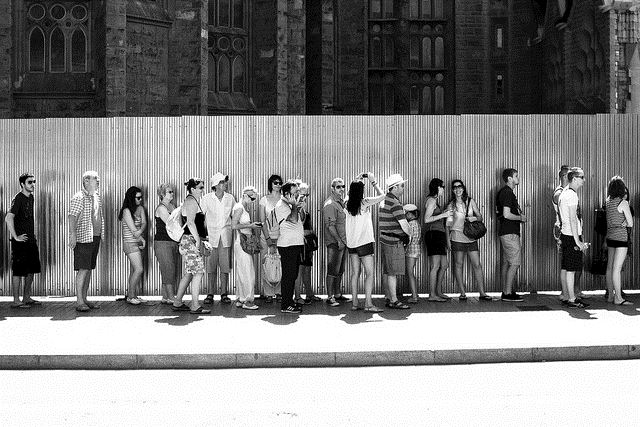 It has finally completed its restoration programme (50 percent of which was paid for by the advertising on its scaffolding!) Well – it’s looking better than ever and you want to be inside not in a queue waiting to enjoy this great building by Gaudi that attracted 1.2 million visitors in 2016! And Gaudi’s Casa Battlo isn’t far behind with 992,000 visitors in 2015 (we’re awaiting the numbers for 2016 still). 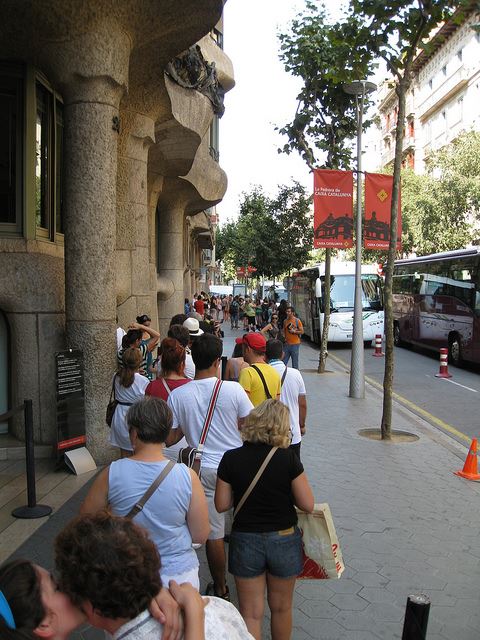 Getting in line at Casa Mila also known as the Pedrera in Barcelona. Photo credit: Matti Mattila via photopin cc

The park started charging for entry in October 2013 and in the first full year, the visitor figures fell from 9 million visitors to 2.3 million. In 2015 it rose slightly to 2.7 million again which isn’t what the Town Hall wants to see as the park was extremely crowded before the entry charge began. Although the numbers are lower, it’s right up there with the Alhambra in terms of crowds so you really do need to pre-book. We’re still waiting for the 2016 numbers which haven’t been released yet. 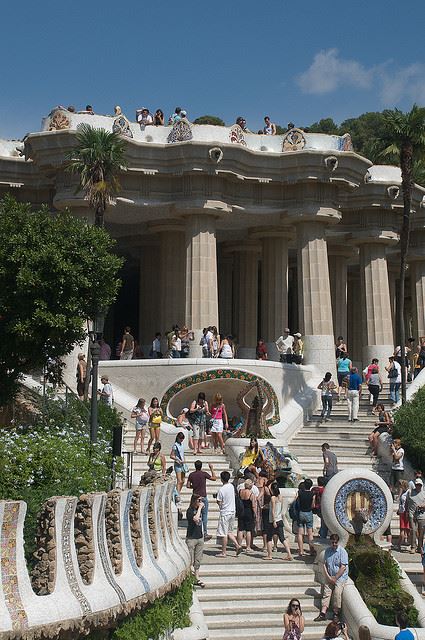 If you want to see some Gaudi when you come to Spain. you’ll need to plan ahead! photo credit: ClifB via photopin cc

615,000 people visited this concert hall in 2015. While that’s a lot less than some of the other attractions here, this is a visit that really lends itself to quiet contemplation and awe – it’s such a beautiful space. Please believe us when we say you need to pre-book this one! 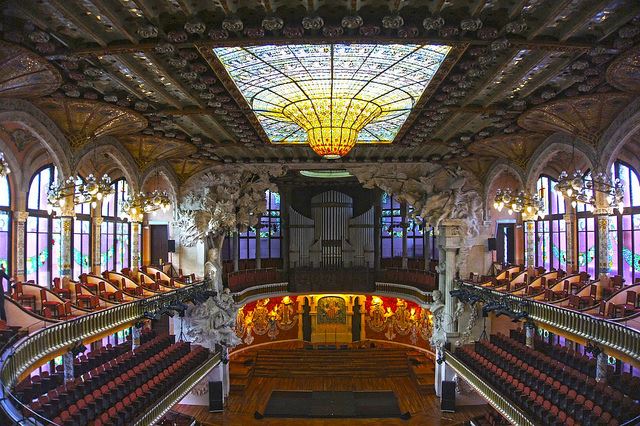 This is where you want to be – inside the Palau de Musica – not waiting in a line at the entrance. Photo credit: Samuel Santos via photopin cc

7 Pre-book the Royal Palace in Madrid

1.5 million people visited the Palacio Real in 2016. The queues are really long for this one – and it’s such a large space inside you need all the energy you can muster just to get around. Pre-booking is essential. Read what else to see and do in Madrid here. 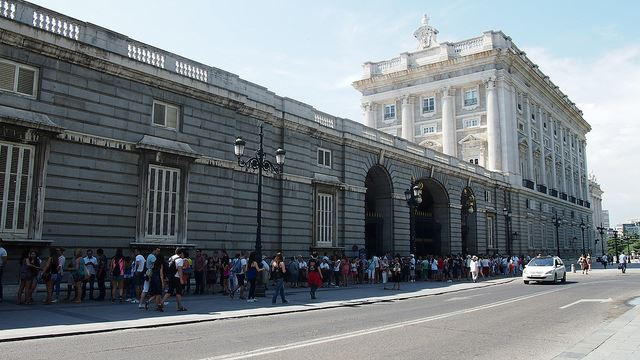 The queues for the Royal Palace in Madrid seem to go on for ever. Photo credit: isriya via photopin cc 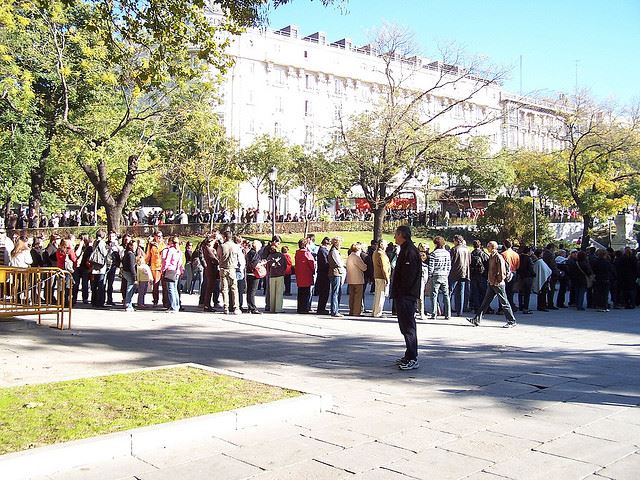 Long lines to see the wonderful Goyas at the Prado Museum in Madrid. Photo credit: Nathan Wind as Cochese via photopin cc

9 Pre-book the Alcazar in Seville

The castle in the centre of Seville has always attracted large numbers but the filming of some scenes from the Game Of Thrones has increased the interest in this space which translated into a whopping 1.6 million visitors in 2016! The cathedral also attracted 1.6 million visitors also so if you are planning a trip to Seville, make sure you pre-book as much as possible! 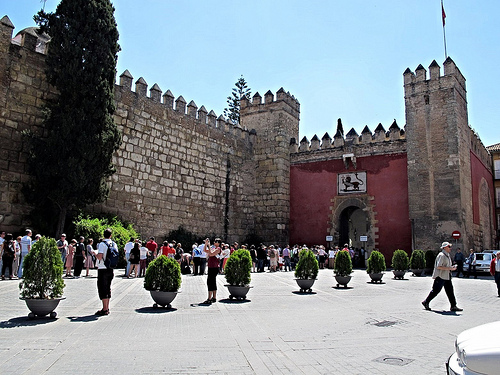 Avoid these long lines at Europe’s oldest royal palace still in use today – pre-book your tickets before you arrive…photo credit: ali eminov Long lines to get into Alcazar, Seville, Spain via photopin (license)

10 Pre-book the Guggenheim Museum in Bilbao

Gehry’s masterpiece attracted 1.1 million visitors in 2016. Make sure you see it in style – don’t waste your time in the queue – any time not exploring the space should be spent in the lovely cafe, the Michelin star restaurant or the excellent bookstore! Read more about Bilbao and the Guggenheim here. 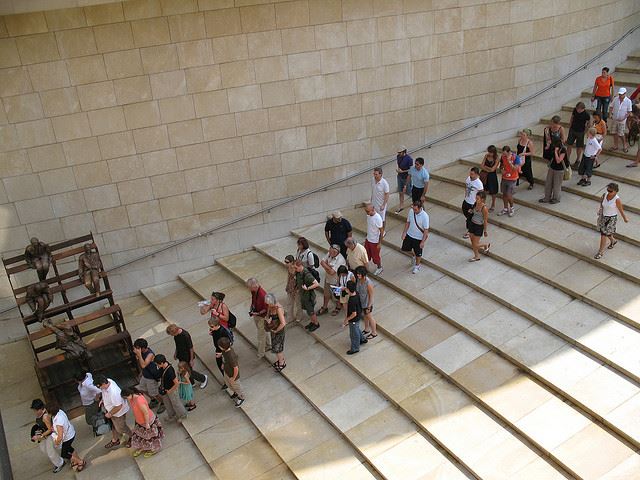 Not the most interesting of views at the Guggenheim Bilbao so why spend more time than you need to? Photo credit: Risager via photopin cc

Just shy of the 1m visitor mark in 2016, the queues snake down the Carrer Montcada every day so you are well advised to book in advance. Want to see what else to visit in Barcelona? 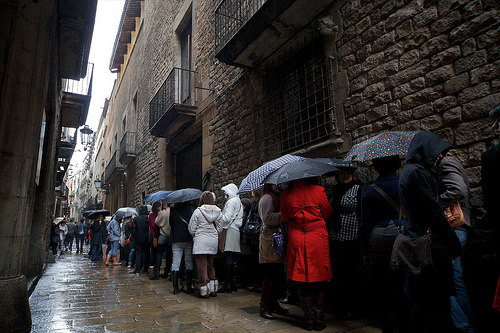 If you want to avoid standing in this damp line, pre-book your ticket’s for Picasso’s Museum in Barcelona. photo credit: Riggzy Our Queue, Pablo Picasso Museum via photopin (license)

12 Pre-Book the Picasso Museum in Malaga

Although it’s only been open a decade or so (which makes it one of the younger attractions) it was Picasso’s own wish to have his work exhibited in the city where he was born. Make sure you spend the time examining the 250 + works by Picasso rather than standing in a line. 558,033 people visited the museum in 2016 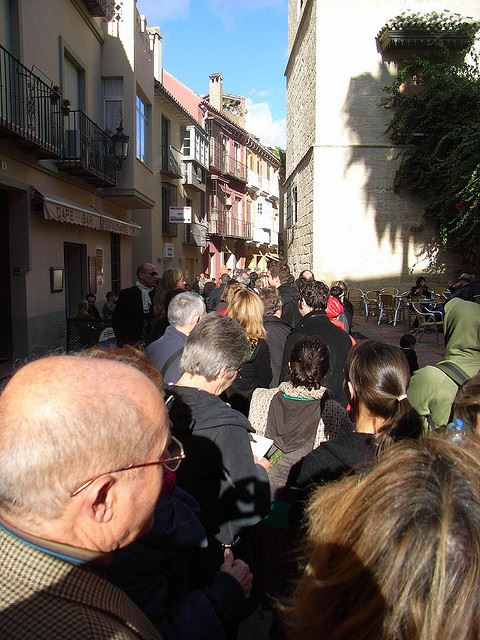 As you can see you won’t be the only one keen to see Picasso’s work in Malaga. Photo credit: Clive Hicks via photopin cc

13 Pro-tip: There are still a few more places in Spain that are necessary to pre-book

14 Need our help pre-booking museums in Spain (or any other tickets for that matter)?

If you book your complete trip through Totally Spain, all the finer details including entrance tickets to the most visited monuments, popular shows and other unique experiences are included in your custom package, saving you valuable time and avoiding any unexpected disappointment.