Time to go back to Spain?  If you are thinking about another Spain vacation, we have 14 remarkable hidden Spanish sights we believe will knock your socks off. All are well known by the Spanish but amazingly, they don’t seem to get as much attention internationally as they deserve. No harm in that at all as it means they are much quieter than the big attractions.  So, if you are planning a return holiday to Spain, do consider including some of these lesser known Spanish gems. We’ve been including these types of places in our Totally Spain travel itineraries since the year 2000. Our clients adore them and we hope you will too. 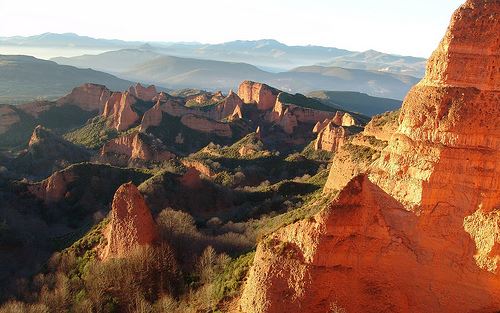 This amazing landscape  – a World Heritage Site – is the result of Roman gold-mining techniques. The cultural park lies within the Bierzo region – which has a great wine tradition. You’ll find an information centre in the town of Las Medulas – from there they can advise you on guided visits, walking, cycling and driving routes. The nearest city is Ponferrada (24km) and Leon is 154km from the Medulas. Pro-tip: If you don’t wish to get behind the wheel yourself in Spain, we can arrange for an expert private guide/driver to drive you around some of all of these gems. If you are happy to drive, read our tips to driving in Spain and Portugal here. 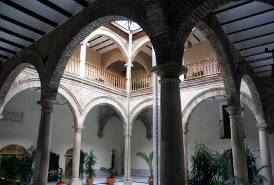 2 The Palace of Villadompardo (including the Arabic Baths), Jaen ANDALUSIA

The Palace of the Counts of Villadompardo, in the city of Jaen, is a beautiful renaissance style building from the 16th century. However the Arabic baths within the palace, date back to the 11th century. They were only discovered in 1913 and were restored in 1970. You can visit the palace and the baths – and under the same roof you’ll also find the International Museum of Naive Art and Jaen’s Museum of Art and Popular Customs. Jaen is 94km north of Granada (you can read our guide to visiting the Alhambra in Granada here.) 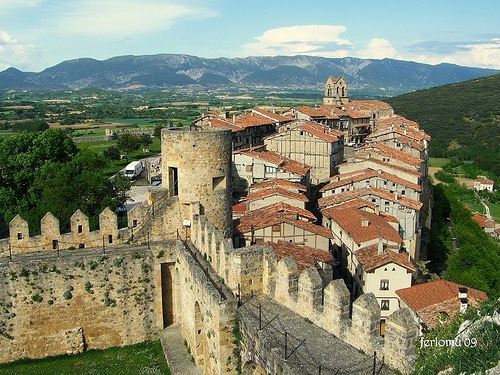 This Castillian town is best known for its mediaeval bridge, hanging houses, castle and church. It dates back to the 9th century and has preserved its mediaeval layout and atmosphere beautifully. Curiously, the Romanesque front of the church of San Vicente is now in New York. It was moved there when its tower collapsed. Frias is 40km from Miranda de Ebro – and we wholeheartedly recommend the drive along the Ebro River from Mirando de Ebro to Frias via Sobron – absolutely stunning. 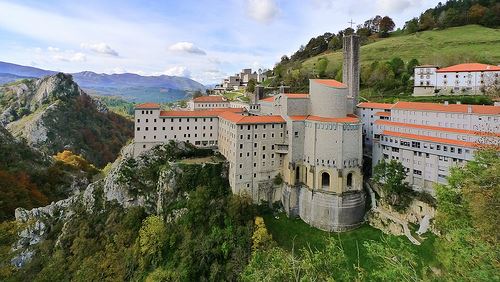 Painter Ignacio Zuloaga called it the Basque Toledo and we agree. It’s home to a renaissance university, a gothic monastery and baroque council building so there’s something for every taste. The noble town is snugly nestled in between the mountains and on top of caverns and streams. It’s close to the Aizkorri Natural Park and just 46km to Vitoria/Gasteiz and 74km to Bilbao. (Check out our guides to Vitoria and Bilbao.) 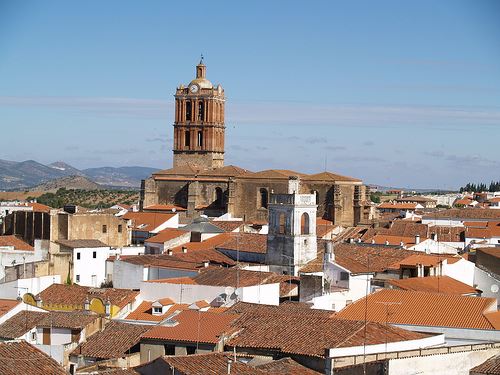 A wonderful mix of Moorish and Christian influences, we enjoy visiting the 15th century parador which has 9 stunning round towers. Also noteworthy is the 18th century Plaza Grande, the 16th century Plaza Chica and the Santa Clara convent from 1430. Inside the walls the streets are whitewashed and cobbled – outside the walls lies a modern city. It’s 62km to Merida and 136km to Seville. (Check out our detailed guide to Extremadura.) 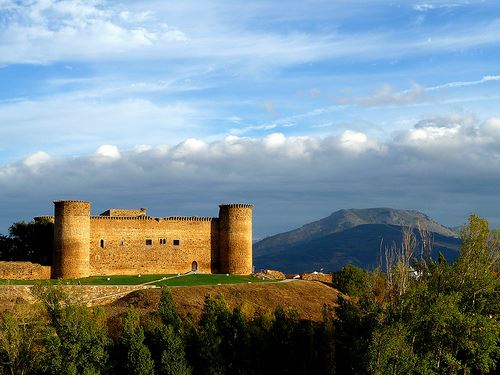 One of the most extensive mountain ranges of the Central System, this typically granite-based natural park draws its contours from a number of separate magma convulsions. It is an area enriched with plant life and has five endemic species. Its highest peak is Pico Almanazor at 2592m. Pictured here is Barco de Avila overlooking the Sierra. It’s 74km to Avila. Read all about this and the other national parks in mainland Spain here. 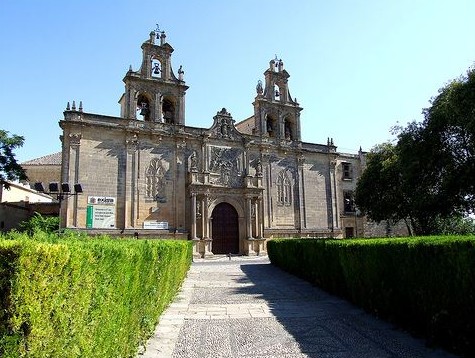 Ubeda and nearby town Baeza (just 10km away) are in the heart of the olive growing countryside and a drive around the area is well-rewarded. Its golden age was in the 16th century  – which is the time when most of its spectacular renaissance style churches and palaces were constructed. Together with Baeza, it is listed as an UNESCO heritage site. Ubeda is home to an unbelievable five palaces – and Baeza another two. Pictured is the 13th century Santa Maria de los Alcazares Church of with its 17th century facade. Ubeda is 60km from Jaen. 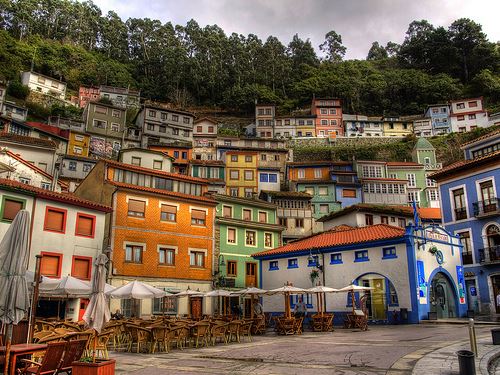 A beautiful fishing village that appears to drop straight from the hillside down into the old fishing port. Great for eating seafood platters and some picture-perfect maritime walks to the new marina. It’s on the Camino de Santiago on the Northern Way so you’ll see quite a few pilgrims with shells in the area. It’s 50km away (by car) from Gijon and 58km from Oviedo. (Read about one of our trips to Cudillero in Asturias here, review our guide to Northern Spain here and check out other great Northern fishing villages here.) 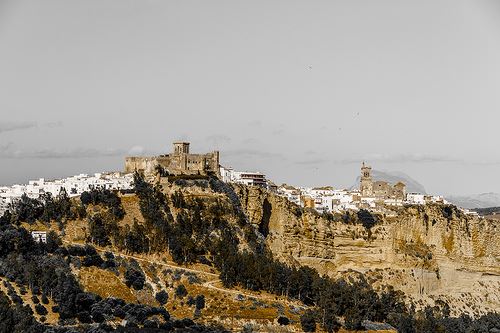 A warren of narrow streets and white-washed houses, Arcos’ name derives from its location at the frontier of the clash with the Moors in the 13th century. You should visit the churches, castle, city hall and enjoy the vertigo-inducing views from the walls down to the valley. Do not drive  your car inside this walled city if it’s much bigger than a Mini. It is 36km from Jerez. Read about the wineries, flamenco and dancing horses of Jerez here. 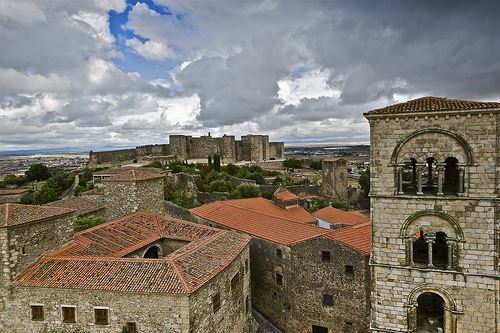 Founded by the Romans and fortified by the Moors in the 13th century, Trujillo was enriched financially and architecturally by its many immigrants who made their fortunes in the Americas. See the Plaza Mayor, three palaces, the Torre del Alfiler, three churches and castle. It’s 45km to Caceres and 88km to Merida. Read what we enjoy most about Extremadura here. 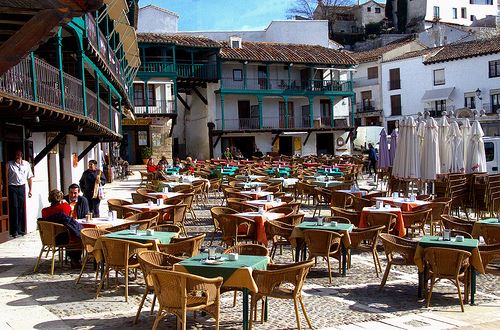 Infamous in Spain for the aniseed drink which is produced in the hills around the town – the town’s almost circular plaza is overlooked by lovely galleried houses from the 15th and 16th centuries.Offering relatively little to do other than enjoy the main square, this charming town is a great place to do just that. Enjoy a few hours with a drink or a meal in the plaza and watch life take place around you. It has three big festivals each year – in March for the Anis, in October for its garlic and bullfighting takes place in the main square in October also. It’s located 21km from Aranjuez so it’s a pleasant add-on to a trip there. It’s 46km to Madrid. (Chinchon is just one of our 10 recommended daytrips from Madrid.) 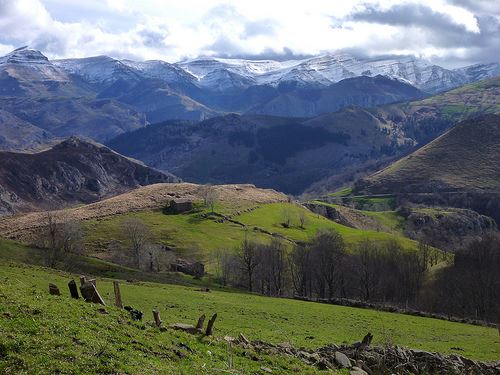 Between the bay of Santander and the northern Merindades region of Burgos, you’ll find the valleys of the River Pas. It was once a region where herdsmen – called pasiegos – moved their herds up the valleys in the summer months and down in the cooler seasons. Many of the Summer stone houses can be found at the peaks of the Valles Pasiegos – such as the ‘cabana’ in the photo below taken at  San Roque de Riomiera – which is 40km from Santander. You can read lots more about the region of Cantabria here including 21 Images that Define Cantabria. 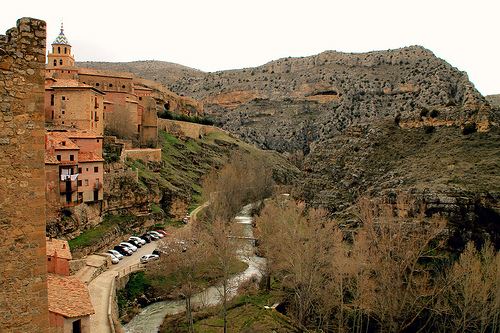 Hidden in between the Sierra of Albarracin, this mediaeval town with its reddish tones is located on a spectacular platform perched on top of the Guadalaviar River. The walls, which appear to climb up the hill behind the city, date back to 10th century (although some sections were rebuilt in the 14th century). The streets are long, narrow and winding – and the views are enchanting. Visit the Plaza Mayor and see the hanging houses that wouldn’t look out of place in Cuenca. It’s 38km from Teruel. 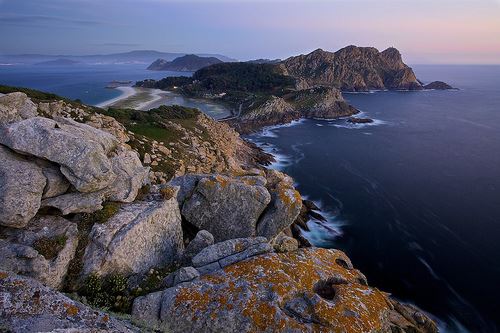 An hour’s boat trip from Vigo or 40 mins from Baiona will take you to the Islas Cies – consisting of Monteagudo Island, Lighthouse Island and San Martino Island. The last two are joined by Rodas Beach which is adored by writers and photographers. This stunning set of remote islands with white sand and crystal water overlooks the entrance to the Vigo estuary. The area was declared a national park in 1980 and is home to the largest colony of seagulls in the world. There is a visitor centre, shop and restaurant on the islands. (See more images from the Cies and our trip to Galicia here.)