One of the most common questions we answer is about Spanish mealtimes. Being based here in Spain, we frequently see travellers to Spain sitting down to meals at the wrong time. We always encourage our  Totally Spain clients to make a note of (and adapt to) Spanish mealtimes – especially when travelling to less touristy areas and in the low season. Why? If you do dine at the correct Spanish mealtimes, you are much more likely to find yourself eating authentic Spanish food with lots of local colour, noise and atmosphere – which is always better than dining alone.

How to Survive Spanish Mealtimes – Just When Should You Eat While In Spain?

It’s hard to generalise but in the North the basic breakfast will include a freshly squeezed orange juice, and a coffee with a sweet pastry. And in the South, you’ll find the juice and coffee plus a toasted baguette, with olive oil to drizzle and fresh tomato puree as a jam. Countrywide at breakfast buffets you’ll find cured meats such as Jamon Serrano and chorizo plus a selection of cheeses. Egg dishes including the Spanish tortilla may also be on offer. The larger hotels will serve other egg dishes and cereals such as mueslis. 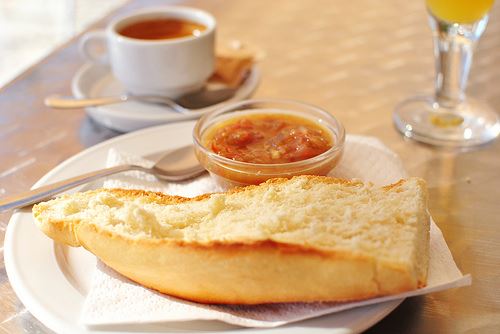 Pan con tomate or bread with tomato is served for breakfast in the South of Spain. Photo credit: topsynette via photopin cc

2 Mid-morning snack from 11am+

Do not miss this mini-meal, if you’ve had a light breakfast, an early breakfast or know you’ll having a late lunch. Bars offer deals that include a coffee with a slice of Spanish tortilla or a savoury sandwich for less than 3 EUR. 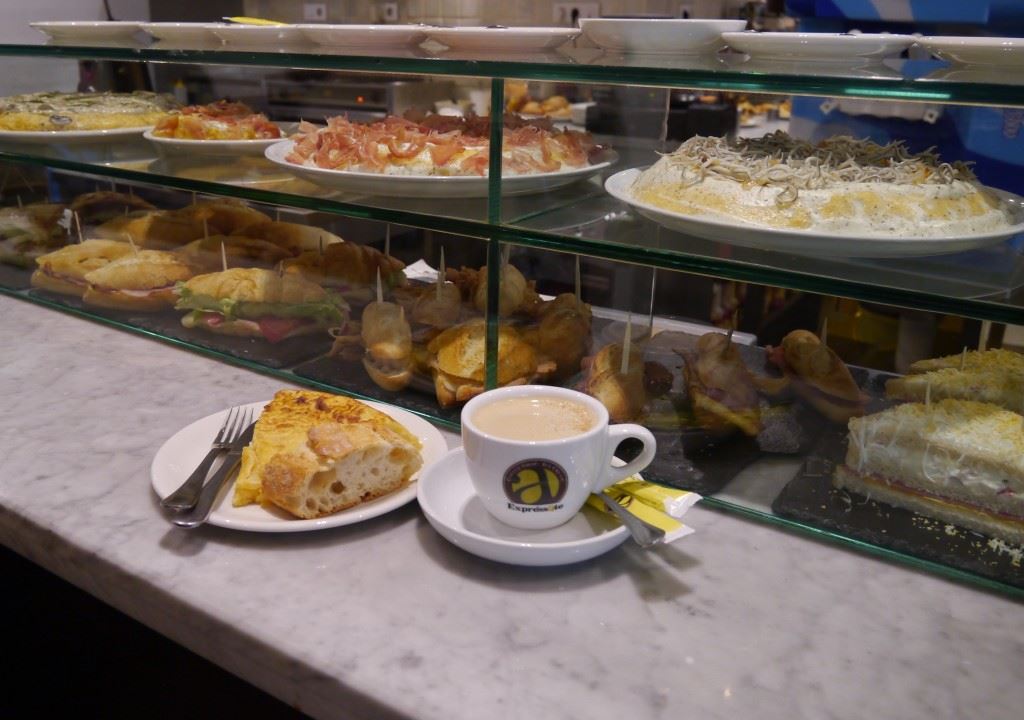 At weekends, friends and families meet for a pre-lunch drink which often runs into lunch. You’ll see platters of squid, prawns, and Jamon being washed back with martinis, local vermouths, sherries, grape juices, white wines and beers. You might want to read our guide to alcohol-free drinks if you want to experience aperitivo and still be able to sightsee or drive around afterwards. 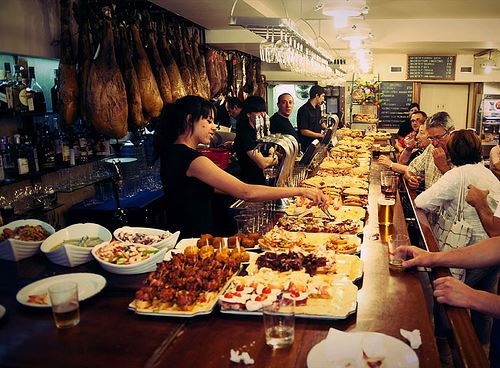 Tapas make for the perfect snack food and at the weekends you can have one and go on somewhere else for lunch or have three or four and that’s your aperitivo and lunch rolled into one! Photo credit: kasi metcalfe via photopin cc

It’s a three-course affair whether you eat in or out. Typical starters in Summer include salads, gazpachos and vegetable-based dishes. On the coastline, you’ll find more seafood dishes such as paella. In the cooler months you’ll find hearty soups with white beans, chick-peas and lentils. Second courses will often be protein-high; usually a meat or fish dish. During the week, most Spaniards skip dessert and opt for a coffee but if you have a sweet-tooth, you’ll find plenty crème-caramels, baked cheesecakes and rice puddings plus many local specialities. And you may be offered a ‘chupito’ which is usually a local liquer in a shot glass. Look our for the ‘menu del dia‘ which is a set-price three course meal offered by many restaurants from Monday to Friday for office workers. 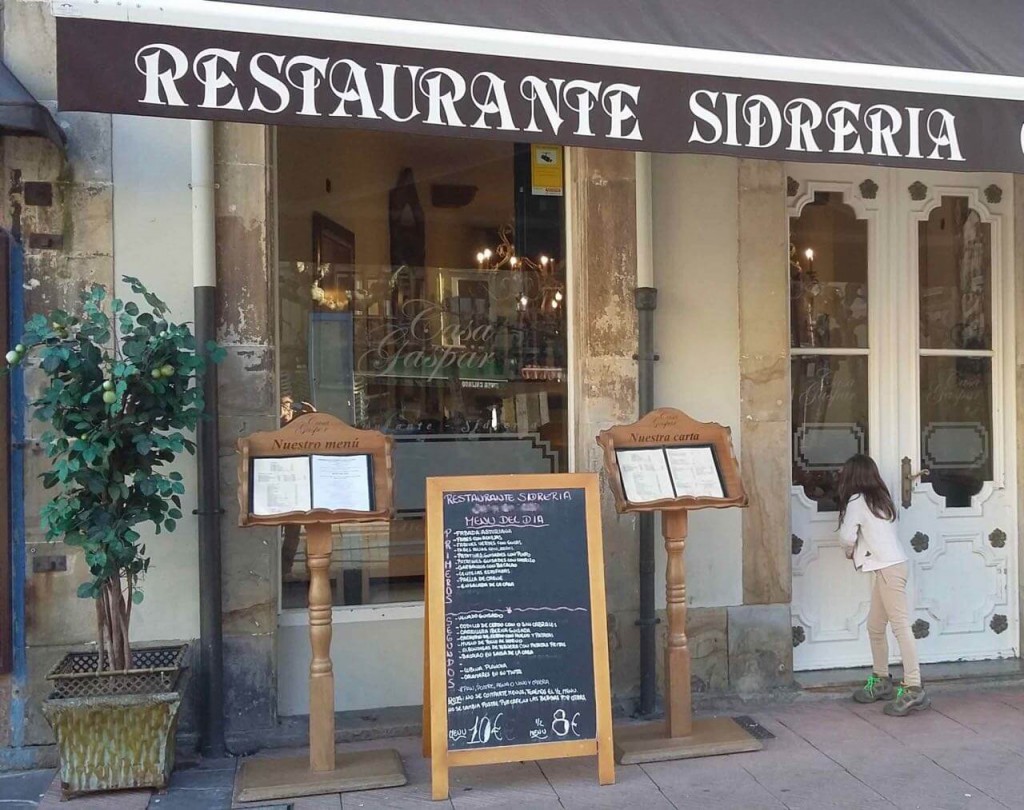 When you see these boards outside a restaurant, they are probably open.

Very important for children and anybody who didn’t eat a three course lunch, this is what is known in Spain as the ‘merienda’. In the summer months, pick up some fresh fruit from the market or have an ice-cream from an ice-cream vendor and in winter, look out for churros with hot chocolate. If it feels like gluttony, remember you’re next meal is at least 3 hours away. 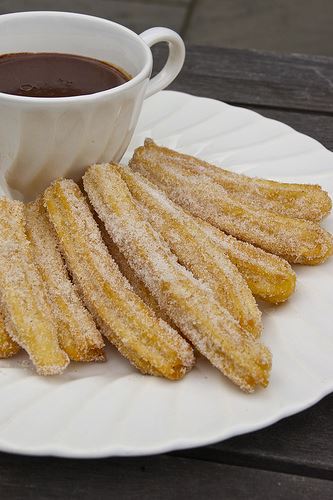 6 After Work Drinks & Tapas from 8pm+

As per the lunchtime aperitivo, the tapa trays come out again after dusk and can often replace the evening meal. After two or three tapas, you won’t be able to eat much more – especially if you’ve have a large lunch or a significant ‘merienda’. While you are out, try to order different wines by the glass which is a great way to try different winery regions. We recommend sampling at least one wine from Rioja, another from Ribera del Duero, from Rioja Alavesa also and at least one from the Rias Baixas too. And remember, it’s commonplace to move from one bar to another so don’t be too concerned about sitting down. If you don’t find a table this time, you find one in the next place – or the one after that… 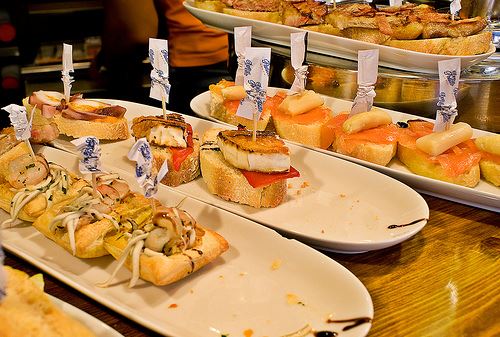 Tapas are useful if you wish to eat an early and informal evening meal. Photo credit: Anvica via photopin cc

Depending on what you’ve eaten beforehand, you have many options for your evening meal including shared platters of food called raciones in a bar or tavern. In a more formal restaurant setting, if you aren’t very hungry, you can either share a dish or two – or ask for half portions. But if you’ve had a light lunch, or no lunch at all – explain this clearly as waiting staff will not expect their customers to be ordering large quantities of food at night. 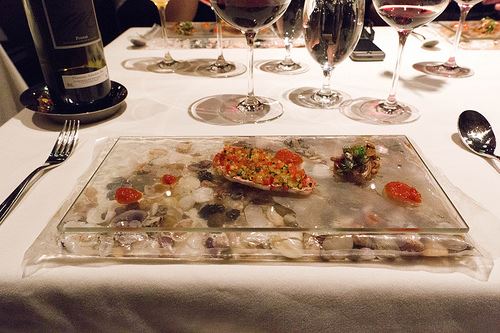 At roughly this time, Spaniards switch from drinking wines or beers to spirit-based drinks such as a gin & tonic, a mojito, a rum and coke or one of the many local specialities such as a Pacharan in the Basque Country. This often co-incides with a change of location away from the foodie bars to the music bars, Jazz bar or open-air bars. One piece of advice – the measures are very generous! 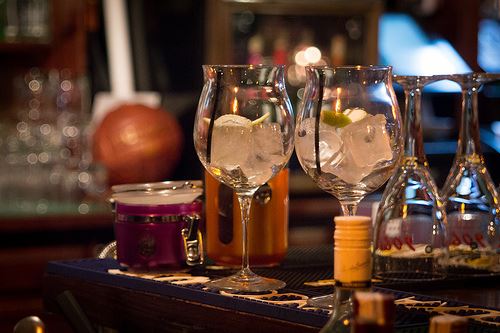 9 Pro-Tip if you find yourself peckish in between mealtimes…

• Find a bar with Spanish tortilla – you’ll usually see it behind the counter under a protective glass so you won’t even need to ask. If you can’t find anywhere with tortilla, ask for a ‘bocadillo’ which is a baguette usually filled with a cured meat and/or cheese.

• All-day tapas restaurants, which you’ll find in the larger cities, will take the edge off your hunger. Patatas bravas or croquetas will usually do the trick.

• Ask your hotel about early or late dining. Hotel restaurants can offer dining from as early as 8pm. And if you need late dining – that’s even easier. Many restaurants will accept reservations up until or after midnight.

• Most towns and cities will have great delis either as a standalone store, inside a supermarket or at a stall in a food market. Pick up a half baguette (ask for media barra) or some breadsticks (palitos), ask for a few slices of cured meats (or buy them pre-packed), grab some cheese and olives – and bring it all back to your apartment or head to the park for a gourmet picnic.

• Get online. We searched The Fork (known here as ElTenedor.es) for restaurant reservations in Barcelona for 7pm and many restaurants were available. For more details on this online reservation system, see our post. 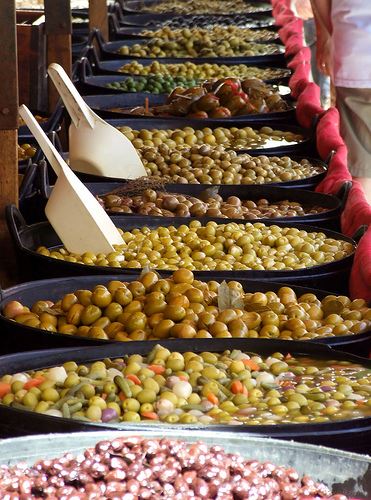 Pick up some olives, cured meats and cheese at a deli or food market to keep the hunger at bay if you miss a meal. Photo credit: SantiMB via photopin cc

Feeling sluggish, jet-lagged or you’re on a controlled diet and want to order something simple?

• Almost all restaurants will be able to rustle up a mixed salad – ensalada mixta – as a starter, whether it’s on the menu or not.

• The lightest option for a second course would be a thin steak – filete a la plancha – or the grilled fish or grilled prawns – pescado a la plancha or gambas a la plancha. If these options can’t be accommodated, ask for something light ‘ligero’ or a ‘media porcion’ – a half portion.

• Order fruit for dessert or skip it altogether and have a coffee, decaf coffee or herbal tea which is called an ‘infusion’. 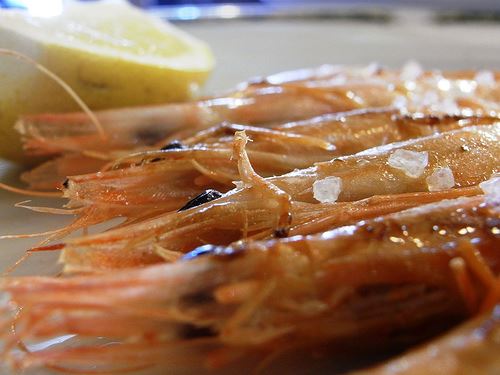 A light supper of grilled fish or seafood can be a good option if you have little appetite but have made a dinner reservation. Photo credit: jlastras via photopin cc

Want to learn more about Spain’s Gastronomy? Read about the tradition of sharing meals in Spain, Spain’s 10 Unmissable Dishes, why we recommend taking a food tour, our food guide for families, and our post on the artistry in Spanish Gastronomy and quirky food customs in Spain.